Despite helping to organise the event for clubs all over Hertfordshire the club’s women’s team were fifth out of 17, the men ninth out of 21 and William Morley had a good run in the under 17 race. 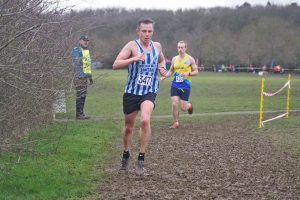 Many other Spartans enjoyed the event and the satisfaction of taking part in such a high standard event.

Huge thanks to Sophie Cowan and Ken Jude who worked in extremely trying conditions to get everything together for the event.

Fairlands Valley Spartans raced at least 2,400 kilometres over the Christmas and New Year period.  There were hundreds of participations – 377 Spartan runs.

The Knacker Cracker took place on a surprisingly warm and dry first day of the year.

Spartan ROS INGRAM took 1 hour 17 minutes 7 seconds to get round.  She said, “This sounds less good for a 10km, before you know it is basically running up and down different sides of 224 metres high Boxhill in Surrey.”  There’s a total of 500 metres (1667ft) of climbing.  The organisers describe it as “a run for hearty man fellows and lady fellows”, mostly on rough tracks, and including superb views over the North Downs, the Mole Gap, Denbies Vineyard, and Dorking.

Many people were celebrating the new year the night before and there were plenty of fancy dress costumes so this was not a super-serious event, but a fun and friendly one.  Ros was 80th overall and 11th woman, with the unfair advantage of not having drunk the night before and being reasonably well-slept.  There were 210 runners.

Two Spartans combined the New Year’s Day 10K in Hyde Park and Kensington Gardens with the enormous New Year’s Day Parade.  Despite racing a 5K; ten miles and leading a bike ride in the previous days JIM BROWN got round the 10K in 50 minutes 4 seconds and was pretty happy with that.  He was 246th.  PENNY SCHENKEL was 413th in 60 minutes 16 seconds.  There were 502 finishers.

After the race they did the short walk past Green Park to see London’s New Year’s Day Parade.  The 10K is essentially flat.  The first woman finished in 34:47!  Putting the two events together could be an attractive option for 2021.

SIMON JACKSON did the Ely 10K on Tuesday, New Year’s Eve.   As always it was undulating and had 3k uphill in to the wind from 5.5K.  He was amazed to run a new personal best (PB) and finished in 34:47, 11th overall and second in Age Group, though picking up the first place prize on the on the one runner one prize rule, which gave him a very pleasing and surprisingly end to the year.

Breezy conditions as usual for the end of year Ely 10k but that still did not prevent some excellent times on the fast course.

On New Year’s Eve Tim Robinson ran the Flitch Way Marathon.  The route is out and back from Braintree Discovery Centre through Dunmow to Takeley Street and back, mainly following disused railway line.  The recent rain meant that many sections of the run were very muddy.

There’s a strict three hour cut off at half way and 6 hour at the finish.  Unfortunately Tim left his watch at home, and other than an aid station at 6 miles, there are no distance markers and so had no real idea of progress up to halfway.  He made the turn around in 2:28 with 30mins to spare.

The return leg was extremely hard.  Hungry, cold, tired and confused he was sure he was taking walk breaks too often and going far too slowly.  However he made the finish within the cut off time finishing 103rd of 118 in 5:24:25

The first Saturday Parkrun of the year continues to see high numbers turning out for various venues.  Stevenage saw the second highest turnout in history with 532 runners of which 41 were Fairlands Valley Spartans.

A total of 51 Spartans headed out to 11 different venues, covering three home nations.

Jenny GARRET also ran at a new venue Temple Newsam with a time of 30:55.

Attendance records were broken across numerous parkrun venues including Stevenage with 562 finishers.  Of the events where Spartans attended records were broken at Bournemouth, Stevenage, Buckingham (west of MK), Whinlatter Forest, Folkestone, Panshanger, Ellenbrook Fields and Irchester Country (near Wellingborough).

Many Spartans took the opportunity to do a double parkrun close to home eg Panshanger / Stevenage.  Many ventured further afield.

Chris Holland was in Keswick running new PB of 22:59 in his second run there.  Then he moved on to celebrate his 100 milestone run at the much more challenging Whinlatter Forest (28.33).

Tim Robinson completed his 149th and 150th parkrun at Panshanger + Stevenage with his dog Oscar for company.

Full Spartan results can be found below.