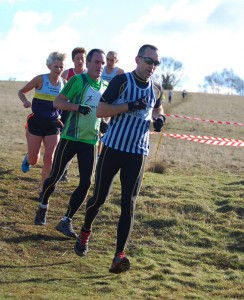 From October through to February, the club’s main focus shifts from the EVAC and the Midweek League Competition (MWL) to Cross Country (XC). We participate in the Sunday Cross Country League and also support additional races e.g. County Championship and Veteran races.

There is only one mandatory pre-requisite in participating in any cross country race – You must wear your club vest.

Many of our members probably have not run cross country since school. For some, not a happy memory. Other members may view Cross Country as exclusive to the ‘elite’ and fear their ability would hinder or embarrass themselves. Instantly, future participation is labelled with resistance and negativity.

Fear not, today, the Sunday Cross Country League is a friendly supportive environment, catering for all abilities from the ‘elite’ to those just wishing to complete the course, with age groups ranging from senior men and women right through to Men’s Vet70 and Women’s Vet65. Points are awarded at every fixture on a team basis, and individually per age group.  Over the course of the league it is possible for a beginner or an intermediate runner who commits to running 4 or more league races to beat a quicker or more experienced runner of the same age group who runs less than 4 races. 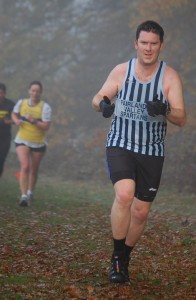 Everyone, regardless of age or ability, can participate, have the optimistic potential to progress, achieve personal goals and more importantly enjoy themselves with in a friendly club environment. As a club we actively encourage our members to take part in these races, nobody should feel they are not good enough to represent our club.

Every race you run, you accumulate points not just for the individual age group competition, but more importantly, regardless of your capability, your effort and commitment are exclusively and unselfishly contributing to a team objective. Back yourself, believe in your ability and support your team mates at the start, during and at the race finish.

The benefits of Cross Country

All races are held off road, so there is absolutely no danger or interruption from traffic intervention.

The major physical benefits of cross country races or even just running off road are associated with power, core strength and stamina. There is a symbiotic relationship between all 3. 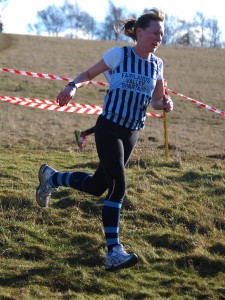 By running over softer surfaces, or through long grass makes you work harder than running on pavements or asphalt as you have to lift your ankle higher or power through the running surface. The increase in effort not only burns more calories but requires more muscular effort. An indicator of a tired runner or a runner with inefficient muscle development is the dragging or grazing of feet across the running surface, which unless rectified, the runner will potentially trip up resulting in potential injury. The development of these muscles will produce power and alleviate potential incidents caused by poor muscular development.

As more effort is required over the uneven undulating terrain in contrast to road running, your stamina will improve.

As cross country is conducted over rough or uneven surfaces, you are forced to keep your balance which means engaging your core muscles. The development of core strength through cross country or other exercises will help to keep your body upright and strong, preventing sagging, making your running more efficient. 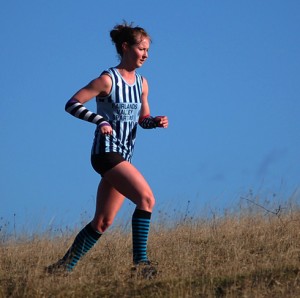 A further benefit of cross country is that you are running over softer surfaces and not pounding the pavements. Yes, there is a school of thought that says there is a greater risk of twisting an ankle off road, but the threat is no worse than tripping off a pavement kerb or in a pothole. Uneven terrain does help develop foot and ankle strength. If you do not warm up and condition your body properly before a race, the threat of potential injury is just the same regardless whether it’s on road or cross country.

Improvements in power, strength and stamina through continuous participation in the Sunday Cross Country League will reap rewards when you return to road running in the Spring. Many  are fearful of the timing of the Cross Country season within a typical spring marathon training programme and dismiss cross country in preference to focussing on distance based training.  Cross country can successfully be included in a marathon training programme, reaping the rewards of cross country running whilst fitting in distance runs between the races.

Presently, Fairland’s Valley Spartans participate in the Sunday Cross Country League. Currently over 15 clubs compete in the league including other local Hertfordshire clubs such as Royston Runners, St Albans Striders and Welwyn Garden City Runners  who we compete against in the MWL, as well as clubs from North London including London Heathside and Edmonton. 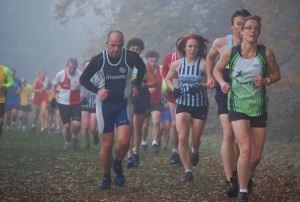 Currently all Sunday Cross Country League races take place locally on a Sunday at 10.30am, once a month, from October to February.

Previously the season has started at Cheshunt, a beginner friendly course with the remaining 4 races being located at any of the following locations: Trent Park (Not the same course as the MWL race), Cassiobury Park (Watford), Digswell/Tewin (Welwyn Garden City), Chicksands and Royston, probably by far the hardest and hilliest course in the league, but a great sense of achievement.

More detailed information about each race will be posted on the Forum.

All of the Sunday Cross Country League races are free to enter, regardless whether you run one or all of them. There is a league affiliation fee which FVS pays on your behalf as part of your club membership.

Apart from the mandatory wearing of your club vest, there is no requirement to fill out an entry form or enter in advance, and you do not require a race number. Nearer the time all you have to do is either; post your interest on the club Forum, or inform the relevant team captain or just turn up on the day. Whichever method, run, support your club and enjoy yourself.

Dependent on venue, the distance of the Sunday Cross Country League races vary between a minimum of 5 miles up to 10km (6.2miles).

There is one race, consisting of a massed start with men and women of all age groups  and ability, racing each other over the same distance.

When you have finished the race, you will receive a numbered disc or similar object from an official in the finishing funnel. This is your position against the entire field regardless of  sex or age group. An FVS official will complete an official results form providing names, age groups, times and finishing positions. Presently there is no chip timing in Sunday Cross Country League races. The race administrator will compile the official race result from each clubs official results form.

Over the duration of the league from October to February, runners will score points for every race participated in, derived from their finishing position. There are team and individual awards presented at the last race.

A men’s scoring ‘A’ team will be the first 8 runners regardless of age category or ability to finish from each club. If there are more than 8 runners taking part, a ‘B’ team can also score. The ‘B’ team will consist of the next 5 runners to finish. In order to qualify for the ‘B’ team competition, we must field a full ‘B’ team in the opening fixture, normally Cheshunt and at least a partial ‘B’ team in subsequent matches.

A women’s scoring ‘A’ team will be the first 5 runners regardless of age category or ability to finish from each club. If there are more than 5 runners taking part, a ‘B’ team can also score. The ‘B’ team will consist of the next 3 runners to finish. In order to qualify for the ‘B’ team competition, we must field a full ‘B’ team in the opening fixture, normally Cheshunt and at least a partial ‘B’ team in subsequent matches.

By supporting your team, you are also accumulating individual points. Points are awarded per age category and are derived from your 4 best finishes from the 5 races:

Regardless of your ability, if you run 4 or all 5 races your dedication will be rewarded with a great final league position per age category at the season’s conclusion, often coming as a surprise to that runner. For every race you run less than 4 e.g. only 1, 2 or 3 races, you will be penalised for every race missed.

The following examples have been derived from runners participating in the Sunday League demonstrating how dedication and commitment can overturn ability and provide a great result over the duration of the league:

(Criteria have been removed so that the runner remains anonymous)

Each example completed 5 league races, with their best 4 finishes producing their final league position. All 3 runners, particularly Runner B profited from the non participation of other runners in their age groups, who ran 3 races or less, therefore allowing the 3 examples to be elevated much higher up the league then they were probably expecting. 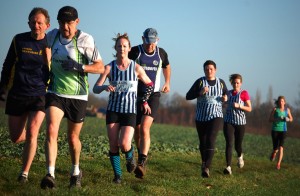 Surfaces can vary between parkland, bridal, grass and shingle paths, farmlands, woodland and fields, all varying in gradient, but definitely no road running.

Each venue’s terrain is different:

Cheshunt: Parkland with long up and down hill grassy drags and bridal paths.

Trent Park: Mixture of grassy parkland, woodland with a mixture of slopes.

Cassiobury Park (Watford):  Majority through woodland slopes, but starting and finishing in parkland. 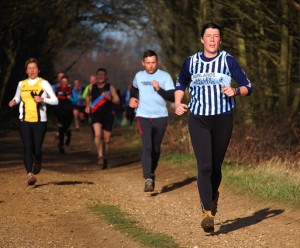 The only special clothing you will require is the mandatory wearing of your club vest. Not wearing your club vest could potentially lead to your disqualification and have adverse repercussions for your team position. Apart from your club vest, you can wear whatever you like dependent on the time of year and the weather. Just make sure you have something appropriate to warm up in and some warm dry clothes for after the race.

Road or trail shoes are sufficient to participate in the Sunday Cross Country League.  The choice of shoe is personal, dependent on expense, the time of the year and race. If you have both, you can use your warm up to decide on footwear for the race.

Road shoes would be fine on dry terrain, but may not offer enough grip after periods of prolonged rain. Cross county spikes are only ideal for races run entirely on soft ground, however, any stretches of hard or stony surfaces and they will get damaged. Studded road shoes or trail shoes offer more grip than road shoes under wet conditions, are more versatile and are probably the preferred and most popular choice of shoe in the league.

The following is a guide from previous races, but race conditions are changeable and dependent on the weather. At Cheshunt a road shoe is normally compatible with the early Autumnal conditions, unless there is adverse pre-race weather. Trent Park is similar to Cheshunt.  Trail shoes are probably best for Watford and Digswell. Royston is on chalky porous terrain, so a road shoe is viable. If Chicksands is dry, a road shoe is fine, but if wet, a trail shoe would be a better option. 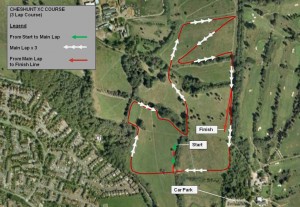 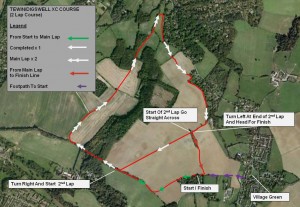 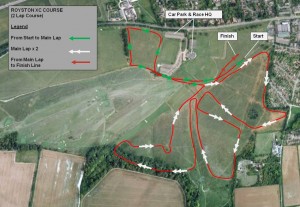 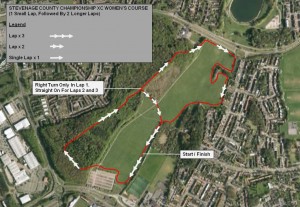 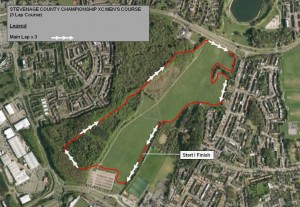 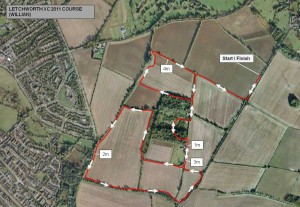