A benign almost balmy Buntingford was waiting for Fairlands Valley Spartans team of thirteen in the Year End ten mile race on Sunday.  The hills were still there but there was no sign of the ice and snow or wind experienced in previous editions of the event.

Spartan ED HARE said it was a great morning to be running and he was looking forward to running the scenic and undulating Buntingford course with Steve Dobner and Alison Shelley.

It was a recovery run for Ed as he had run 18 miles on Friday and finishing today meant that he had run 40 miles for the week which was a personal achievement in itself.  After a steady start Alison was running really well and it soon became a PB (personal best) hunt.  Ed and Steve Dobner were amazed at how strong she was and we kept spurring her on to finish which she did in 1:24:57 a 10 mile personal best for Alison and a course PB for Ed and Steve.

Susan McAneny and Lee Pickersgill both finished in 1:25:45; that’s a 10 mile personal best by two minutes for Susan and one minute for Lee 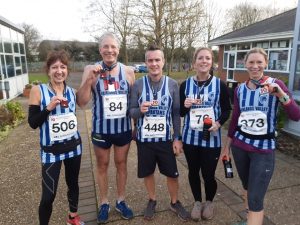 Jim Brown was the fastest Spartan finishing 194th out of the 484 finishers in 1 hour 23 minutes 41 seconds.

Many Spartans enjoyed running with and/or in sight of each other.  Seven finished within about two minutes of each other.  Six, Ed Hare; Alison Shelley; Steve Dobner; Susan McAneny: Lee Pickersgill and Tanya Brazier were within one minute.  Eight were in the first half in the race.  Great team work.

Michelle Reeves had a great race on Saturday.  She was second lady, eighth overall in 69 minutes 1 second at the Lee Valley 10 mile race.

It was ten laps of the Cycling Circuit outside the velodrome.  Really well organised event by runthrough.co.uk indoor toilets which were clean and no loo queues!

Michelle said she didn’t mind it being laps, just next to the iconic Olympic Velodrome.  Michelle entered on Boxing Day (just two days before the event), so she could be in the running for the club long course championship and was very surprised to have sub-7 minute miles in her legs after the Christmas indulgence!

Wendy and Taher Tharani were at the same venue but for a half marathon.  This was there last event of 2019.  Wendy said, “I’m not sure who thought it was a good idea to run around the Velo park 13 and a bit times? 13 undulating 1 mile loops.”

Spartans YUKO GORDON and JIM BROWN were at the last Last Friday of the Month Serpentine 5K of 2019 in Hyde Park, London.

Yuko achieved an incredible age grading of 96.3%, winning that competition easily by finishing in 21 minutes 20 seconds.

Jim took advantage of the mild, overcast and still conditions to run his fastest road 5K of 2019 with 24 minutes 33 seconds.  It was dry but wet underfoot.  Needing at least six finishes to qualify for the series he managed eleven during the year, the missing one due to collecting his number immediately before the London Marathon.

Spartan Grant Ramsay won the Letchworth Parkrun in a time of 20:32.  A good performance in muddy conditions.

A few days earlier Ramsay took part in the Pirton Boxing Day (Early) Race in a time of 16:57. This was over 2.50 miles in difficult underfoot conditions.

With a better turnout, thirty runners, the men improved to fifth “A” and fifth “B” team.  They are now sixth in the league.

All sixty six Fairlands Valley Spartans wanted for Christmas was to join in the festive Parkrun fun at 8 different locations around the country on Christmas day. Even though it’s cold outside, It has been a record breaking Parkrun Christmas at Stevenage, Panshanger and Norwich with Spartans contributing to record number of Parkrunners with respective attendance of 453, 582 and 1358.

It’s the most wonderful time for PBs, milestones and newcomers at Stevenage.

Christmas number one goes to Jonathan PARR finishing as first man with a time of 17:39. The fastest female Spartan this week was Tracey JACKSON who ran her first ever Parkrun in a time of 23:31.

Congratulations to runners who achieved milestones this week including Martin BLACKBURN (20th), Tracy PEZ (50th) and most notably, Darren EMMERSON who celebrated his 100th Parkrun in style with chocolate and bubbly after. Special mention to David SCOTT who brought along homemade sausage rolls for the occasion.

Fifty Spartans ran the first Parkrun after Christmas. Perhaps still full of Christmas puddings and turkey, there were no PBs achieved this week.

Spartans at the Year End Ten