Fairlands Valley Spartans are active participants in cross country with teams in a local league and in the county championships.  On Sunday 48 Spartans, 21 women and 27 men raced in the fourth Sunday league fixture of the season which was at Watford.  Both men and women raced over the same distance which was about six miles.

This was on a tough undulating course in Cassiobury Park, Whippendell Wood and on Jaccotts Hill. 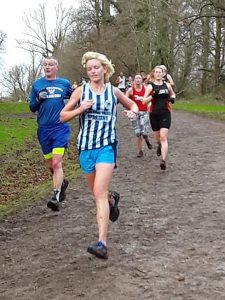 There were outstanding performances from SIMON JACKSON, in the top ten overall with ninth out of 472 finishers in 37 minutes 8 seconds and ELLA-MAY HARDS fourth senior woman and 112th overall (i.e. out of all the men and women) in 43 minutes 31 seconds.

There was another great second place out of nineteen for the Spartan women who should have second place for the season secure if they get a good turnout in the last race.

The competition for the women veteran runners (all aged 35 or more) is exciting. With only one race to go the Spartans could win, come fourth or anywhere in between.  Currently FVS are second on 67 points with St. Albans leading with 68 and Trent Park third on 65 and little to divide them on cumulative race positions. 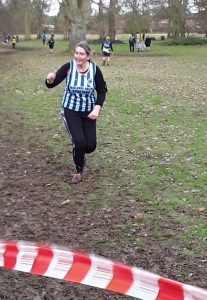 The Spartan men are sixth across the board.  Their “A” team were sixth on the day as were the “B” team and the veterans’ team.  After four races the “A” team are sixth; the “B” team sixth in their category and the veteran men sixth!  To complete the picture the Spartans combined overall position in the league is sixth.

The fifth and final fixture will be on Therfield Heath, near Royston on Sunday 9th February.

More than 100 Spartans enjoyed the club’s 20:20 training session on Tuesday.  Are you running the London Marathon, or another Spring marathon?  If you join Fairlands Valley Spartans now you’ll get access to all the club’s free training sessions, on five days in every week; participation in the marathon hub; a training programme and advice.

All Spartans get free use of Ridlins Athletics Track at 9.15a.m. on Saturday morning.  That benefit alone is worth about £100 a year.  To join the Spartans visit www.fvspartans.org.uk or come along to a Spartans training session which include Tuesdays and Thursdays at 7p.m. from Marriotts Sports Centre, SG2 0AN.  Sign up now and you’ll be a member until April 2021.

YUKO GORDON last marathon of 2019 was the Great Barrow Challenge Marathon in Suffolk which she finished in 3 hours 46 minutes 32 seconds on 29 December.

The route was a single lap, all smooth tarmac.  Although the roads were not closed there was hardly any traffic but the race was very hilly, going through posh villages near Bury St. Edmunds.  The start and finish was from Suffolk Running Centre, very relaxed atmosphere and very well organised.

The fastest female Spartan parkrunner was Grace BROWN in 23:24 running at Bedford for the first time.

Tim SABAN [20:32] achieved a Personal Best [PB] running in Bedford.  Congratulations to everyone.

The 190th Stevenage parkrun set another participation record with 586 runners, that’s 24 more than the previous record which was set on New Year’s Day.  Wow.