Fairlands Valley Spartans WON the inaugural track challenge in Stevenage on Wednesday night.  Teams consisted of five runners and every team had to include at least one woman and one man.  Everyone ran 5K, twelve and a half laps of Ridlins 400 metres track. 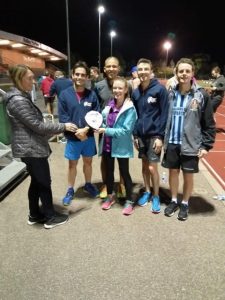 This was a novel but enjoyable event with chip timing on a track and a total of 53 people running.

Spartan Women Third In the East of England

The Spartan women’s team were third in the East of England veterans track and field championships on Sunday.  Only two points behind second place. 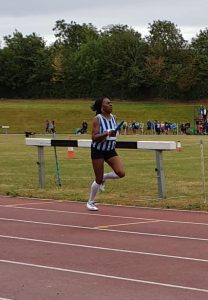 They won their division of the league on the way to qualifying for the final.

Monica won all her events, High Jump, Triple Jump, 100m, Javelin Throw and a leg of the W50 relay.  The W50 relay team of Tessa Stephenson, Sharon Crowley, Monica Brown and Alison Wood remained unbeaten throughout the season and the final, winning comfortably.

There were also individual wins for Christine Lathwell, Alison Wood and Tessa Stephenson.  Andrea Westcott did a PB in the W35 Hammer. Callie Chapman and Karen Broom did their first final.  Suzy Hawkins covered the W35 400, 800m and relay.  Cathy Craig covered the W60 events with Sharon. A very effective team. 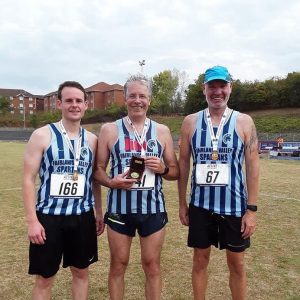 JIM BROWN found Sunday’s Welwyn Autumn Half Marathon hard but he can’t have been struggling as badly as others in his age group as he WON the veterans 60 plus category.  Jim was pleased and surprised to win, it was by five minutes, and wondered what the others were doing.  He finished in 1:55:29.

Fiona and Chloe run the Forest of Lights

Spartans FIONA CLARKE and CHLOE CHAPMAN enjoyed the Forest of Lights event in Thetford Forest on Friday night.  They both ran six laps in 2 hours 2 minutes 34.6 seconds for 109th and 110th position. 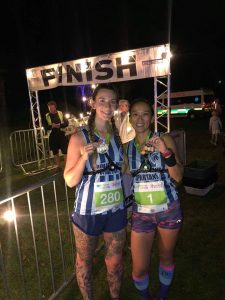 Fiona said, “It has a week of a lot of running for me since the 5 Rivers Challenge last Sunday.

Chloe Chapman and I ran at a new event, the Forest of light run last night (Friday 20th Sep) at Thetford forest. The idea is to run as many 3k loops in a time limit of 2 hours, the last lap must start before the 2 hours ends.

As it was a night run, the forest was at places lit with fairy light display, not bright, so body/head torches were essential. The event could have been organised a bit better. The registration took so long and was quite chaotic we missed the start by 12 minutes, the announcer thought we were the first runners back from the first loop. That made me chuckle!

I also learnt that finding your way back to the car in a forest in the dark is not an easy feat! I think we did an additional 2k just by walking around searching.

Despite the mishaps, the run itself was fun and the marshals were fabulous.  We completed six loops in 2 hours 2 minutes 36 seconds so we are really pleased with our effort.

With slight improvement, I think this could be a really good event. It hasn’t put me off going again.

Having got home past 1am, I still managed a Parkrun Saturday morning. I think a week off running may be justified.”

At the Rutland Water Half Marathon Spartan Richard Cowlishaw was 67th out of 525 in 1 hour 44 minutes 58 seconds.

This was his first half marathon event in five months.  Richard was out for two months in the summer due to a neck injury and started running again only three ago.

The Stevenage Half Marathon will be on Sunday 3rd November.  It’s been organised since 1984.  Have a look at www.fvspartans.org.uk  Train with the Spartans for the 13.1 miles event.  The route follows the town’s famous cycleways and tarmac footpaths through the parks of Stevenage.  All proceeds go charity.  The charity for 2019 is Mind, the mental health charity.

Two Spartans were on international duty this weekend running in Helsinki and Florence. Sheryl Hann was in Florence, Italy (26.07) and Ros Ingram was one of 40 runners in Helsinki, Finland (25:53).

There was a strong contingent of Spartans in Letchworth with course PBs for David Scott (25:58) and James Nicholls (27:17). There was also a PB for John Roxborough at Aldenham country park (22:27).

A total of 68 runners took part.

A total of 40 runners took part.