Four more Spartans won County Medals in the second evening 5K race at Hatfield.  This open race included the Hertfordshire championships for veterans (women over 35 and men over 40).

Yuko got the highest age graded percentage out of everyone in the race with 96.0%!

(All 25 Spartan results can be found near the end of this release. 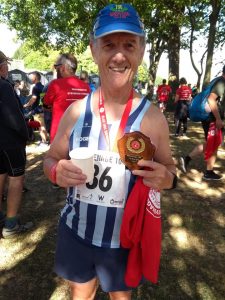 ROGER BIGGS won the veteran 70 plus award in 1 hour 16 minutes 1 second and JIM BROWN was third veteran 60 plus with 52 minutes 25 seconds.

STEPHEN CURRY took part in the Reigate half Sunday and completed in 1:35:44. 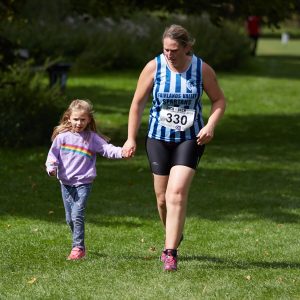 At the other end of the results table, Nicola Hatherly finished 101st out of 107 in the Duck and Dash (a 400 metres swim in Letchworth outdoor pool followed by a 5km run). She crossed the line last, hand in hand with her mini-me but enjoyed every minute of it.  Cries of “This should be easy for a Spartan” didn’t really help, but high fives from small children did and as she was the only one wearing a stripy vest, that has to count for something right?!

On Sunday FIONA CLARKE completed her first marathon, the Five Rivers Challenge.  She was joined by Matt Clarke, Tim Robinson and Hazel Smith. 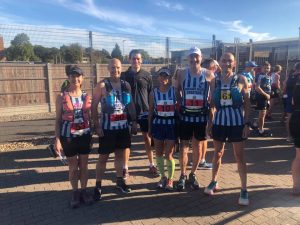 This was a lovely trail marathon, fantastic views with well stocked checkpoints.  The Spartan team finished in 5 hours 56 minutes.

SUSAN McANENY ran the half marathon version of the inaugural Five Rivers Challenge with LEE PICKERSGILL, SIMON SYPULA and CHRIS HOLLAND with a moving time of 2 hours 15 minutes.  Simon said it was a scenic and well organised event.

Also in the Five Rivers half TIM SABAN ran a time of 1:47:16 and came fourth.  He said it was a brilliant event, with an excellent route and signage so as not to get lost.  Tim definitely recommends the race and shall be doing it again next year.

MARTIN RUTHERFORD had his FVS stripes on at Wimpole this weekend at the Wimpole 24 hour countdown event. 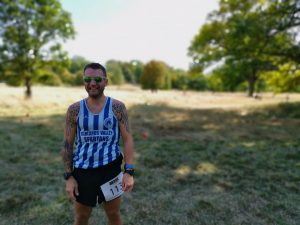 He said, “The weather was hot and I felt cold at night, my strategy went right out the window as it always does.  I was to pace 10 min miles for first 10 Laps and then drop to 9 min miles until 20 Laps and then 8:30 min miles for remainder.  I went out at 8:30 min miles and roughly maintained it up till 40 miles but didn’t maintain my fueling strategy and so blew up at 2:30 am and finished 15 hours later at 3am, 67 miles in and in fourth place.

The Stevenage Half Marathon will be on Sunday 3rd November.  It’s been organised since 1984.  Have a look at www.fvspartans.org.uk  Train with the Spartans for the 13.1 miles event.  The route follows the town’s famous cycleways and tarmac footpaths through the parks of Stevenage. All proceeds go charity. The charity for 2019 is Mind, the mental health charity.

This Saturday’s Parkrun events saw a bumper week for Personal Best (PB) times, eight from a total of 42 Spartans who headed out in the early Autumn sunshine. PBs on the Stevenage course saw DEAN CARPENTER run a time of 19 mins and 15 secs, RICHARD KENNEDY 20 mins and 39 secs, EVA RAMSAY 21 mins and 33 secs as the second woman to finish, JON FILBY 22 mins and 40 secs, NICOLA KENNEDY 22 mins and 50 secs (5th woman overall), CHLOE CHAPMAN 26 mins and 50 secs on her 50th Parkrun outing, and MARIAN MORLEY 28 mins and 02 secs. Further afield JOHN ROXBOROUGH tackled the Houghton Hall run in a PB time of 21 mins and 23 secs.

GAIL MACKIE joined the achievements in Stevenage finishing as the 3rd woman overall in 21 mins and 37 secs and JAMES MCSWEENDY ran his 60th event in a time of 29 mins and 46 secs on the Finsbury course.

Hatfield 5K – All the Spartan results