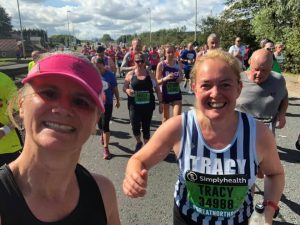 Eight Spartans made the journey to Newcastle to join tens of thousands of others in the Great North Run.

Despite the crowds GRAHAM HOARE ran the 13.1 miles straight out course in 1 hour 48 minutes 59 seconds.

PAUL SHELLEY said, “I ran the GNR in 1.54.05.  Had an issue with my hip (Glute Medius) tightening after two miles but it went pop after 4.5 miles.  Still had a fab day beautiful weather, amazing crowds and a great medal.” 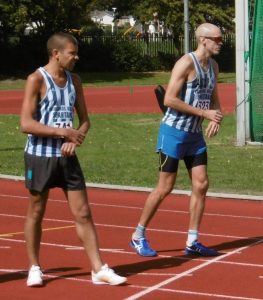 In the second race DAVID HARRIS-CHERGUIT won in 4 minutes 37.84 seconds; ASHLEY KING was third and first woman in 5:17.54 and TANYA BRAZIER fourth and second woman in 5:30:82. 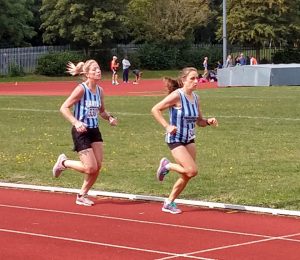 The table below shows the 1500 times for all eleven Spartans in one place.

In the shot RONALD WESTCOTT, a veteran 70 plus, threw 6 metres 92 centimetres.

On Sunday CALLUM STEWART raced the Stirling 10K.  It gives some idea of the standard in the race, which included the Scottish Championships, when you realise that he improved his personal best (PB) by 1 minute 30 seconds to 32:07 but came 41st.

Ratty on the Rat Run

Timmy “The Rat” Robinson took part in the second Baldock RatRun 5K. As the official mascot Tim ran in full rat costume which restricted his vision, making the off road course, including a tunnel, steps, and a stile interesting obstacles to negotiate. Tim completed the course in 30:33 and was 90th.

TAHER THARANI was well chuffed with his first ever full marathon.  He said it was not a super great time, 6 hours 26 minutes, but he was very pleased to finish the New Forest event in 6 hours 26 minutes.  WENDY THARANI came in with 4:42:31.

For the last of ADRIAN BUSOLINI’s three 100Ks in three months, in memory of Paul Guest and running for the Stroke Association, he took on the South Coast Challenge which he finished in 14 hours 15 minutes 27 seconds.  He was hamstrung by my hamstrings at the halfway point, so it might not have been the time he was hoping for; but Adrian had a strong last quarter to finish, and the route was one long series of picture-postcards.

Roger Biggs was off touring again.  This time for races in Ireland.

Firstly on Saturday it was a 10km event in Carrickfergus, where Roger finished in 1:12:10.

The next day It was then a journey South to Dundalk, in County Louth, Ireland, where Roger completed a half marathon in 2:58:30.

At the weekend Chris Tillbrook completed the legendary man versus mountain adventure run in North Wales.  The race starts at sea level in Caernarfon Castle and weaves its way to the summit of Snowdon and down the other side into Llanberis where an array of punishing obstacles have to be tacked, including the infamous Vertical Kilometre around 19 miles into the run, before you can cross the finish line.  Chris completed the 22 miles, 5055 feet of ascent in 5:20, finishing 201st of the 953 competitors.

The Stevenage Half Marathon will be on Sunday 3rd November.  Have a look at www.fvspartans.org.uk  Train with the Spartans for the 13.1 miles event.  The route follows the town’s famous cycleways and tarmac footpaths through the parks of Stevenage. All proceeds go charity. The charity for 2019 is Mind, the mental health charity.

Forty Spartans ran nine different parkrun events on Saturday.  Fastest female this week was Yuko GORDON [23:13], she was the first lady across the finish line at Letchworth.  John ROXBOROUGH [21:12] was the fastest male Spartan in his second appearance at Cassiobury Park.  John also secured a PB (personal best) time for this course. Luke GURNEY [26:57] achieved a PB at Stevenage.

This group of forty Spartans have amassed an amazing 2,261 Parkrun appearances between them.  A magnificent group of seven Spartans have completed more than 100 Stevenage parkruns each.  For example including Saturday’s race Danny SCANLON has now completed 128, David SCOTT -109, Martin DUDLEY -106 and Verity SUTTON-FISHER -101 (Verity has now completed 275 Parkruns in total!).

Spartans at the Great North Run