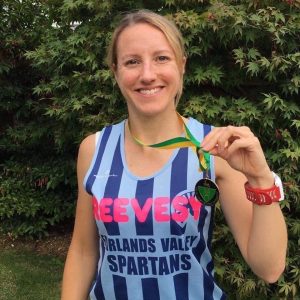 Ten of the fifteen Spartans in the open race were women as were the first four club members to finish.  They were ASHLEY KING, fourth senior overall in 19 minutes 21 seconds; SUZY HAWKINS, winner of the women 35 plus category in 19:31; Michelle in 19:45; and Alison, third woman 45 plus in 20:18.

TIM SABAN was the first man in for the Spartans with 20:27.  He was followed by BARRY OSBORNE second man 60 plus in 20:41 and JIM BROWN in 25 minutes exactly.

The 5K championships for veteran runners are on Wednesday 11th September.

It was great for runners not to have to endure the extreme temperatures of the previous weekend and many Spartans enjoyed the Bedford Running Festival which included half marathon, 10K and 5K races.

PAUL SHELLEY said, “What a great weekend at the Bedford Running Festival.  I ran the Twilight 10K on Saturday evening in a new PB (personal best) of 40.35 which felt great – even got a sprint finish in!  Sunday saw the Half Marathon in which I set a new PB of 1.31.26 (with a stop as both shoe laces came undone) but I had nothing left in the tank for the last three miles!! What an amazing weekend with a great atmosphere amongst the runners, spectators and the FVS family.”   Paul was 133rd out of the 2,516 finishers.

In the half DAVID PATTMAN’s time was 1:44:12 which is roughly eight minutes faster than his previous PB.

Valuable time was lost in the congested first three miles of the half marathon but JIM BROWN cut his time from the previous week by six minutes to 1 hour 51 minutes 51 seconds.

On a bright and sunny Bedford Half Marathon, ROB EVANS beat his two hour target by completing the course in 1:56:47.

Steve said, “On a tight course with not many places to move through the field to start with I was surprised by my PB in the 10K as I didn’t set out to achieve one.  Sunday’s half marathon was run in ideal conditions and although I felt Saturday evening’s 10K I am very happy to beat my PB by over five minutes.  Many thanks to Ed Hare for pacing me round.

ED HARE had a great weekend with the Spartans at Bedford.  He said, “I tried to push as hard as I could during the Twilight 10K and just fell shy of my PB target not helped by the congestion and a very tight course, but I was still very pleased to finish with 47:53 my second ever fastest 10K.  I ran the half with Steven Dobner the next morning and had a great time running with him and finishing with a 1:59:02.”

SAM SIMMONS was another Spartan scoring a double PB (personal best) – 24 minutes 27 seconds in the Bedford 5K and 2:00:31 in the half marathon.

ALISON SHELLEY took five minutes off her PB when she finished in 2 hours 2 minutes 46 seconds.

ROWENA ROUTLEDGE first half marathon as a guide runner.  She said it was a fantastic experience, tough at times, but had a brilliant time and a great result!  They both came in with 2:31:48.  DZENANNA TOPIC completed the 13.1 miles in 2:43:56. 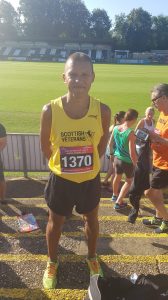 YUKO GORDON was first woman 60 plus in the Maidenhead Half Marathon with 1:36:03,  At ten miles she had run a post 65 PB of 72 minutes and her 5K was faster than Wednesday but the warm sunshine tired her a little towards the end.

Along with Yuko Gordon’s excellent run, GRANT RAMSAY took part and represented the Celtic Nations (combined team from Scotland, Wales and Ireland) against the English Masters.

It was England who went on to win the contest.  Ramsay was happy with his run, despite  re-occurring injury problems and pleased to be the firstt Scottish athlete home, in a time of 1 hour 27 minutes 17 seconds.

On Saturday morning a few Spartans completed the Spitfire 10K at the Hendon RAF base, hilly course with a nice finish though the hanger and under the Sunderland aircraft.  LEE PICKERSGILL’s time was 50 minutes 58 seconds.

In his first official races since the Brighton Marathon last April GERRY ROSEN did a double header with the Spitfire 10K at the RAF museum in 1 hour 9 minutes 22 seconds and then with tired legs the Bedford Twilight on Saturday evening in 1:15:11.

ANDREW PATTERSON ran the Inter Advertising 5k on Thursday night around Regent’s Park. The course was flat but quite twisty.  Media firms seem to generate speedy runners with the top three finishing in sub 16:15s.  A summer of injuries made for a tough slog, he finished seventh in 16:54.

Roger Biggs competed in the St Albans Stampede at the weekend.  The event is a 12 hour ultra, held in the Village of Sandridge near Wheathampstead over a four mile multi terrain undulating course.  Roger took part in the solo event, where each entrant can run for up to twelve hours.  He completed his fifth lap (20 miles) in a time of 6:10:21.  Roger finished in 78th of the 87 runners.

It was dry and sunny with a medium breeze for the Serpentine Last Friday of the Month 5K.  On the two lap boathouse course JIM BROWN improved on Wednesday evening’s time at Hatfield by six seconds to finish in 24:54.

The Stevenage Half Marathon will be on Sunday 3rd November.  Have a look at www.fvspartans.org.uk  Train with the Spartans for the 13.1 miles event.

Another busy parkrun Saturday saw Simon Jackson finish second at Blandford in Hampshire in a new PB of 16:59.

Congratulations to John HARRIS who completed his 50th parkrun at Ellenbrook Fields in 19:32.

Over at Jersey Farm near St Albans John Roxborough ran a new PB (22:34).

Four Spartans were in Bedford, Andy Jay was in Teignmouth and Darryl Stevens at his regular haunt in Brockenhurst.  Barry King and Nick Witcombe continued on Nick’s faffing to 50 parkruns at off road Wimpole.

A full list of the Spartan results is below.