The FVS trio of ASHLEY KING, MICHELLE REEVES and ALISON WOOD won the Hatfield 5K series with more than eleven minutes to spare.  As the awards were based on best out of two of the three races that’s a winning margin of 11 minutes 24 seconds for three runners over a total of 10 kilometres each.  Get inspired – join the Spartans and train with the Spartans.

LEE PICKERSGILL ran the Hatfield 5K in 22:16 which was 50 seconds faster than last year and a 7 second personal best (PB).

Over the three race series TANYA BRAZIER won the women 35 plus category and ALISON WOOD the women 45 plus contest and ASHLEY KING was third overall open woman.  Alison Wood was also the highest age graded runner in the final race with 85.0%.

(Times for all 18 Spartans in the Hatfield 5K race three can be found near the end of this release.

Andrew Patterson took 1st place at the Hitchin 5K with a time of 17:12, completing a hat trick of wins over 3 years. Coming in 2nd place was David Harris-Cherguit with a time of 18:09 which also saw him pick up the prize for 1st male in the MV40 category. David said the course was pretty slippery out there.

They were joined by 13 other Spartans, with 8 of them finishing in the top ten of their age category. Congratulations to Graham Hoare, Marie Colucci, Andy Jay, Stephen Pike, Carole Sheldrick, Monica Smithson, Sarah Pike and Roger Biggs and well done to all who have taken part.

(Times for all 15 Spartans in the Hitchin 5K race can be found near the end of this release.

Two Spartans were in marathon action in Berlin.

Todd Gray completed in 3:25:51 as he continued his quest to run the world’s major marathons. He was satisfied with the time given the long hot summer’s impact on training runs, and heads off next to Chicago in two weeks time.

Yuko Gordon completed the race in 3:19:37 to take over 1st place in her category.

This weekend was the Maverick X-Series Snowdonia race. With four distances from short to ultra; I signed up for the marathon, figuring (correctly) that the ultra may be a little more than I could chew. 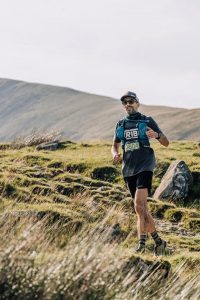 The marathon course is spectacular, but fairly brutal for anyone who spends their time running in Hertfordshire and London. We start with running up Snowdon on the Llanberis Path, then down the Rhyd Ddu.

With that in mind, my naive plan was; get up in a good state, not too quick; survive on the way down. Then only 30km to the finish.

The first part went well. The ascent was uneventful and gave plenty of time to chat and take in the views. But the technicality of the descent was a step beyond my comfort zone. It was amazing to watch those runners who are comfortable in the mountains skipping past on the way down as I was picking my way through the slate and rocks. Lesson one – if you can, try to train specifically for your event. Especially for technical skills.

Anyway… Survive I did!

The next lesson was understanding that time and distance are different in the mountains. Feed stations were roughly every 10km. But I didn’t really bargain for the fact that it could take the best part of an hour and a half to cover that distance in this terrain.  Folks, plan more water and food if you take on this type of challenge.

With Snowdon out of the way and through the first feed station we had the next significant climb up Copper Mine.

When you are in the Welsh Mountains, never think that just because you have ticked off Snowdon that you are on the way home. Although Snowdon itself made up almost half the elevation gain for the day; it’s tourist nature helped as the paths were “easier”. The next major ascent (Copper Mine) was a technical climb and clamber up. But the descent was something else. Picking and tripping the way down steep, rocky, grassy slopes was a challenge physically and mentally. A few tumbles and quite some time later; I was at the bottom.

Through the feed station and then a stunning run along a river bank trail over boulders and rocks. This course is truly beautiful. I haven’t been in Snowdonia for a long time and this was a reminder of the amazing terrain we have not so far from home.

By this point my legs were struggling. The ascents and descents were taking a toll. Cramps and aches had set in. Uphills were definitely for walking. I hooked up with a small group of other sufferers and we pushed each other on.

Another climb, this time boggy with ankle deep mud. And the same on the way down. I normally try my best to keep my feet dry; but it was so hot that the feeling of cold, wet feet was amazing. We had now taken to laying in fords and rivers to cool off… In Wales… In late September…

With my water running low, a mirage formed in the distance. Two kids with a hose and jugs of water. Could they be real? Yes! They were an unexpected lifesaver. Just them and their dad out giving some time to help us all along. Amazing!

Checkpoint three was followed by a very boring 2km road section… Which I was very grateful for as we ticked through a little distance before the final climb. This time it was a long gradual, gravel trail over the ridge. Nothing technical, just head down and run up.

A beautiful descent, another river bath and back through Llanberis to cross the finish line. Medal, iced coffee, bottle of beer. Check!

23rd place in a time of 6 hours 31 minutes. Lesson four. When you look at the course and think “oh I’d like to be done in five hours”… Think again.

A great event. An amazing course. A truly humbling experience. Would I recommend it? Absolutely, and the next time I’ll know what I’m getting myself into.

Maverick Races put on a series of events around the UK. Mostly shorter trail events and with a nighttime Dark Series in the winter. The Snowdon race was part of their X-Series which are longer, or in more remote and challenging venues. Check them out.

Oh yeah… I’ve been walking downstairs backwards since getting back… ”

More images of the event at the address below for inspiration!

In his last outing before a period of rest, recovery and, hopefully, rebuild JIM BROWN was very lucky to find a window in Friday’s downpours to run the Serpentine 5K in 25 minutes 11 seconds.  During the race itself it was mild, dry but wet underfoot and breezy in Hyde Park.  He was third in his category and 189th overall.

Tricia Hopper and Karen Liddle took part in Equinox 24 on 21/22 September.  This is a 24 hour event where competitors run as many 10K laps as they can round the picturesque grounds of Belvoir Castle in Lincolnshire.  The course is part on tracks and part off road with a couple of steep hills.

The weather was very hot this year which made Saturday in particular a challenge but Tricia and Karen managed 11 laps totalling 68.2 miles in 18 hours 39 minutes, one more lap than they had completed in the same event last year.

This is an amazing event for anyone who wants to test themselves with no minimum lap count and a real festival feel.  There are solo, pairs and teams entries and there is a Solstice 24 planned for June next year if any Spartans fancy the challenge!

Things didn’t quite go to plan for DANIEL SUTTON-FISHER at the Rutland Marathon but he did run a sub-four time of 3 hours 56 minutes 31 seconds.

Grant Ramsay and John Harris ran their final track race of the season.

Both took part in the 1500m with Grant Ramsay beating his seasons best by 1 second to record a time of 4:51.  John Harris completed the race in 5:16.

Duncan says, “A nice run around the Hants countryside, starting and finishing in the cricket stadium. A horrible grey, wet and windy morning but I finished in 44:41”

There were 2 Spartans at the Stort 10-mile trail run. David Pattman came in with 1:30:59 and Steven Dobner with 1:33:04. Steven says the condition was better than expected.

Taher Tharani completed the Windsor Half marathon in 2:31:31.

Richard Cowlishaw ran the Nottingham half marathon with a time of 1:42:05. This was his 2nd out of 4 consecutive Sunday half marathons. There was a bit of luck with the weather as it hammered down before and after the race.

John Nelms ran the Budapest marathon, a fast flat course up and down the banks of the Danube. He finished in a comfortable 4 hours 18 minutes for his 69th lifetime marathon, affected by a course in full sunshine with temperature up to 28 degrees.  He will be heading to Bournemouth next weekend for his 70th marathon.

Even though it had been raining heavily overnight, it was a rather warm autumn morning for the 31 Fairland Valley Spartans who headed out to 8 different venues for Parkrun on Saturday.

Trudie MOLLOY recorded a new PB of 26:03 on her second Parkrun outing, trying out a new venue at Pocket.

Seven Spartans ran at a new venue this weekend with special mention to John ROXBOROUGH who ran at Richmond on Saturday.  He has tried out a new Parkrun venue every week consecutively since 15th June 2019. A 16-week new venue streak has helped John reach a special milestone of 120 Parkruns in total. Congratulations John!

The Stevenage Half Marathon will be on Sunday 3rd November.  This will be its 35th anniversary, having been organised by the Fairlands Valley Spartans since 1984.  About 250 people have already entered.  The route follows the town’s famous cycleways and tarmac footpaths through the parks of Stevenage.  All proceeds go charity.  The charity for 2019 is Mind, the mental health charity.  Train with the Spartans for the 13.1 miles event.  Have a look at www.fvspartans.org.uk

All 18 Spartans in the Hatfield 5K Race Three: