A massive 74 Spartans ran in the Mid Week League race at Harlow on Wednesday.

On the night the women’s team of Suzy Hawkins, Michelle Reeves, Gail Mackie, TANYA BRAZIER 45:24; Yuko Gordon; EVA RAMSEY 47:17; TRACY PEZ 50:39 and ROS INGRAM 52:07 were second only two points behind Barnet.  After two races they are second overall, 364 to 352.  It would only take one more the club’s faster women to be able to get to the next two races for the Spartan women to move into first place.

The club’s veteran men were second and the combined FVS veteran men and women won.  After two races the club are third overall in the league with the potential to move up to second.

The course was arguably a bit narrow for the number of runners, particularly in the middle third of the field, and the weather conditions meant it was very dark in places.

The fixtures are coming thick and fast.  Race three will be in Watford this Wednesday evening 12th June.

(Times for all 74 Spartans can be found near the end of this release). 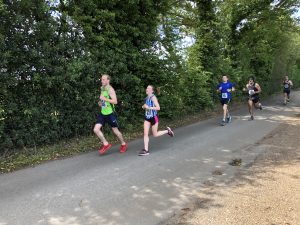 GAIL MACKIE was fastest of the nine Spartans at Sunday morning’s hilly St Albans Half Marathon.  She was sixth senior woman in a new personal best (PB) of 1 hour 34 minutes 16 seconds and 138th out of 1,981 finishers.

DUNCAN FLOUNDERS ran the above today, finishing in 1 hour 50 minutes 5 seconds. Thought the course was tough, lots of hills on a warm day. Ice lolly at the end was much appreciated!

LEE PICKERGILL completed the St Albans Half in 1:51:14. He said it was a nice challenging course but he still managed a PB by almost 5 minutes.  Race organisation was excellent with lots of happy marshals lots of water stations and an ice lolly at the end.

In the scheme of things it wasn’t a great time for JIM BROWN but after some weeks of struggling for form he was pleased to improve on his previous half marathon effort by 14 minutes to finish in 1 hour 53 minutes 48 seconds and to record a significant negative split (second half faster than first half) despite being unable to train properly recently.  He said the frequent water stations were very welcome on a warm day.

TIM ROBINSON ran his 50th half marathon at St Albans. He has been concentrating on the mid week league 10K races and only decided to enter the half on Monday.  Aiming for a comfortable sub 2 hours, the combination of a hard race on the Wednesday night, together with the hills and heat took their toll and he lost a lot of time at mile 10 to finish in 2:03:59. 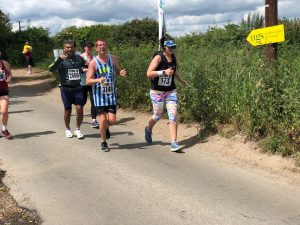 “Amazing half marathon” said LEE PIROTH who got a time of 2:26:39.  The hills weren’t as bad as he thought and overall he had a good run.  He stuck with the 2:30 hour pacer and she was amazing the whole way round giving great support to all around us!  Crowd support was good too

ASHLEY KING was ninth overall and first senior woman in the St Albans 5K with 20 minutes 5 seconds.  There were 482 finishers.

Erica said it was a well organised and supported race including ten 10 water stations and a number of sponge stations.  It was a hot one with no shade.  She finished in 2:00:2 after stopping to help a fellow runner.  Angie also stopped to help another runner.

On May 26th Spartan McCullagh Reece McCullagh started his Run Britain attempt, starting from John O’groats and finishing at Lands End – Reece will be running just over 1000 miles, all of it totally unsupported,  carrying all his kit needed for the epic journey.

Incredibly by Sunday 9th June Reece has covered 425 miles in 15 consecutive days of running, showing immense determination despite non-stop rain for 11 of those 15 days and needing to attend to a number of problem blisters on route.   Currently running through the Lake District,  Reece is still very upbeat and looking forward to continuing the journey towards the West Country and eventually onto Lands End. 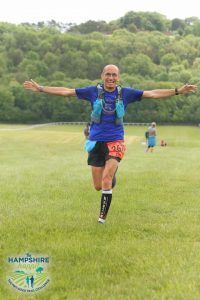 This was a tough off road marathon with plenty of hills and stunning scenery. The medal was in the shape of a bottle which had an opener within it . Also all the finishers of the half and full received either a half or full pint glass depending on the distance raced.  Tim’s official time was 4 hours 6 minutes 1 second.

PAUL JENNINGS completed it in 5 hours 33 minutes 12 seconds according to Garmin time,  chip time will be a bit faster.

For a benchmark Paul’s current predicted ‘normal’ marathon time would be about 4 hours 40 minutes  based on his 10K personal best (PB).

This is Paul’s third marathon but his first in 16 years and his first trail marathon. 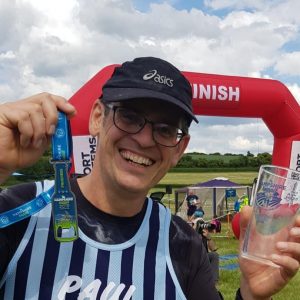 Paul said it was a run with some amazing views, but some serious hills the first of which (and the steepest one) comes just 0.9 miles into the run and it has an elevation of 180 feet over just 0.1 miles.  Also the finish medal is pretty awesome as it doubles up as a bottle opener and finishers receive a Hoppit pint glass and a pint of beer that brewed locally.

MARTIN RUTHERFORD was at the “Last One Standing” event at Knettishall Heath, Thetford.

51 runners started at 12pm on Saturday in the rain and ran around a four mile loop.  The terrain was light trail through a natural reserve with very little hills.  The key strategy was to complete the loop in around 50 minutes so that you were back in time to start the next loop on the hour, every hour.  Martin’s strategy was to run to how he felt which meant running at the front of the pack and coming back to the start /finish first nearly every time for 40 odd loops.  Thus he would average in having 24 – 20 minutes to spare after each loop.

Runners started to drop off in the early hours of the morning, one fell and dislocated his shoulder.  Ten set off on loop 26 which was to be Martin’s last as he’d had enough  He came in with around five minutes to spare.  104 miles done.  Only five runners started loop 27. 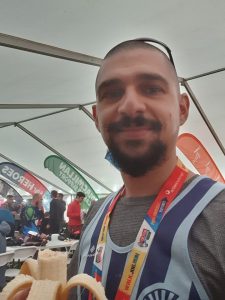 The Jurassic Coast was the latest challenge for ADRIAN BUSOLINI.  He says, “Most of the 2.6 kilometres ascent was in the first half of the race, with long stretches of tiresome shingle beach to follow.  The views over the imposing chalky Jurassic coastline more than made up for the pummelling inflicted upon our glutes and quads (not forgetting the unforgiving headwind), and the race organisation was mightily impressive – well stocked aid stations and faultless navigational markers throughout.  Kudos to the incredible Suzanne Snook, first female/second overall running the two-day version of the challenge, who accompanied me part of the way – and ensured my pace didn’t falter over the hilliest section! I finished in 14:44:35, at 34th, just avoiding the need for a headtorch.”

Back in the USA

It was back in 2007 that ROGER BIGGS became the first Brit to run a marathon in every State of America & DC.  Twelve years on, Roger is looking to go round again.

Based on Bear Lake, in the NE corner of Utah, the warm weather and an elevation above 6000 feet meant it was not going to be an easy couple of days.

Roger had already run two marathons in Utah, so just completed the Idaho & Wyoming events.  Second time around these were states 29 and 30.  Roger ran the two marathon in 6:17:25 and 7:51:14

21 Spartans donned their running shoes on Saturday for Parkruns (PR) at 13 separate locations.

Furthest travelled was David SCOTT who went the 4,690 miles to Richmond, Vancover. Canada. Taking a SB (Season Best) time of 23:33, he finished 17th fastest male in a field of 87 runners.

Interesting fact: the cumulative number of PR appearance for these 21 Spartans totals an impressive 1208 appearances.

DAVID SCOTT ran the Richmond Olympic parkrun, just outside of Vancouver Canada on Saturday morning. Despite the green space in Vancouver itself, the nearest parkrun is 30 minutes away on the train. It wasn’t long before he spotted other English parkrun tourists and followed them to the start!

It’s an out and back course, the second time they are using it after changing from the previous multiple loop route. As it’s a straight line down a river path, this means they only need one Marshall (although he is 2.5K away from the start!) as you’d expect, it was the familiar parkrun fare, other than being instructed to keep right rather than left.

A fairly flat course, although the wind is against you on the way back, and David says he was more than happy with a 23:33 finish, in position 22. The smaller scale made the start far easier; no getting stuck by the bollards here!

All 74 Spartans at the Harlow MWRRL fixture: