Apart from the mud, hills and rain Fairlands Valley Spartans had a great evening at the third Mid Week League race which was in Watford.

67 Spartans ran meaning that 116 different club members have participated in the MWL so far this year – it’s looking good to see 100 plus out for the fourth fixture in Stevenage on the 26th June.  The hills of the Watford course made it difficult for improvements but that still did not stop six Spartans running a new 10K personal best.

ANDREW PATTERSON was fourth man in the race with 36 minutes 31 seconds and ASHLEY KING fourth woman with 43:08.  While the next man was tenth, SIMON JACKSON in 37:13 MICHELLE REEVES was fifth woman in 43:26 and GAIL MACKIE seventh in 44:18.

The fourth and final counting race will be in Stevenage on Wednesday evening 26th June and it will be on tarmac!  The Spartans have a target of 100 club members running.

(All 67 Spartan results can be found near the end of this release).

Spartan REECE McCULLAGH is running from John O’Groats to Lands End.  At the end of Day 22 Reece was currently resting in the town of Hereford after a 26 mile run.  In total Reece has run approximately 650 miles, averaging 30 miles every single day, all of it totally unsupported, carrying all the kit he needs.  By the time Reece reaches Lands End he would have run 1000 plus miles on this epic journey. 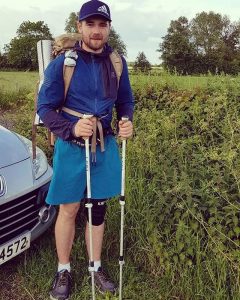 Social media interest on Reece’s challenge continues to increase as Reece goes deeper into the challenge.  This weekend TV Celebrity and Fitness guru Nell McAndrew tweeted her best wishes to Reece and one lovely lady from Shropshire who read of Reece’s challenge on Social media linked up with Reece to keep him company for some mileage on Saturday afternoon – wonderful to see people coming out to support.

Reece expects to cross the River Severn and enter the Bristol area by Monday, after that it’s the West Country – Devon, Cornwall and then eventually reaching the end of the land!

Round the Garden 5K 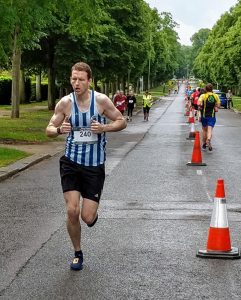 Twelve Spartans competed in the Round the Garden 5K at Letchworth on Sunday.  DAN McALPINE was third overall in 17 minutes 15 seconds.  TANYA BRAZIER ran an impressive 20:52 to be second woman 35 plus while SUSAN McANERY achieved a new personal best (PB) of 23:48.  CAROLE SHELDRICK improved on last year’s time with 24:35, came third woman 45 plus and then ran the one mile event in 7 minutes 39 seconds.

Carole said, “This was my second year running this race and once again. I totally enjoyed it, managing to better last year’s time for the 5K (This year I completed it in 24.35.  Last year I ran 25.50 ).  This year I decided to also enter the 1 Mile Race ( running it in 07.39 ) this started shortly after the 5K.

The support out on the course was fantastic and the whole event was organised very well. 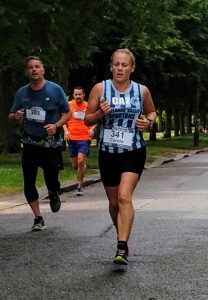 But the best part of the day was having my son Ben join me to compete in his first ever race, running his fastest 5k time of 27:57.”

LEE PIROTH said, “For some reason I really struggled with the 5K.  My legs felt like lead weights but somehow I still managed to get a 5K PB  of time was 27:02.  MONICA SMITHSON finished in 27:16 and ROGER BIGGS in 34:11.

CIERAN McANERY was fifth in the mile with 5 minutes 12 seconds. 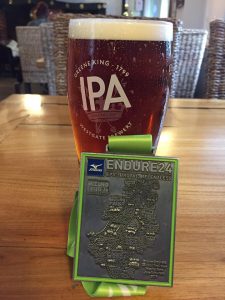 TIM ROBINSON was part of a team of four in the Endure 24 relay race at Wasing Park in Reading.  Each runner in a team took it in turn to run a cross country lap of approximately five miles, running continuously from midday Saturday to Sunday.  Tim ran five laps in 43:40, 45:58, 50:40, 58:00, and 59:36.  The team came 33rd in the small male team category. Conditions underfoot were hard going following the rain during the week and frequent heavy downpours throughout the day and night.

ERICA GRAYSON was in another Endure 24 team.  She said, “What an experience!  Camping, wind, rain, sleep deprivation as well as night running, dawn running and making new running friends.

I did three of the 5 mile loops which were not easy by any stretch of the imagination. Part of the course was changed due to the amount of rain.  Will I do it again? …. in a heart beat. Planning next year’s.”

Hazel said, “I’m very proud of Neal and Jenny who smashed the miles out!”

There was a new PB for Ed HARE at Stevenage finishing at 23:38.

The highest position finisher was Dean CARPENTER at Aldenham in 19:31, finishing as 3rd man.

Rebecca Barrow completed her first Parkrun at Stevenage in 32:47.

On the Wimpole Estate course, Steven DOBNER ran his 70th event in 30:58.