A Spartan world record!  Running the Stockholm Marathon YUKO GORDON’s 3 hours 21 minutes 7 seconds was a single age world record for marathon for women aged 68 years old.  The previous record was 3:23:05 set by Caroline Horder in the Manchester Marathon in April this year.

The Stockholm Marathon is one of qualifying races for the inaugural Age Group Marathon World Championship which will be incorporated into the London Marathon next year.  Those with a Top 10 ranking in the world of each age group (every 5 years over 40) will be invited.  Maximum score to qualify will be 8000 points from 2 events (i.e. 2 wins) with a target time, for Yuko’s category (65-69) of 3 hours 48 minutes.

Yuko already has 7950 points already from her London second place but she says she is going to have to run Berlin to make sure.  She has the fastest time in her age group ranking at the moment but it may not be enough unless she has the maximum 8000 points to be top 10.  Other qualifying events include London, Berlin, New York, Boston, Chicago and Tokyo.  You have to achieve the qualifying scores by the end of September.

Yuko ran for the England Team last weekend in the England and Celtic Masters 10K in Birmingham and has just been awarded second in top age graded performance of 98.23% close behind to Scotland’s Fiona Matheson’s 98.92%.  Many veteran runners would be happy with 70%!

MELANIE BUTT ran her first 10K race on Sunday.  It was in Worthing and incredibly hot, but at least you can have a paddle at the finish!  Mel says her time was 65.28, but she’s pleased to have broken her duck.

Sunday saw the inaugural Great Hertfordshire AONB Marathon / Half Marathon / 10K which started and finished in Offley.  The very hilly off road course made it a testing event for the fourteen Spartans who took part in one of the three distances. 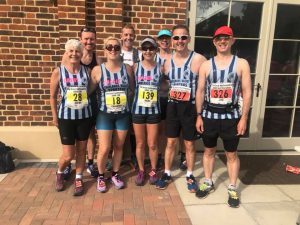 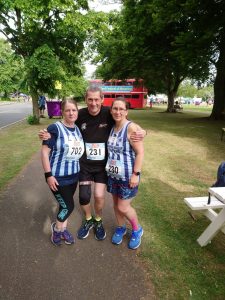 Sadly Karen Broom did not complete the race due to injury.

Sally reported the race was run on a lovely course with just the one hill at around the half-way mark catching the runners by surprise on a warm day.

The atmosphere and support from marshals and locals was great, and there was the added bonus of an international kite festival and car show to look around after completing the race.

Spartan JONATHAN PARR was in Luxembourg for a half marathon which he finished in 1 hour 28 minutes 22 seconds.

It was dry and sunny with a medium breeze in Hyde Park for the Last Friday of the Month 5K race round the Serpentine.  JIM BROWN finished in 25:59.

A total of 34 Spartans participated in Saturday’s Parkrun across 13 locations.

The fastest Spartans overall this week were Susan McANENY (24:23) in her first appearance at Ellenbrook and Dean CARPENTER (19:23) achieving a PB (Personal Best) running at Stevenage, finishing in 6th place.

Further PB’s were achieved by Sarah KENDALL (27:05) in her second Parkrun at Stevenage and Steven DOBNER (23:07) running at Ellenbrook.