85 Spartans including 36 women raced their socks off at the first Mid Week League race of the 2019 season. 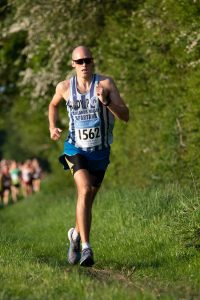 Over 6.2 miles some of it off road ANDREW PATTERSON was fourth in the race in 35 minutes 52 seconds and JONATHAN PARR sixth in 36:01.  MICHELLE REEVES was fourth woman in 42:09 and SUZY HAWKINS fifth in 42:47, Suzy was also third woman 35 plus.

MARK GOODWIN was third man 60 plus in 46:08 and YUKO GORDON won the women 65 plus category with 46 minutes 18 seconds.  Yuko was third counter in the Spartan women’s “A” team.

Then there were dozens and dozens of other Spartans including many being encouraged round their first race.

The FVS women finished third just ten points behind second place Bishops Stortford (196 to 186) and the men fourth, again only just Bishop Stortford (498 to 458), so all to run for in the remaining three races. 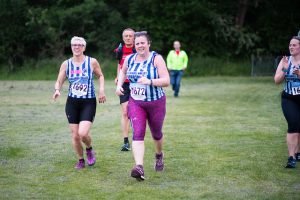 The next race will be on Wednesday 5th June.

(All 85 Spartan times can be found near the end of this release).

Stuart Haycroft ran the Edinburgh marathon, breaking the three hours barrier for the first time in a time of 2 hours 58 minutes 17 seconds (2:58:17). 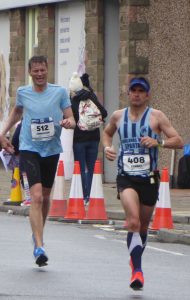 The race organisers sent out emails with severe weather warnings late last week, which turned out to be a very wet start, and a very windy route.

Stuart said he enjoyed the tail wind along the coastal part heading towards Gosford House, then on the turn back the strong wind killed any sort of pace.

Edinburgh is a lovely race, and Stuart was sad he missed the Spartan trip here last year. Maybe next year 🙂

DAVID HARRIS ran the Edinburgh half marathon of 1 hour 28 minutes 32 seconds and HELEN WHITEHURST came in with 2 hours 21 minutes exactly.

There were personal bests for KAREN ELLIS and JULIE SHADBOLT at the Liverpool Rock “n” Roll Marathon.  Karen improved her time by 12 minutes to 4:17:48 and Julie by 11 minutes to 4:50:34. 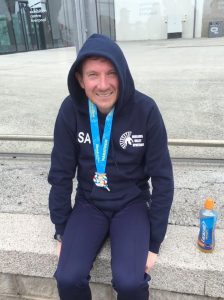 ERICA GRAYSON said that within a week she had raced on the party isle of Ibiza and in the rock and roll city of Liverpool.  On Saturday morning she ran the 5K in a year’s best 26:26 and then Sunday’s half marathon on 2:07:10.  She enjoyed warm and beautiful sunshine on Saturday but Sunday was wet and windy.  Erica added the medals were amazing.

The seven Spartans in the Liverpool Marathon were:

The eight Spartans in the Liverpool Half Marathon were:

The nine Spartans in the Liverpool 5K were: 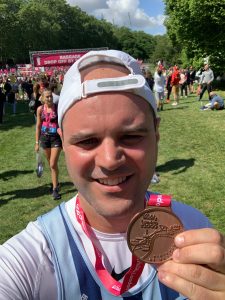 And if all that activity wasn’t enough fourteen Spartans ran the Vitality 10K in Green Park, London.

The fastest female from Fairlands Valley Spartan was NICOLA PATTMAN in 1:02:00.

ADRIAN BUSOLINI ran the Copenhagen Marathon in 3 hours 17 minutes 18 seconds.  He just inched a PB (personal best) by a couple of minutes.  Most of the city seemed to be out supporting along the route on what was a glorious sunny day.

The Hatfield Broad Oak 10K is a great village race with a highly civilised start time of 11a.m.  The Big “O” Broad Oak road race has been held on the late May Bank Holiday Monday for 34 years.  With a limit of 1,500 runners it was not too crowded.

Another Win For Yuko

The England Masters 10K Age Group Championship was at Birmingham over the weekend.  Spartan YUKO GORDON won the women 65 plus (W65) category in 44:22 over the tough undulating course. 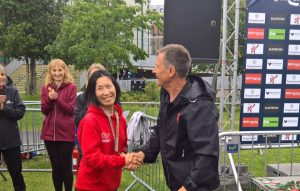 She said, “Wednesday’s hilly Mid Week League race sharpened up my recent staleness and I felt my old self again today.  I didn’t look my watch and ran to my feeling this morning to avoid my mistake in the London Marathon.  It could have been a bit of over pace earlier but I did not want to pay for it.  I had to watch and hold off two ladies in my age group, so the last two kilometres was tough but I thoroughly enjoyed being challenged!  They said they gonna catch me next time, I’m so excited to hear it.”

Forty Fairlands Valley Spartans headed out to run at Parkrun events on Saturday May 25th. Finishing fourth overall, MARTIN BLACKBURN achieved a PB run at the Stevenage event in 18 mins and 47 seconds. He was joined by MELANIE BUTT who got a PB of 31 mins and 10 secs and ASHLEY SCHOENWETTER who was the first woman to finish in 20 mins and 28 secs.  Further afield PB times were recorded for RICHARD COWLISHAW at the Dishley run in a time of 20 mins and 42 secs and ANDY JAY at Teighnmouth Promenade in 23 mins and 35 secs. On the Ellenbrook Fields course, FIONA CLARK ran her 70th event in 26 mins and 12 secs.

The Bank Holiday weekend saw many Spartans heading out to new events. DANIEL GREEN ran at Dunstable Downs in 28 mins and 09 secs; MARIA THORNE finished the Panshanger event in 30 mins and 47 secs; SALLY PHILLIPS completed the Swaffham course in 30 mins and 58 secs; TRACEY STILES the Holkham run in 31 mins and 15 secs; KAREN PALMER and CAROLINE CROFT took part at the Princes event in Liverpool in times 31 mins and 15 secs and 31 mins and 16 secs, respectively; and, DARRYL STEVENS finished in Hereford in 33 mins and 59 secs. 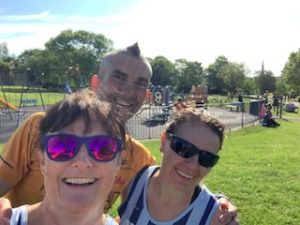 Caroline Croft and Karen Palmer ran Princes Park parkrun in Liverpool.  On their way into the park they stopped a fellow runner to ask directions and they met Terry Forrest who revealed he was running parkrun then dashing down to complete the rock and roll 5K event.  On Sunday he planned to run the 1 mile event, half and full marathon.  Quite amazing.

(Note: Male and female positions are separated in column one which is why, for example, 171 appears to come before 119).