Fairlands Valley Spartans MARTIN BLACKBURN and TANYA BRAZIER were second and third in their age groups at the Hitchin 10K on Sunday morning.  They were joined by fifteen other Spartans.

DUNCAN FLOUNDERS finished the Hitchin 10K in 43m 03s.  He said it was not the easiest of courses with a tough hill at kilometre 4 which tested the legs, but well marshalled and a good finish in the town centre. 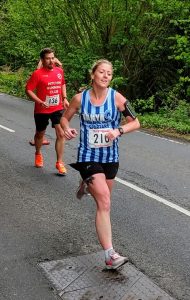 ERICA GRAYSON said it was a thoroughly enjoyable race.  She was very happy with 53:34, a year’s best and is chasing down that personal best (PB).

On his first long run back from injury DAVID HARRIS-CHERGUIT finished in 59 minutes 56 seconds.  Next Sunday he’s due to run the Edinburgh Half Marathon.

Another Spartan enjoying the Hitchin 10K was DZENANA TOPIC who finished in 1:06:33.  She said, “The weather was perfect for running and the scenery was beautiful.  My result wasn’t amazing, but I had lots of fun.”

Ciaran McAneny won both days of the Dobbs Weir Double Marathon in Ware; run on a mix of trails road and canal paths; with times of 3:37:17 (Saturday) and 3:39:55 (Sunday)

On Sunday TREVOR and KAREN BROOM ran the Colchester Stampede 10K.  Karen said, “It was a nice but hilly one loop route starting in Colchester Zoo by the elephants round passed the giraffes then out of the zoo round the villages and the back in the zoo back passed the elephants and finishing in front of the zoo.”

Race one in the 2019 Mid Week League series is in Harpenden this Wednesday evening 22nd May and Fairlands Valley Spartans will be sending dozens of runners.  Each race in the series will be about 10 kilometres.

GRANT RAMSAY was at the Southern League Track and Field Match in Watford.  In the 3000 metres steeplechase he finished in fifth place in a time of 11:57.

Despite starting the race completely fresh, fatigue crept in quickly through those energy sapping barriers.  Ramsay had to work hard and was happy to get in under 12 minutes.

Saturday saw 48 Spartans taking on Parkrun in 11 separate locations around the country.  Seven Parkrun PB’s (Personal Best) and 11 SB’s (Season Best) times were achieved.  The fastest lady and man were at Stevenage, Holly HODGSKINSON (21:56) and Stuart ARCHER (18:27).  Congratulations to Paul JENNINGS (31:35) running his 50th Parkrun at Stevenage.  Interesting fact; the eleven locations, attended by Spartans, had a combined attendance of 4,175 runners. Largest event attended by a Spartan was Cassiobury (617 entrants) and smallest was Letchworth (149 entrants).

Spartans at the Hitchin 10K