GAIL MACKIE was 40th overall out of the 296 finishers and WON the female open race with 1 hour 41 minutes 17 seconds.

JENNY MALEKPOUR ran her first ever sub two hours half marathon with 1 hour 54 minutes 21 seconds and was THIRD open woman.

ROS INGRAM was the club’s third woman under two hours with her 1:57:50.

PAUL JENNINGS ran a new personal best (PB) of 2 hours 3 minutes 53 seconds on a course he didn’t think he’d get anywhere near to a PB with the hills!  It was an improvement of nearly five minutes.

WENDY THARANI said the Greenway Challenge was well organised and beautifully marshalled with stacks of enthusiasm.  She was really happy and appreciated that the race director allowed her to run even though she was late!  Her official time was 2 hours 14 minutes 37 seconds.

DAVID SCOTT said it was my first half marathon distance event since October and first time running anywhere near that distance at race pace since then.  He finished in 2:05:34.  David said, “TIM ROBINSON kept me company and provided support all the way round, and helped keep me going when I wanted to slow it right back. Thanks Tim!” 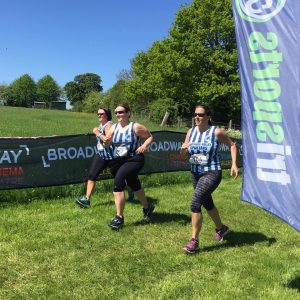 JIM BROWN said, “It turned into a great morning and the trail half marathon course was fantastic provided you were relaxed about losing a bit of time at some pinch points and road crossings.  I was not in good form but enjoyed chatting with several other runners on the way round and still, somehow, managed to win my age category.

It was a fun morning for SOPHIE COWAN, HAYLEY YENDELL and SUE HAMER who had a social run round together and came in with 2 hours 28 minutes 51 seconds.  It was a great run by Sue so soon after the London Marathon.

(All sixteen Spartan times can be found near the end of this release). 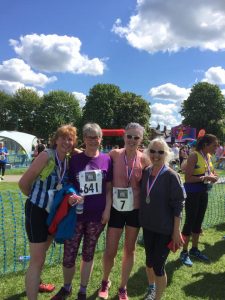 JANE WHITROW said there was a beautiful route for Sunday’s Wheathamptead 10K.  She finished in 1 hour 11 minutes 25 seconds.

Roger Biggs survived a hail storm at the Eastbourne Trackstar Marathon on Saturday.

Despite the course being flat, and a nice even surface, Roger struggled to overcome the weather and finished in 5:54:52.

Despite some unpleasant weather 31 Spartans recorded some excellent times in the club’s Handicap 5K event on Thursday evening.

Winner was new member Nikki Lufkin, smashing her handicap by 7½ minutes to finish in 29:32, over 3 minutes ahead of the next runner.  Winning man, second overall, improving his 5K year’s best (YB) achieved on the track at Ridlins on Monday by another 15 seconds to 22:08 was Chris Holland, followed by newcomer Malcolm MacGregor beating his handicap by 1½ minutes to 33:43, with Jennifer Malekpour second lady in 4th position overall in a new personal best (PB) time of 23:55, 1:57 quicker than her previous PB.  Third man in a new PB of his own was Matthew Newton in 22:05 with Alison Wood third lady in her first 5k of 2019 in a time of 21:40.

There were also PBs for Debbie Blantern +0:29 to 28:03, Nick Kleanthous +0:02 to 25:58 and newcomer Sarah Salter despite not managing to stay on the correct course and having to run further than intended!

28 of the 31 finishers were within 2 minutes of their adjusted handicap time set and total time difference between 2nd-30th position was 4:32.

The next Handicap 5k is scheduled for three weeks time on Thursday evening 30th May.

Don’t forget that runners don’t all start at the same time in handicap races.

(All 31 times can be found near the end of this release).

More Than A Marathon

TIM SABAN ran the River Arun Marathon on Saturday.  He felt it was more of an ultra with feed stations and pretty much self guided except for the two marshals out on the course, as well as being a mile too far.  There was an out and back route which started at Littlehampton Marina and followed most of the river Arun, until it met the South Downs Way. At which point we had to run, (sorry walk) up a steep hill.  A 600ft rise over two miles. Even walking was a challenge.  Tim said, “Running back down once we’d reach the half way checkpoint was tricky enough.  Once we reached the bottom it was just a case of retracing the route back.  Fully loaded with all my ultra kit on my back just to see how that felt.  We endured wind, heavy rain then glorious sunshine just as I finished.  A good training day and a few lessons learnt.”  He finished in 4 hours 9 minutes.

Recently Fairlands Valley Spartans women came first and the club’s men third in an EMAC evening track and field fixture at Sandy.  EMAC is the East of England organisation for veteran athletes. 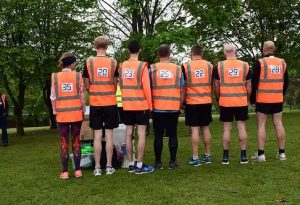 In Stevenage many Spartans volunteered at the pacer event.  Jonathan Parr was 2nd overall in a new PB of 17:07.  Others PBs in Stevenage were Paul Shelley (19:31), Toby Eccleshall (20:56), Alison Shelley (25:34), Karl Shreeve (26:30) and Debbie Blantern (28:09).  Congratulations go to Jonathan Jones completing his 50th parkrun at Stevenage.  Jim Brown won his age category.

Spartan Results From The Greenway Challenge

A total of 92 runners took part.