The Baldock Beast was howling but after two weeks of race cancellations caused by Storms Ciara and Dennis it was great that events took place at the weekend.

23 Fairlands Valley Spartans, 12 women and 11 men lined up for what looked like it would be a character building event. 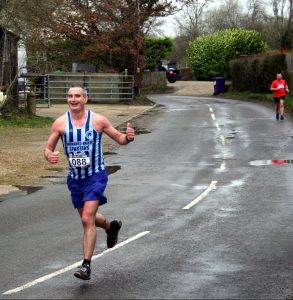 Probably the best Spartan performance was by NATALIE WHITE who fought the wind to finish fourth senior woman in 1 hour 49 minutes 2 seconds.  There were only two Spartans in front of her – RICHARD COWLISHAW 69th of the 379 finishers in 1:43:46 and ELLIOTT WHITE 114th and given the same time as Natalie but separated by the electronic timing.

SAM SIMMONS was all smiles at the end.  Before seeing the conditions he had hoped to beat 1:50 but wasn’t giving up and came in with 1:51:23.  TIM ROBINSON tried a constant effort approach all the way round but said the on average downhill last three miles were slower than going uphill with the wind making it impossible to maintain any speed.  1:55:25.

Maria THORNE and KAREN ELLIS ran the Baldock Beast together raising money for the British Heart Foundation.  They said it was a wet windy run today with great support from marshals.  Karen and Maria finished together in 2 hours 30 minutes.

JIM BROWN said he was watching the trees bouncing around as he left home and wondered if this was going to be a third Sunday event cancelled in a row.  Actually no here was a good turnout of Spartans and hundreds of others registering at the Templars Hotel.  As we made our way to the start it wasn’t that cold, it was dry at that stage but it was obvious the wind was going to make the last six miles hard.  The range of clothing on the start line was extreme.  Almost artic expedition to shorts and club vest.  Feeling brave I went for the latter.

The Baldock Beast is described as multi-terrain but most of it, maybe twelve miles, is on roads and other surfaces where you can run normally so road shoes are needed.  Some years the two off road sections are easy enough but with the recent weather much of “Park Lane” was liquid mud.

Coming out of the Park Lane mud, and approaching the seven mile marker, the rain started and, wow, developed into a headwind storm with runners being stung , visibility dropping and body temperatures crashing.  All the way through Sandon and Roe Green it was a fight to keep going with thoughts of if this keeps up for the next five miles a lot of people, including maybe me, are going to be in trouble.  Then, crossing the River Beane, it was sunshine and I started to dry out and warm up.  It was great crossing the last bridge, over the bypass, and looking down to the finish line but there was no energy left to accelerate for the last two hundred metres.  Pleased enough to get round in less than two hours with 1:55:53.

There were 379 finishers including 127 women.  All the Spartan times can be found near the end of this release.

YUKO GORDON celebrated her birthday at the Stamford 30K which had been postponed for a week by Storm Dennis and she celebrated in style by winning the women 65 plus in 2 hours 20 minutes 14 seconds which was 10 minutes faster than the W55 and W60 winners and improved her own age course record by five minutes which was set two years ago.  The race was on a beautiful course but very hilly and with a gusty wind on Sunday.  Overall she was 13th out of 236 women

Spartans ED HARE and TIM SABAN ran the Seville Marathon on Sunday.  They said it was an amazing event and a great course which was super flat.

They started in comfortable 8 degree conditions but it quickly rose to 27 which for the two Brits, in February was a bit of a shock.  Although it was tough at times they both finished, Tim is 3 hours 22 minutes and Ed in 4:26

While other Spartans were suffering the wind and rain Nessa Rolfe, from NHRR, and Spartan CATHY CRAIG got a flight to Naples for the half marathon.  It was perfect running weather and a nice route along the coast apart from a tunnel which they had to go through twice – it was half a mile long and dark – like a sauna on the way out and uphill on the way back.  Cathy made it in 2 hours 17 minutes and Nessa in 2:23.

Spartan JOHN HARRIS won two GOLDs at the Eastern of England Masters indoor championships which were at Lee Valley.

Fifty five Spartans headed out, on yet another rainy and windy Saturday morning, to run at 9 different Parkrun venues.

Claire PULLEN was the first lady at Stevenage with a time of 24:11.

There were no official Parkrun milestones this week but several Spartans reached unofficial milestones including Jo Bowdery (30th), David SCOTT (120th) and Karen PALMER (90th).  Well done and congratulations to all.

Fairlands Valley Spartans presentation evening, dinner and dance will be at the Cromwell Hotel, Old Stevenage on Friday 28th February.  An amazing 105 members and friends will be there.

The 23 Spartans who beat the Baldock Howling Beast