Fairlands Valley Spartans were running at the Big Half in London; the hilly Berkhamsted Half Marathon; the Regents 10K; Caythorpe Dash; the Hannington Hike and in Hyde Park but the big club news of the weekend was the presentation evening, dinner and dance which was held in Old Stevenage on Friday evening and attended by 105 Spartans, family and friends.

Club chair SOPHIE COWAN thanked everyone who came along to celebrate everything you and the club had achieved in 2019.  70% is a good standard for any Spartan top aspire to but male champion GRANT RAMSAY achieved 79.9% in the short contest and 76% in the long while female champion YUKO GORDON scored an outstanding 98.2% and 97.7%.  So Yuko is the club’s new overall champion.

Altogether the winners in the FVS club championships were:

Female Age-Graded Short (age graded calculator is used to calculate the age graded performance –this data can then be used to compare the performances of athletes of different ages).  1st Yuko Gordon 98.2%; 2nd Alison Wood 87%; and 3rd Suzy Hawkins 77.9%. 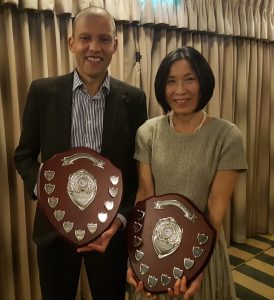 Overall champion for men was Grant Ramsay and for women Yuko Gordon.  Taking the results across the long and short distance championships YUKO GORDON was declared the club’s overall champion.

There was a MASSIVE thank you to Paul Holgate who collects all the race data throughout the year and then crunches the figures to calculate the winners – a mammoth task.

Claire Emmerson, women’s captain and Mark Freeman, men’s captain presented the Captain’s Awards which went to Ken Jude (men) and Yuko Gordon (women).  The awards recognised support in mid week and cross country league races.  Mark said the Spartans were back in the top division of the summer Mid Week Road Race League and he was determined that the club should stay there in 2020.

The Head Coach’s Award went to Verity Sutton Fisher; the President’s Award to Tessa and Dave Stephenson; and the Chair’s Award to Ken Jude

Spartan of the Year – Dead Heat

The joint winners of SOTY 2019 were Mark Freeman and Simon Jackson.

Some of the supporting statements for Simon Jackson were:

“He’s been so welcoming to me since I joined the club and I know everyone benefits from his encouragement week after week; been a great Vice Captain and encourages everybody to get involved; cut him in half and you’ll have a FVS on his Heart!; helped me so much last year through all my training. Legend!; he is the loudest and most enthusiastic supporter at club races, whether that’s whilst out on the course when racing, once he has finished the race he is always on the course cheering in our runners or if he is volunteering to help, he will marshal and be the loudest and most enthusiastic marshal.”

And for Mark Freeman:

“His commitment to the club is immense and turning up for every cross country or mid week league race (even though he doesn’t race), chatting to people before, even offering to look after dogs and kids and then being there at the end to take the last person’s name down for the results.  Whatever the weather he is always there whether cold in the winter XC or in the rain at Harlow in the summer; he is an excellent team captain and always encourages runners especially at the track; Mark has been incredibly welcoming to me since I joined the club last year.”

Big Half in London 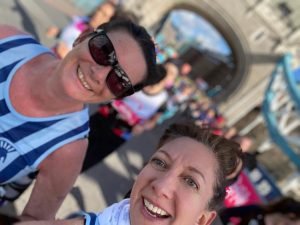 ALISON and PAUL SHELLEY ran the Vitality Big Half in London on Sunday with thirteen other Spartans, in chilly, slightly windy but beautiful weather, amazing sunshine so welcome after all the storms and rain.  Alison ran in 1:58:07, a personal best (PB by 1 minute 7 seconds and 9:51 faster than last year’s race).  She didn’t set out to run to a target with training having not gone to plan and also carrying a back problem … and took pictures en route including the one with Erica running over the iconic Tower Bridge in the sunshine!!  Paul ran it in 1:28:01 which was a PB by 3min 25 and 4.07 faster than last year’s race.  He was so pleased with his first ever sub 1:30.  They said it was a brilliant event except they need to sort out baggage collect – seems you were either very lucky or had a disaster going to and collecting your bag !!! We were lucky ones!! 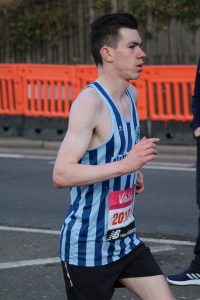 MARTIN BLACKBURN was the fastest Spartan, only just outside the first thousand with 1 hour 27 minutes 39 seconds.  LEE PICKERSGILL finished in 1:54:18.

What an amazing day said ERICA GRAYSON who finished in 2:02:39.  Not bad for someone who says she is slowly getting there.

SAM SIMMONS has been aiming to beat 1 hour 50 minutes for a while and was rewarded with a massive PB of 1:44:02

(You can find all 15 Spartan times near the end of this release).

Other Spartans hit the hills at the Berkhamsted Half Marathon.  It was pretty tough up to nine miles and then a headwind through Ashridge.

DANNY SCANLON finished five minutes faster than in the Watford Half a month ago with 1 hour 39 minutes 30 seconds.

Another Spartan having a good race was JOHN ROXBURGH with 1:44:13.

Spartan JIM BROWN was having a bad day in the running office.  He had to walk twice in the first 5 kilometres and finally got back to sub two pace at ten miles to finish in 1:56:23.  Jim was second male 60 plus.

New club champion YUKO GORDON said she hadn’t run a 10K race in ages.  She said she went out too fast and struggled almost the whole distance as a consequence.  However she finished in 45 minutes 29 seconds and won her category by seven minutes.

Yuko reckons it was a good reminder before the big race in Cambridge next weekend!

After surviving the ravages of the Baldock Beast last weekend, Tricia Hopper and Karen Liddle travelled to the village of Caythorpe in Lincolnshire to take part in the Caythorpe Dash, an off road half marathon.

Conditions were as windy as last weekend but the sun shone for the duration of the race.  The going was generally very muddy and was boggy in places but the pair got round the course in 2:23:33, coming 30th and 31st overall.    Karen came in first in her age group and Tricia sixth in hers.

The race is a friendly, low key event and was chip timed for the first time this year.  Would recommend it for anyone who enjoys running off road in some beautiful countryside

Hazel Smith it was a tough day at the Hannington Hike on Sunday, wading through boggy mud for 27 miles.  The run became more of a squelchy slippery walk.

Karen Ellis was joined on her first ultra by Julie Shadbolt, Calantha Chapman, Cathy Craig and Hazel Smith to finish in 9 hours 25 minutes.

It was wet, windy and cold in Hyde Park for the Last Friday of the Month 5K at lunch time.  JIM BROWN finished in a year’s best 5K time of 25 minutes 25 seconds.

Vishal Shah won the prize for furthest flung parkrun this week.  He ran in Parkville, Melbourne, Australia.  It was his 10th parkrun in 26:20.

Paul Maguire was at Woodhouse Moor in Leeds (28:57) and John Roxburgh clocked his first run at Bedfont Lakes near Heathrow (22:49).  Daryl Stevens was at Salcey Forest near Northampton (48:16).

Spartans at the Big Half