Storms Ciara and Dennis are history and it was a great morning for 32 Spartans at the Cambridge Half Marathon.  Many came home with new personal bests (PB).

The club’s fastest woman was SAM PRETTY with 1 hour 26 minutes 11 seconds and 56 seconds off her personal best. 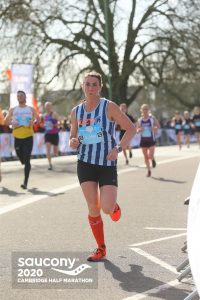 Only just behind her SUZY HAWKINS (right) was very happy to set a new half marathon PB in Cambridge 1:26:25.  She said she didn’t think it was possible to better her December time, so the 40 or so seconds really do count.  Suzy was 21st woman, and third in her age group out of 4,859 females on international woman’s day.  As a bonus Suzy scored an age graded score of 80% for the first time, that’s been a target for a while.  She said the course was really nice through the colleges, although it was still windy out there.

There was another PB from DAVID PATTMAN who ran the Cambridge Half in 1:43:52.

ED HARE said, “It was a great morning with loads of Stripes amongst the 10,000 or so Runners.  After the Seville Marathon two weeks ago and The Big Half last week I was eyeing up this race up for a strong run but was concerned about tiring legs.  After starting well with Steve Dobner, David Pattman and Matt Clarke and absorbing all the support from the crowd, with lots of Spartan high fives around the technical sections in the centre, I pushed on from five miles. After 10 miles I knew I had a big PB on the cards and I was delighted to finish in 1hr 43mins 23secs and well over a 3 minutes PB and a 7 minute improvement from the same race last year.  The route has a bit of everything and the support around the course was fantastic and this race is one of the first in my diary.  I already can’t wait for next year. With so many good results today there were loads of happy faces after an exhilarating mornings running, a great all round Spartan performance from everyone.”

Lovely morning in Cambridge with a large number of Spartans in attendance.

The weather was lovely and for the first time this year STEVE DOBNER was splashing water on his wrists and head.  He finished in 1:52:33 a couple of minutes off his PB.  He thoroughly recommends the race to anyone who hasn’t run it

FIONA CLARKE said, “Considering that we have had a lot of rain lately, the weather conditions were perfect for the Cambridge Half.  The sun was shining but the temperature was just right.

My race went perfectly, just like the weather. I went in without any expectations and ran with how I felt.  I completed the race in 1:54:02, which is a PB, an improvement of 3 minutes 45 seconds.  I am chuffed to bits.  I can’t say thank you enough to all the Spartans who have encouraged me and supported me so far.

The event was well organised and well supported throughout despite some confusion pre race with start/wave times and travel options.  However I definitely recommend this race to everyone.” 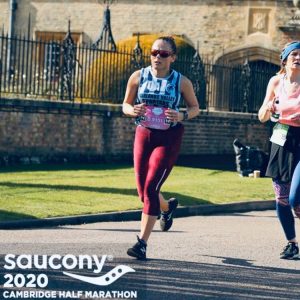 “I ran my third Cambridge Half and wow what a perfect day for it” said CAROLE SHELDRICK (left). I really enjoyed the new course.  It was truly amazing getting to see the super speedy Spartans coming back the other way, heading towards the finish with only a few miles left.  This was a very well organised event with amazing support out on the course.  I wasn’t sure how my run would go today as I’ve been focusing on distance/comfortable pacing for the Virgin London Marathon but this race allowed me to see that my training is clearly going well as I managed a very comfortable PB of 1:54:48 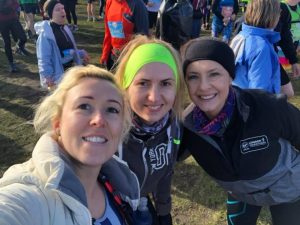 HAZEL SMITH ran with Ada at Cambridge on her first half marathon.  We both completed in 2:07:55, a fantastic time for Ada’s first ever 13.1!!

(Times for all 32 Spartans can be found in a table near the end of this release).

Thanks to pic2go.co.uk for permission to use some of their photos above.

Postponed from 16th February by Storm Dennis the Hertfordshire Cross Country Championships for Veterans went ahead at Stanborough on Sunday.  The three week delay didn’t bother Spartan ALISON WOOD (header photo) who won County GOLD for women 45 plus and was third female overall in 36 minutes 36 seconds in the 8K race.

Grant Ramsay completed the Hillingdon 20 mile race in 2 hours 19 minutes 31 seconds.  The uneven surface which mainly involved running on pavements triggered sciatic nerve issues, resulting in reduced movement in the right hamstring.  This contributed to Ramsay’s disappointing performance.   However he said it was still good to make it round in sub seven minutes miling.

With the Paris Marathon (5th April) cancelled SAM SIMMONS said he was absolutely gutted.  At 3pm on Friday he decided he’d enter the Thames Meander Marathon with no taper or rest week.  He badly wanted the elusive sub four in Paris and realise it may be a tough one for this one as in preparation.  Sam started so well but fell short with 4:03.56 which in hindsight I should be very happy with.  The course was brutal trails 13 miles out and back along a tow path with burst river that he had to wade through with waist high water and run along walls to miss mud and water. 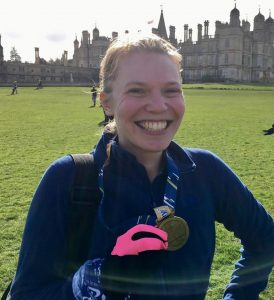 ROB EVANS took part in the inaugural Burghley seven mile race that took place today in an around the Burghley House Estate in Stamford, Peterborough, which is best known for hosting the Burghley Horse Trials each year.

Burghley House is the ancestral home of the Cecil family and the house provided a stunning backdrop to the event.  Weather conditions were perfect and Rob completed the seven mile race in 56:05.

VERITY FISHER also ran the Burghley 7 (7miles) in 57:32. It was a lovely new, road course through undulating grounds of Burghley House and Stamford countryside.  The wind was very strong and there were a few hills but a lovely down hill mile to finish. Would recommend!

In the first Saturday of the month 5K at Letchworth JOHN HARRIS was fifth in very muddy conditions with 20:49.

TAHER THARANI said the Surrey Half was a nice event on quite a nice route.  He thought they should rename it the Posh Half.  The post race nosebag pretty good.  He finished in 2 hours 30 minutes.

Fastest overall Spartan was Jonathan PARR with a PB time (Personal Best) and 1st at Stevenage [16:42].  Fastest female, running her 274th PR and coming in 1st lady in Stevenage was Alexandra Louise WATSON-USHER [21:42].

PB times were recorded for Andrew MCGUINNESS [21:28] at Stevenage and Caren THAIN [37:41] at Gladstone.

Well done to all.

32 Spartans at the Cambridge Half Marathon