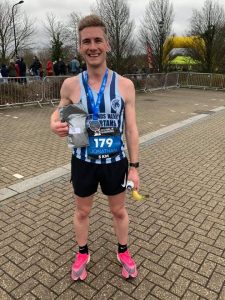 Spartan JONATHAN PARR (right) won the 5K race in the Milton Keynes Festival of Running.  He was first out of the 354 finishers in 16 minutes 35 seconds, 22 seconds ahead of his nearest rival.  He was very pleased with that lovely win.

The festival consisted of four distances – 5K, 10K, half marathon and 20 miles.

In the popular half marathon, with 1,087 finishers, SUSAN MCANENY was first Spartan in 1 hour 51 minutes 2 seconds.  She said, “I was really pleased the MK festival Of running wasn’t cancelled today because it was nice to have something to take my mind off the current state of affairs in the world.  I was happy with my time – a PB by two minutes, a new half time of 1:51:02.  Nice to see Jim there for a cheery Spartan wave too!  P.S – loads of loo roll and hand sanitizer in the portable facilities!! (Editor’s note: edited to replace the commonly used term, which in fact is a trademark, following an objection from the Intellectual Property Manager at Portakabin Ltd) – and no queues.”

Following a DNF (did not finish) in an event last week JIM BROWN was pleased to hang on well enough to trim four seconds off his best for the year with 1:51:53 despite an encounter with an autonomous delivery vehicle.  He was second in his category.

SHARON FLAHERTY ran the 5K in 31:27.  She said, “When I woke up this morning I hadn’t planned to run a race, but Ed put the idea in my head and so I signed up at the very last minute – 20 mins before the race start!  The only running I have been managing to make time for this has been the starters’ group on Mondays (which I love).  I was keen to see how a race would go, plenty of work to do but happy to have got out there and had a go.

Erica said, “What a great event. Gently undulating course with fantastic views.  It was well organised with enthusiastic volunteers.  This was a great spartan day out and highly recommended.”

Callie Chapman, Vicky Archer, Jenny Garrett, Darren EMMERSON and CLAIRE EMMERSON (header photo) all ran Hampton court half marathon today.  It’s a lovely route starting and finishing at Hampton court palace and a large section of the run is by the Thames.

Jenny has run every Hampton court half and has all 6 of the amazing medals.

Times are as follows

Claire paced Vicky in her first half marathon which she smashed; their time was 2:06:37

Darren and Jenny were out for a fun training run and did 2:07:31

Callie also enjoyed the route and finished in 2:34:02.

Does the thought of running for six hours on a 400 metre track grab you? No?

CIARAN MCANENY has no idea why…

Friday morning saw a bunch of around 80 runners line up on the track in Walton-on-Thames to run around in elongated circles for more time than is normal.  Some runners were out to pass half marathon distance, some for marathon and some just to see how far they could go in six hours.  This was Track Wars III.

Some were even starting and continuing through the evening race as well to run up to twelve hours.

Ciaran’s aim was to last the six hours and see how far he could go.  The nature of the event made logistics easy of course.  You could lay out your supplies trackside, stop when you need to refuel, no worry about getting lost, etc.  The only real risk he guesses would be boredom.

Ciaran lined up some tunes to occupy my mind.  However, as there was always company in the track the time never seemed to drag.

The first half went well and paced slightly faster than he’d hoped.  Nutrition was alternating water and PH hydration drinks bottles; plus various bars and moving to gels in the middle section.  His schedule was to eat every 30 minutes and sip on the drinks throughout.  Finally would move to Tailwind if eating became more difficult near the end.

All went pretty much to plan.  The second half was slower due to nipping off track for some nature breaks; but still finished as well as he thought he could.

Ciaran said, “Although the format may seem unappealing, I’d do it again. It was really different to run without thinking, navigating and with everything to hand.  To simply dial into your running and keep moving.”

On Saturday 14th of March, two Spartans took on the challenging Ashridge Boundary Run, a 16.5 mile trail run around the Ashridge estate including stunning views from Ivanhoe beacon and through ancient woodland.  Running through a quagmire of mud for a number of miles plus 1340ft of elevation around the Chiltern Hills, it’s safe to say this is not a course for those chasing a time, just finishing is an achievement!  John Roxborough completed the course in a time of 2:41:07, 156th overall and 58th in his age group.  Thomas Sauka finished in a time of 2:42:36, 164th overall and 61st in his age group from a total of 384 finishers.

In a week of strong results for the female Spartans.  JANE WHITROW celebrated her 100th Parkrun in style with a personal best time of 29 mins and 11 secs at the Bushy event. In Stevenage, YUKO GORDON was the first female to finish in a new PB time of 22 mins and 33 seconds.  She was joined by MO WARRILLOW and BETH FOLEY who also ran PBs of 25 mins and 40 secs and 31 mins and 55 secs, respectively.  GRACE BROWN finished the Ellenbrook Field course as the third female in 22 mins and 51 secs and VERITY FISHER the Dunstable Downs run, as the fourth female, in 27 mins and 44 secs.