There were double figure Spartans at four events over the weekend – the Hatfield Five including county championships; Bass Belle 10; Hertfordshire Half Marathon and the Stevenage Parkrun.

Golds and Bronze at Hatfield Five

24 Spartans brought back two GOLDS and a BRONZE from the County Five Mile championships which were held at Hatfield on Sunday. 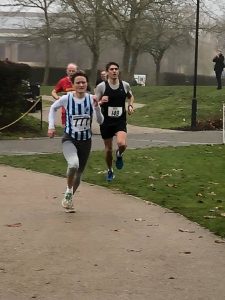 And the women’s trio of Alison Wood; Yuko Gordon and Susan McAneny won BRONZE in the team competition.

In the open race DEAN CARPENTER took 26 seconds off his personal best (PB) with 30 minutes 51 seconds.

JAMES KAY said, “My chip time was 32:38 and a PB.  Very pleased considering I collapsed at the Bedford half a few weeks ago.”

PETER CARPENTER had wanted to be under the hour… but did finish without stopping and wasn’t last, main target achieved!

GRANT RAMSAY ran the Bass Belle ten mile race a minute faster than last year despite picking up a calf injury and having to run in discomfort for the last three miles.   His 62:51 was good enough for 10th overall and third man 40 plus.  STEPHEN CURRY came in with 1:11:58.

KAREN ELLIS said it was a lovely route.  She was happy with her run and her time which was 1:26:32.

ALISON SHELLEY ran the Bass Belle for the second time along with a great gang of Spartans and like several others, got a PB which was 1:27:38.

HAZEL SMITH No official results yet but I have a watch time of 1:31:20 for the 10 miler today.

JULIE SHADBOLT really enjoyed the race.  She held a happy pace and was chuffed how she felt and came in with 1:35:14.

“Considering I have hardly trained in a fair few weeks,” said DEBBIE BLANTERN, “due to, literally, a pain in the backside, I was very happy with my time of 01:39:03. I was just 32 secs off my 10 mile PB…so imagine if I’d trained!  Watch this space next year.  It was a lovely race, perfect weather conditions and beautifully organised. And there was mud, a lot of mud!  We love the Spartans!”  There was a 1.5 mile off road section to the route based on Bassingbourn. 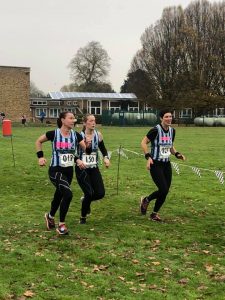 Jenny Garrett, Vicky Archer and Claire Emmerson ran the race together.  It was Vicky’s first 10 mile race and they all finished in 1:44:20.

CATHY CRAIG’s time was 1:46:40.  She said having just about recovered from an infected Poison Ivy arm and a virus, I just took it easy and enjoyed the race and was pleasantly surprised with my time.  Only nine minutes slower than last year.  Cathy added it was a nice catch up with my fellow Spartans including my running daughters.

Hertfordshire Half Marathon at Knebworth House 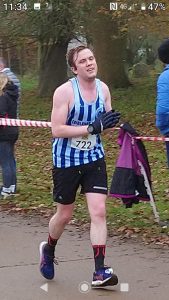 Spartan Tim Robinson was one of ten Spartans who took part in the Hertfordshire Half Marathon on Sunday 24th November.  The race starts in the grounds of Knebworth House before heading out to Whitwell and surrounding villages over a very undulating course.  He said he ran the first few miles but overconfidence got the better of him during miles 7 and 8 leaving not a lot left for mile 10 and 11 and the climb out of Whitwell.  But the last couple of miles saw a recovery and Tim finished in 2:04:35.

Matt Clarke ran the Hertfordshire Half Marathon in 1 hour, 44 minutes, 59 seconds and Jonathan Jones came in with 2:23:45.

SALLY PHILLIPS said her time was 2:54:42.  “It was my first ever half marathon which I found had lots of hills, maybe I will pick a flat one next time.”

Perfect weather for Sunday’s Silverstone Half Marathon. With a popular 5k and equally popular 10k also starting at the same time care was required to not let the faster runners drag you off too fast or mess up your pacing when they started accelerating for their finish. Duncan Flounders finished 291st  in a new Year Best time of 1:38:34, 11:31 quicker than his previous best time for 2019, while Richard Cowlishaw was not far behind, 436th in 1:43:06 and Rowena Rutledge was 1,682nd in 2:18:31.  Paul Holgate continued his progress in getting his body back up to half marathon distance even with his now long running foot injury, beating last week’s St Neots half marathon time by 6:46 for a new Year Best time of 3:02:01 in 2,035th position. There were 2,055 finishers in addition to the 1,872 10k finishers and 520 5k finishers.

Duncan said, “I ran the Silverstone half marathon, finishing in 1hr 38 mins 34 seconds.

It’s a decent event, pretty flat except for a footbridge at about 8 miles!  Felt good for the first half but struggled over the last 4K or so, happy to come in under the 1hr 40 mark.”

Yuko is a Record Holder

This weekend saw 28 Fairland Valley Spartans head out to run in Parkrun events around the country.  ASHLEY KING ran a PB on the Cassiobury course, coming in as the second woman, in 19 mins and 33 secs.  Elsewhere MO WARRILLOW was the 8th woman to finish the Panshanger run in a time of 25 mins and 30 secs, and in Stevenage GAIL MACKIE was the second woman in 20 mins and 47 secs and EVA RAMSEY the fourth in 22 mins and 41 secs.

Representing the men, STUART ARCHER finished 15th overall on the Stevenage course in 20 mins and 44 secs and TOBY ECCLESHALL 19th in 20 mins and 57 secs.

Many Spartans will be enjoying a busy programme of races, social and training events over the next few weeks:

Spartans at the Hertfordshire Half Marathon