Eight Spartans sped round the St Neots Half Marathon on Sunday.  Although it was a bit cold the lack of wind and fast course, particularly from ten miles to the finish, meant some good times were possible.

MARK GOODWIN was the first to finish.  Nothing wrong with 1 hour 45 minutes 24 seconds but he says a lack of training and hence fitness impacted on his time.

The next in was ED HARE.  He said, “This was my first St Neots Half and I thoroughly enjoyed it once I had got through the traffic!  The conditions were perfect and I settled into my running and soaked up the support through the villages and after the first couple of sharp inclines I realised I was already two thirds of the way through the race and was on for a PB (personal best). It was a training run which felt too good not to keep pushing and I was delighted with a 1 minute 33 second PB and a finishing time of 1:49:09.”

Half marathons haven’t gone well for JIM BROWN recently and this was a chance to get some confidence back.  After starting steady near the back by halfway he was thinking if I can get one minute in hand before going up the hill through Abbotsley I am going to try for 1:50.  He did it just and then tried turning the last 5K into a downhill parkrun to finish content with 1:49:17 which improved his best time for the year by 1 minute 45 seconds.

Both Mark Goodwin and Jim Brown achieved graded scores of 70%.

CHRIS HOLLAND started ten minutes late but was the fastest Spartan round the course:  He said, “I missed the start as the traffic jams meant I didn’t arrive with enough time to go through my usual pre-race routine.  I opted to do a warm-up and start late rather than not warm-up.  It took me a mile and a half to catch the tail runner.  I was reasonably happy with 1:41:44 as the last month hasn’t been kind and I had asthma problems pretty early on.

Go Faster at the Gosport Half – Sam Goes To London

Grant Chases the Moon at the Olympic Park 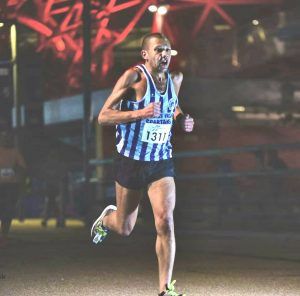 Grant Ramsay took part in the “Chase The Moon” 10K night race at the Olympic Park in East London.  He had an excellent race achieving a season’s best by almost 90 seconds, finishing in 36:29.  It was his fastest 10K since March 2019.  All this was good enough for an 11th place finish out of 458.

Dirt Half for Wendy

“Don’t forget to look up, very scenic.  Don’t forget to look down, lots of hazards underfoot.  Six miles along the grand union canal, five miles through beautiful woodland then return on the canal path.  I was very happy for my trail trainers as I squelched over the finish line. A great event,” said Spartan WENDY THARANI about the Dirt Half.  She finished in 2:15:44.

It was a hard day out in the Bedfordshire countryside for the three Spartans who took on the Steppingley Step.  Based on Barton Le Clay, the 26miles route went up the Sharpenhoe Clappers, then through ,Westoning, Steppingley, Ampthill Park, Flitwick and Flitton, Polloxhill.

A new personal best was achieved this Saturday by Mo WARRILLOW at Panshanger finishing in 25:29.

Three Spartans tried out new venues with Paul MAGUIRE at Westmill, Suzy HAWKINS at Walthamstow (1st ever Spartan at this venue) and Graham HOARE at Bournemouth (31:29).