Race winner in an excellent 29:02, 1 minute 58 seconds better than handicap was Simon Jackson who overtook all 39 runners ahead of him during the course of the five miles.  ELLA-MAY-HARDS was the first female to finish and second overall just 15 seconds behind Simon in a very good time of 33:02 and was also the fastest woman.  She pipped the second man to the line by two seconds. Ciaran McAneny had a running time of 29:47, with Andy Jay third male excellently paced by James Kay in 40:34.  Alison Shelley was second female with 42:11, just ahead of Samantha Pretty 33:16, Fiona Clark 42:07 and Michelle Reeves 33:44.

Steven Dobner, David Pattman & Nick Kleanthous were all closer to handicap than expected following their 10K race the previous day.  Callie Chapman and Hazel Smith trotted round beautifully as they began their recovery from last week’s New York Marathon.

(In handicap races the slowest entrant starts first with others following at intervals appropriate to their recent performances.  In theory if everyone runs precisely to form they will all finish together.  In practice the race winner will be the best improver, or on a hard day best survivor.  Paul Maguire was a much loved Spartan who died a few years ago). 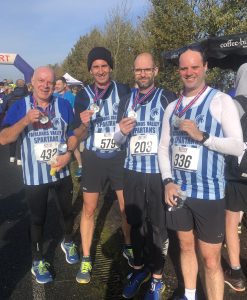 STEVEN DOBNER reports a beautiful Saturday morning greeted the Spartan contingent of four as they arrived at Carver Barracks for the Essex Remembrance 10K Run.  After a lovely 5K warm up at the Castle Parkrun DAVE PATTMAN and Steven set out for a sub 50.  The two lap course around the barracks was flat, fast and well marshalled. Feeling good after 5k Steven pushed on and was delighted with a time of 48:49 knocking just short of two minutes off his previous PB (personal best).  Dave came in with 48:55.

They say this was a well organised event marshalled by the Army Recruits.  It was a bright sunny morning but very chilly run around the Barracks and airfield

JIM BROWN returned to Stebbing in Essex for the Remembrance Day 10.  This started near the village church, just after 11a.m., and the two minutes silence.  Mindful of what happened racing seven days earlier Jim aimed to average 8:30 minutes per mile and despite losing some time in a rough climbing section just before eight miles managed it almost exactly with 84 minutes 54 seconds.  He was 242nd out of the 505 finishers and now feels a bit more confident about his next race.

RICHARD COWLISHAW ran the 10 mile at Draycote Water on Sunday in 1:18:58.  He said it’s his favourite place for training and running, especially if its sunny and dry like it was this time.

GERRY ROSEN said the Phoenix Remembrance Day Half Marathon in Walton-on-Thames was more like cross country considering the underfoot conditions made it extremely muddy.  Very surreal including everyone stopping dead mid race for the two minute silence as well.  He finished in 2 hours 38 minutes 19 seconds.

TRUDIE KING, TRICIA HOPPER, KAREN LIDDLE and BARRY KING all had a great run on Sunday at the Remembrance Day half marathon.  This was multi laps on a wet muddy tow path.  They say it was very well organised with an excellent medal.  The race was started with World War One whistles they used when going over the top.  The race was halted at 11am for two minutes silence where the field stopped.

A cold and crisp morning saw thirty Fairland Valley Spartans come out to run at seven different venues on Saturday.

There were six top 10 gender positions for Spartans with Ella MAY-HARDS taking first female position at Stevenage finishing with a time of 22:45. Christopher WESTCOTT was the quickest Spartan (18:36), taking third place at Stevenage on his first ever Parkrun outing. Dean CARPENTER (19:39) was 9th male at Stevenage, Mo WARRILLOW (26:07 – a personal best) 7th female at Panshanger, Ros INGRAM (26:19) third female at Letchworth and Richard KENNEDY (18:53- a personl best) 3rd male at Hunstanton Promenade.

Personal bests were also achieved by Elliott WHITE (20:05) and Charlotte KEARNEY (30:04) both at Stevenage.