The Stevenage Half Marathon, organised by Fairlands Valley Spartans, was a sell out.  83 Spartans helped organise the event, 43 Spartans ran the 13.1 miles and altogether 405 completed the race.

It was a brilliant morning, almost perfect for running the two lap course which started with 400 metres on Ridlins Athletics Track then took the cycleways to Fairlands Valley Park for a loop before heading for the southernmost part of the park, by the showground, to pick up Broadhall Way to complete lap one by crossing Woodcock Road.  The finish was excellent for friends, supporters and families as runners were in full view for 400 metres after they came through the gate and made their way to the finish line round the track. 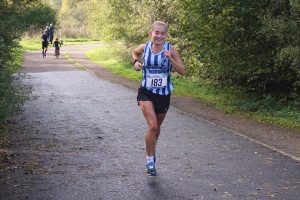 Despite the organising commitments there were many Spartan successes including ELLA-MAY HARDS who was second female senior in 1 hour 35 minutes 29 seconds; RHIANNON GRIFFIN running her first half marathon was third female senior in 1:45:10 and SIMON JACKSON tenth overall and third veteran in the county championships.

There was a fabulous Fairlands female one two in the county championships.  RHIANNON GRIFFIN, ASHLEY KING and KELLY EVANS 1:51:51 took GOLD in the open County Team Championships for women (18 and above).  Then GEORGIE HOOPER 1:56:39; FIONA CLARKE 1:57:47 and JENNIFER MALEKPOUR 1:58:07 won SILVER.

In the County Championships for veterans the Spartans won the team competitions for men and women.  Simon Jackson, Ciaran McAneny, David Harris-Cherguit and Dean Carpenter won GOLD for the men and Fiona Clarke, ALISON SHELLEY 1:59:36 and MO WARRILOW 2:01:33 GOLD for the women.

DARREN EMMERSON and many others loved the new adjusted course.

JAMES McSWEENEY said, “Six months after my knee being really bad I was pleased to get just over two hours.  Might have snuck under 2 hours if not for the almighty struggle that was the last two miles. 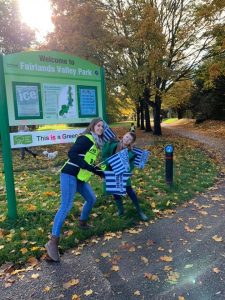 More than that though I just wanted to say how good the race was as an event.  It was a really well organised race from start to finish and had a really lovely atmosphere.  For a fairly small race (compared with some of the big city events) to basically have people (and lots I knew) all the way around was amazing and made those dam hills just a bit easier.  My two brother-in-laws from the Ely Runners, who I’ve done a lot of races with, were similarly impressed.”

This was ROB EVANS’ 11th appearance at the Stevenage Half Marathon and he was very pleased with his Season’s Best time of 1:55:09.

DAVID HARRIS-CHERGUIT said, “Such a great race today on the new course.  The sun always shines for the Stevenage Half!

Such great support out on the course.  Thanks to all the marshals, supporters and volunteers who made this the best one yet.

So pleased with a huge new PB today of 1.23.59.  19th overall and 8th in the MV40 category.  Thanks to the FVS coaches for the great training and support.” 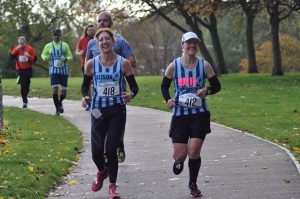 ALISON SHELLEY took three minutes off her personal best to get under two hours for the first time with 1:59:36.  It was her third half marathon event, first at Stevenage and she really enjoyed it.  Alison said, “Fantastic organisation by Sophie (Sophie Cowan, Race Director) and all the team and amazing support from all the Spartans.  A great day.”

ALICE POOLE really enjoyed her first stint as a marshal – lots of fun and lots of smiling runners.  Two things she learnt:  1) cowbells are great and a good workout after a while!  2) The general public are mostly lovely, friendly and courteous.  She said, Well done to all of the organisers! It was brill!”

The civic chain gang had a 100% attendance for this big event in the town which raised a lot of money for charity.  The Deputy Mayoress PENNY SCHENKEL was lead bike; the Mayor Councillor SIMON SPELLER and Mayoress BRIDIE SPELLER were on the first water station and the Deputy Mayor Councillor JIM BROWN was having a bit of a struggle towards the end but finished the event in 1 hour 56 minutes 17 seconds.  The Stevenage Half Marathon has been organised since 1984.

(Results for all 43 Spartans can be found near the end of this release).

On Saturday, the day before taking up marshalling duties at the Stevenage Half Marathon, DANNY SUTTON – FISHER improved his marathon personal best by almost ten minutes at the Enigma Fireworks Marathon.  In stormy conditions he ran 3 hours 43 minutes 22 seconds for the 7.2 laps around Caldecotte Lake in Milton Keynes.

Unusually it was rain, rain and more rain in Porto, the second biggest city in Portugal.  ROGER BIGGS and PAUL HOLGATE were in Porto to run the back up event to the Porto Marathon, the “Family15km.”  Roger completed in 1:50:09 and Paul followed in 2:05:59.

JIM BROWN ran the Serpentine 5K in 25 minutes 20 seconds.  He was third in his age category.

Many Spartans will be enjoying a busy programme of races, social and training events over the next few weeks:

All 43 Spartans at the Stevenage Half Marathon