After a very congested start and a lot of surge running to clear some space during the opening three miles, ED HARE completed the Milton Keynes Winter Half Marathon in 1:46:05 which is a 3 minute PB (personal best).  Conditions were wet underfoot and very windy, with a tight technical course which made life tough but he was really pleased to have improved his half time along with some other great runs from fellow Spartans.

STEVE DOBNER’s chip time was 1:49:53.  He said it was not his favourite course as it is very tight to start with.  The organisers tried to fix that this year with Wave starts but sadly the organisation didn’t match the idea.  Luckily the weather held so everyone enjoyed a sunny, if a little blustery run.

Steve set off with Ed Hare trying to hold on to 5 minute kilometres for as long as possible and then holding on to break 1:50.  Ending up  closer than he hoped at 1:49:53 but he was still happy with knocking over seven minutes off his previous personal best. 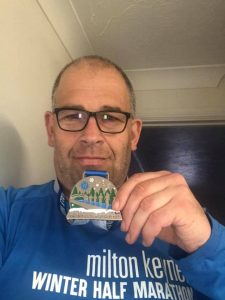 Rob Evans completed the race in a Season’s Best time of 1:53:12.  This was Rob’s sixth half marathon of the year – returning to running after major foot surgery last year.  Rob has improved his times from 2 hours 15 to 1 hour 53 over the course of 2019!

ALISON SHELLEY reduced her personal best by 22 seconds, getting under two hours for the second time with 1:59:14.  Great weather, great Spartan company and a nice one loop course.

GERRY ROSEN completed the MK winter half in 2 hours 40 minutes 21 seconds.  He said a little hamstring niggle after 9 miles slowed him down !!

ADRIAN BUSOLINI: ran 3 hours 5 minutes 50 seconds to secure first place in the Christmas Enigma marathon in Milton Keynes on Saturday, with a personal best (PB) of around 12 minutes.

He said, “After being given race number 1, I knew he had to make a bit of an effort!  It’s my second consecutive win at Caldecotte Lake, so the pressure will be on next time to keep the winning streak running…”

On The Road Again

On the Friday evening, Roger ran the Santa 5km in 32:26. As runners stood waiting to start, there was an absolute downpour , which abaited as the race started, but left a flooded course

On Saturday it was 10km race, run from the Capital Arrecife to Costa Teguise. Roger completed the distance in 1:17:56.

Several Spartans enjoyed the Santa Canta 5K on Norton Common in Letchworth.  They included YUKO GORDON with 23:39. NEIL ROBINSON in 27:01 and many enjoying the festive fun.

Spartans participated in parkruns at eight different venues across England.

Jonathan Parr took his winning ways to Millennium Country Park near Bedford.  He was first finisher in 16:50.  The male record at this PR is 16:23

At Stevenage it was stripey Saturday with a strong turnout of 35 Spartans.  Abigail Pez was second female in new PB of 22:24. She was also first in her age group.  Marian Morley also achieved a new PB of 27:07.  She said, “I am so pleased to finish my running year with a PB at the Stevenage parkrun this Saturday.  Couldn’t have made the progress I have without the support of the Spartans team.

I’m taking a short break now and I hope to be out running again in the new year.”

A total of 53 runners took part.

A total of 70 runners took part.

A total of 99 runners took part.