A fifth Spartan woman has qualified for the British marathon championships!  An injury meant SUZY HAWKINS couldn’t target the same race as her amazing Spartan friends on the sub 90 minutes mission.  But with a stripey team now entered in the championship start at London she really wanted to be on that start line with them.  The deadline for entries is 31 December, so she thought would give the four laps of the Dorney Lake Half Marathon a go.  Suzy honestly thought “if I do it I have a 1% chance of qualifying, if I don’t zero%.”  It was very windy.  She was amazed and delighted at the pace she managed to maintain and was over the moon to win, and take almost three minutes off her personal best with 1 hour 27 minutes 14 seconds, but it was about joining the amazing women in the first ever Spartans marathon championship team.

Suzy Hawkins, Ashley King, Gail Mackie, Sam Pretty and Michelle Reeves are the famous Fairlands five.  All had to run a half marathon in less than 1 hour 30 minutes by the end of December to qualify for the marathon championships on Sunday 26th April. 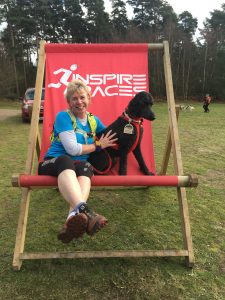 Rufus and JANE WHITROW ran a 10K race through Thetford Forest on 15 December.  She said it was a fast course; all off road with a mixture of grass, sandy and rocky paths.

It was amazingly dry under foot, Rufus (her dog) didn’t need to be dried off at all.  There was a very civilised 10.30 start for the runners and 11.15 for the Canicross.  The event was based at High Lodge where Go Ape is, the mountain biking centre, café, etc., so great facilities for before and after the race.  The sausage roll got a gold star from Rufus.  This was race 1 in a series.  Races 2 and 3 are January and February.

Jane has space if any Spartan wants to join her for races two and three, with or without dog.

SIMON JACKSON did the Festive 5 in Welwyn Garden City on Sunday.  He said conditions were fresh but with a bit of sunshine on the rolling course it was a fun morning.  He started in his Santa hat but by a third of the way round had to take it off.  Simon finished fifth overall in 28:34 and was third in his age group.

Despite a rather indifferent weather report for Pisa, the sun came out, the wind dropped to nothing, and it became a lovely day for running

Starting and finishing with the Iconic Leaning Tower of Pisa in view, ROGER BIGGS completed the Pisa Half Marathon in 2:51:15

As the rain fell 34 Fairland Valley Spartans’ headed out to run Parkrun events this weekend.

Further afield GRACE BROWN was the fourth woman to finish the Canons Park course in 24 mins and 39 secs alongside TIM SABAN who was 7th overall in 21 mins and 42 secs.  At Hunstanton Promenade NICOLA KENNEDY finished as the second female in a time of 24 mins and 04 secs.

Other landmark parkruns at Stevenage included CLAIRE EMMERSON running her 70th in 30:41 and JIM BROWN his 40th in 31:06.

Many other Spartans enjoyed the club’s annual off road run to Minsden Chapel.