Spartan JIM BROWN won two events in Sunday’s Fly races.  He was first man 65 plus in the half marathon with 1:59:21 and also first in the same category in the five miles with 43:31. 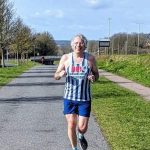 While not as extreme as Saturday it was still a windy day on Sunday.  Running solo in a virtual event you’ve no idea how other runners are doing so I had a vague target to beat two hours on the far from flat 13.1 miles course I’d given myself around Stevenage.  I achieved that with a few seconds to spare and the first place was a nice bonus.

Fairlands Valley Spartans are racing round England.  They started in Bristol and are running, walking or cycling 2,970 kilometres anti-clockwise round the coasts and borders of the country.

At the end of Sunday the men’s and women’s leaders were chasing each other across Essex and only 20 kilometres apart.  In the lead BRIAN WHITE is through Clacton on 1,308 kilometres with PENNY SCHENKEL at Wivenhoe with 1289 kilometres having gained 24 kilometres in the last week.  They should have the prevailing wind behind them for a while now.

Third placed JIM BROWN is in Westgate-on-Sea, Kent with 1,130 kilometres.  Fourth placed SHARON CROWLEY is the latest through 1,000 kilometres at 1,046 and is approaching Old Romney in Kent.

KEN JUDE is running through the North Solent Nature Reserve with 810.4 kilometres while HAZEL SMITH is just a few paces beyond 500 miles with 803.3 kilometres having caught band passed Cathy Craig.  She is in Lymington.

CATHY CRAIG, in seventh on 794 has just passed through Christchurch and LIZ CROWLEY is approaching Lulworth Cove with 745 kilometres.

Seaton is almost in sight for PAUL HOLGATE on 672 kilometres and the Spartan Top Ten is completed by TRACY PEZ who is in Torquay with 623.

All but one of the Spartans have turned the corner at Lands End and there’s still plenty of scope for catching up.  All aim to finish by the end of the year.  The team total so far is 11,107.60 kilometres – the equivalent of going round the course nearly four times.

In addition to those using the same effort to record Fly 5K times on Saturday NICOLA ANDERSSON ran a 26:36 (not) parkrun on Tuesday followed by 27:29 from NICK KLEANTHOUS on Wednesday and PAUL JENNINGS with 29:07 on Friday.

On Saturday PAUL SHELLEY ran a new parkrun personal best of 23:29 while JIM BROWN recorded 26:26 at the start of his virtual half marathon on Sunday. 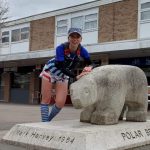 Spartan FIONA CLARKE will be running THREE marathons for charity.  They are the Richmond Marathon, planned for 16th May; Peterborough Marathon on 23rd May and Manchester Marathon on 10th October.  She’s raising funds for the East and North Hertfordshire Hospitals Charity 25th Birthday.

Meanwhile JIM BROWN is still raising money for the Mayor’s charities via https://uk.virginmoneygiving.com/JimBrown20

Virtually nothing stops Fairlands Valley Spartans and they have now run over 27,000 miles in 127 days in their relay race across North, Central and South America.  Lockdown 2 – Briefly Tier 3 – Now Tier 4 and they continue into 2021.

Having covered the USA, Canada, Mexico and Central America they are now several days into South America and reached Cordoba and ran the local marathon on Sunday.  They also visited Miramar and Lake ‘Laguana Mar Chiquita.’  Now they are still in Argentina but heading for Parana.  On Sunday 54 members recorded a total of 127 miles giving an overall total of 27,344.  That’s more than one round the world.

This challenge will end on Sunday 28th March, the first day of summertime and the day before it looks likely that group training can restart.