Wednesday evening saw the Spartans Stripy Army travel to Cambridge for the penultimate fixture in the Central Division of the EMAC Track and Field League, with the women topping their league and the men lying in third.

The ladies’ dominance continued as they put in another strong showing, managing to field a competitor in every event across all the age categories.

Cathy Craig achieved a personal best (PB) of 15:34.6 in the 2km Walk whilst also winning the High Jump.  Sharon Crowley achieved a season’s best (SB) 17 metres in the Hammer.

Alison Wood won the 1500m, Tessa Stephenson won the Shot (8.26m) and 400m (77.2s) achieving a SB in both, whilst Monica Brown was triumphant in the 100m, High and Triple Jumps. They were ably supported by Iris Hornsey, Stephanie Mayfield and Andrea Westcott who all put in strong performances in their respective events ensuring the women won the fixture.

The men saw David Bowker and Barry Osbourne return to the fold putting in strong performances in the 2km walk, 400m and 1500m.

Highlights for the men’s team included wins which set two new club records.  Christopher Westcott finishing the 1500m in 4:20.9, a full 13 seconds ahead of the competition and Richard Bruce, along with his 400m win, topping the High Jump with a height of 1.60 metres, results which helped the men secure second spot on the night.

Going into the final regular fixture, to be held at Stantonbury Campus, Milton Keynes on Wednesday August 1st, the women have all but qualified for the finals being held in September.  The men will qualify if they can put in a strong showing and beat Bedford and County who currently lie 0.5 points behind them.

The general consensus was that it was way too hot to race in Ware on Sunday.

DANNY SCANLON was fastest from Fairlands in 68 minutes 56 seconds.  Danny said, “The ten mile race was on a tough two lap course in the heatwave but with lots of water stations including an extra one provided exclusively for Spartans by TIM SABAN.  That was much appreciated as were the two local residents with garden hoses.”  He was fourteenth overall.  STEVE GREEN was next in 1:15:52 and MARK GOODWIN won the veteran 60 plus ten mile race in 1 hour 21 minutes 24 seconds. 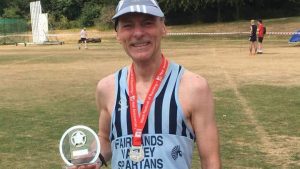 ERICA GRAYSON said, “What an amazing day.  It was hot and not a day for personal bests but a day for fun and support amongst the running community.”  She finished in 1:39:45.

Jim is a County Champion

Overcoming a long train journey from a three day conference in Birmingham and a ridiculously hot day JIM BROWN time trialled 25 laps of the Sandy Athletics Track under the lights Thursday evening to win the Herts County Championship for runners 60 plus in 50 minutes 12 seconds.

He said, “The race didn’t start until 9p.m.  The conference and journey wasn’t the best preparation and the hot conditions far from ideal, I’d say I was dehydrated before I started, but a GOLD medal was very welcome.  I worked hard for that!”

Despite the very warm evening 26 Spartan lined up for the Handicap 5K on Thursday evening.

CYRUS’ 19:46 was also the fastest time of the evening with PAUL ROBERTSON second quickest in 19:51 and TIM SABAN 3rd fastest in 20:59 after having already run a warm up lap of the 5k first. HAZEL was quickest lady with SUSAN McANENY 2nd fastest lady in 25:18 and newcomer JENNY TOMPKINS 3rd quickest with 25:52.

There were also PBs for PAUL JENNINGS, 28:29 and  SHELBE MOONBEAM 32:07; Season Best times for SARAH SAPSTEAD and PAUL WHYTE (who would have finished 2nd overall had he started at his correct handicap, but arrived at start almost 4 minutes late) and a year best time for KEN JUDE even despite having had cycled 40 miles earlier in the day.

ROGER BIGGS ran the North Herts Midsummer Dusk 5k in Letchworth.  His time was 36:20, giving him 61st out of 64 finishers.

It was a busy first Saturday of the month for Spartans running across six different locations.  Dan MCALPINE won in Luton in a superb new PB time of 16:43.

In Bristol Danny SUTTON, 28:13 and Verity FISHER, 28:14 made their first trip to Pomphrey Hill parkrun.

The Great Glencoe Challenge 2018 26.2 miles from the heart of Glencoe through Kinlochleven to the foot of Ben Nevis near Fort William was hot in the morning 22 degrees C then went cloudy in the afternoon.  TOM SAUKA came third in his age group and fourth overall.  The Fairlands Valley Challenge off road event is this Sunday, 15th July.