Spartans MARK GOODWIN and CATHY CRAIG were prizewinners at the Welwyn 10K on Sunday.  Mark was first man over 60 with 48 minutes 10 seconds and Cathy was third woman over 65 in 61 minutes 53 seconds.

MIKE GREEN was fastest of the twenty Spartans in 41 minutes 43 seconds and RUTH REILLY fastest female in 48:04.  She was chased in by Mark Goodwin who enjoyed what he said was a novel experience of being a prize winner.

JIM BROWN said, “It was emphatically a race of two halves with a ‘mountain’ to climb between 2 and 4 kilometres.  It took me 26 minutes 47 seconds to get to 5K but only 23 minutes 29 seconds from there to the finish.”

REECE McCULLAGH ran his FIRST race ever as a Spartan on Sunday at the Welwyn 10K.  He came in with a brilliant time of 47.11 which placed him in 101st position overall out of the 521 finishers.  Reece said he found the race quite challenging, especially with the two hills and hot weather.  He was joined by many fellow Spartans and appreciated the support throughout the day.  Reece totally enjoyed the race and found it to be very well organised.

TIM SABAN scored more than 70% on age standard.  VICTORIA BRETT and CLAIRE HYDE came in second and third women for the club with 58:55 and 58:56.  MONICA SMITHSON beat the hour with 59:51.

(All Spartan times at the end of this release).

There were two Southern Masters M45 Golds for Fairlands Valley Spartans at Battersea.  Grant RAMSAY with a scorching last lap in the 3K steeplechase to record 10.58, finally getting under his 11:00 goal.  He was first M45 and first overall.  Richard BRUCE won GOLD running 54.81 in the 400 metres.

In a well paced run in the heat, Ramsay was able to make his last lap the quickest (91 seconds) and get under the magic 11:00 minutes.  Grant said “This my quickest time for years and I am now looking forward to the British Masters Championships in August.” 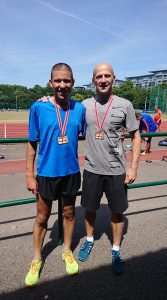 Six Spartans ran the hilly Hitchin Hard Half Marathon.  This was a tough race in warm conditions.  It followed an out and back route from Hitchin up to Preston via Offley Holes hill (Charlton), down the Lilley Bottom Road then back up again.  KELLY EVANS ran a great 2 hours 5 minutes 36 seconds to be the first Spartan finisher.

St. Albans Summer Solstice 10K.  JAMES KILROY ran this race organised by St. Albans Striders on Friday evening.  Almost identical route to the Mid Week League 10K but with a shorter start on the field and an added loop round a residential area at the end of the 4.5k run out.  Really well organised, chip timed, well marshalled, BBQ and music afterwards, highly recommend.  He was happy to take 42 seconds off his MWL effort with a chip time of 52.02, after a week off with throat infection.

Come And Cheer On The Spartans

Fairlands Valley Spartans racing in Fairlands Valley Park.  Wednesday evening’s Mid Week Road Race League fixture will be in Stevenage.  Starting on Gresley Way near Ridlins Track the race will go up the cycleway to the park through pass to the left of the large lake, the right of the middle lake, continue inside the park to the junction of Chells Way and Fairlands Way, the highest point, then swooping down alongside the long hedge back to Six Hills Way and the finish on Gresley Way.  The race starts at 7.45p.m.

The walkers were Sharon Crowley and Mike Crowley in 7:45:30.