Several Spartans ran the Run Around the Garden 5K in Letchworth.

SALLY McBRIDE said “I was only into my second week with Fairlands Valley Spartans but I managed to pick up a new personal best.  My second in nine days which is amazing but I also managed to run a sub 30 for the first time.”  She ran the Round the Garden 5K in 29:06 compared with her previous best of 30:43 at the Stevenage Parkrun.

28 minutes 18 seconds ANGIE KEELING improved her PB by 21 seconds.  This was her first 5K in an event affiliated to England Athletics.

JOHN HARRIS ran a season’s best 20:09 and came 20th overall.  He said it was a nice, well organised event.

On the come back trail ROGER BIGGS 37:22 was better than his park run the previous day.  He said, “A little bit at a time and I’ll be taking chunks off that.”.

ERICA GRAYSON enjoyed a weekend of personal bests.  On Saturday she ran the Harpenden Five in 44:13, a PB by 91 seconds and on Sunday the Run Round The Gardens 5K in Letchworth in 26:14, a PB by 20 seconds.

Erica said, “I had a fantastic weekend with my Spartan family.  I was very happy with a PB on Saturday.  It was a lovely race with a beaut of a hill thrown in and then to PB the next day in Letchworth was fantastic.  But the highlight of my weekend though was my 15 year old coming second in Letchworth and achieving his goal of a sub 18 minute 5k by 2 seconds.

CAROLE SHELDRICK totally enjoyed the run and came in with a time of 25:49.  She said she will definitely run again next year. 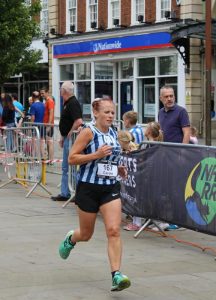 John Nelms ran the Enigma “Word Up” Marathon 2 on Sunday morning.  This consisted of 7.5 scenic laps of Caldecotte Lake in Milton Keynes.  He finished in 4 hours 15 minutes.

That’s John’s 9th marathon of the year so far ….

This week’s Parkrun events were the scene for various personal achievements for the 33 Spartan’s who ran.  PB runs were recorded for VERITY FISHER at Belton House in 25 mins and 10 secs, KELLY McHALE at Wimpole Estate in 26 mins and 12 secs, PAUL JENNINGS in Stevenage at 28 mins and 37 secs, and ELLA GOWER in Letchworth at 34 mins and 4 secs.  The Stevenage event saw milestone races for KAREN PALMER who completed her 50th Parkrun in 25 mins and 58 secs and DAVID SCOTT who finished his 70th Parkrun in 27 mins and 40 secs.

Finishing within two minutes of each other, ANDY JAY, KEN JUDE and TIM ROBINSON completed the Panshanger course in 25 mins 6 secs, 26 mins and 13 secs, and 27 mins and 15 sec, respectively. While first time runs at new venues saw MICHAEL O’KEEFE run the Brockenhurst event in 26 mins and 29 secs, DANIEL SUTTON complete the Belton house course in 24 mins and 43 secs, and PAUL WHYTE finish the Stevenage course in 35 mins and 27 secs.