No less than 26 Spartans including several first timers enjoyed almost ideal running conditions as they all completed the London Marathon.

Achieving a championship qualifying time GRANT RAMSAY finished in 2 hours 42 minutes 22 seconds.  That put him in the top 1% in the field at 404th and 67th in his category.  The second of three Spartans, a fantastic achievement, to beat the three hour barrier was ANDREW PATTERSON in 2:47:55.

JASON ANDERSON ran nearly perfect splits taking 12 minutes off his personal best to finish in 2 hours 52 minutes 28 seconds.  He went through halfway in 1:26:08.  Jason collapsed near the finish line last year.  No problems this time.

NATALIE LAWRENCE was the fastest female from Fairlands Valley in 3 hours 19 minutes 38 minutes.  An incredible race considering she had her third baby just eleven weeks ago.  Three other Spartan women beat four hours.  They were NICOLA KENNEDY in 3:42:18; MICHELLE REEVES in 3:43:22 and KERSTIN WEINER in 3:56:28. 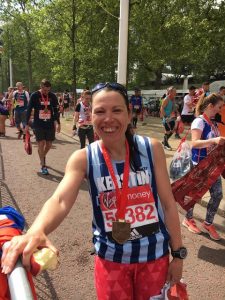 Marathon first timers CLAIRE EMMERSON and SOPHIE COWAN met where the starts merged about three miles into the race and helped, and chatted, each other all the way to the finish.  Claire took 4 hours 30 minutes 55 seconds and Sophie 4:35:14.

JENNY GARRETT was another Spartan first-timer coming in with an impressive 4:18:33.  She ran a perfect debut marathon, with all 5K splits evenly paced.  Jenny went through half way in 2.09 and finished race in 4.18.  An amazing debut.  Fairlands Valley Spartans are known for preparing runners from ambition to finishing the London Marathon and celebrated more first time successes with MARK COLLINS in 3:40:06 after an injury-interrupted preparation, JENNY PAUL in 4:47:12, WAYNE McMILLAN in 6:02:55. 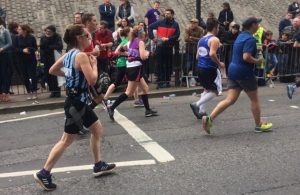 Dozens of Spartan volunteers helped make the event possible by working beyond the finish line getting the correct kit to tired runners after their 26.2 miles.  Well done and thank you the Fairlands Valley baggage buses crew.

Andy Jay ran the Southampton Half Marathon on a perfect morning for running.

He got around the one lap course in 1 hour 52 minutes 59 seconds, finishing 1080th out of 3748 runners.  The organisers of the event put on a fantastic festival of running, hosting a 10k, half marathon and full marathon all on the same day.

On Tuesday evening in Battersea Park, DAVID BOWKER took part in the first of five races in the Veterans Athletic Club five mile walk series.  He finished sixth in a new personal best of 51 minutes 25 seconds.

Fastest Spartan of the parkrun weekend was CRAIG HALSEY.  He went to St Albans where he was first finisher in 16:40.  MARK GOODWIN has trained well in recent weeks and achieved a new course PB at Panshanger where he finished 33rd in 21:45.

Further afield, DARRYL STEVENS ran 36:54 at Brockenhurst while ANOUSKA GREENAWAY was at Worthing and finished 2nd in  20:05. Finally, DANIEL SUTTON ran 23:16 at Yeovil Montacue while VERITY FISHER finished in the top 20 at the same venue in 25:44.

Many Spartans will be enjoying a busy programme of races, social and training events over the next few weeks.  The opportunities include the County 1500 and other track championships in Stevenage on Monday 1st May.  Others are: