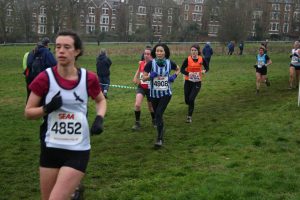 Nine Spartans, so more than a complete team, were among the 694 who finished the senior women’s championship which was over eight hilly and extremely muddy kilometres on Parliament Hill Fields in Hampstead, London.

Finishing a qualifying team of four runners was a big achievement for the club, something many others failed to do.  Actually the Spartans got two complete teams round but only the first one with 1743 points and in 63rd place was listed in the club championships. 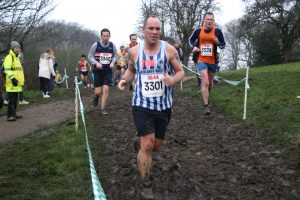 Entries for the men’s event were perhaps depressed a bit by the recent imposition of a time limit.  This was the last race of the day and the course had been really chewed up and turned to liquid mud by the many earlier events.  It was over a truly challenging 15 kilometres.  Spartan THOMAS SAUKA was 1045th in 1:19:27 and TIM ROBINSON 1163rd in 1:32:30.  There were 1172 finishers.

*Ella-May was representing her first claim club, City of Salisbury.

He said it was an undulating course, but interesting.  The wind was up which helped in some places, but then hindered in others.  Tim commented it was a very well organised event on closed roads with a new course layout for this year.  That now means the route stays on surfaced roads with no off road sections.

JIM BROWN and PENNY SCHENKEL went for a couple of absolutely traffic free races at Dorney near Windsor. 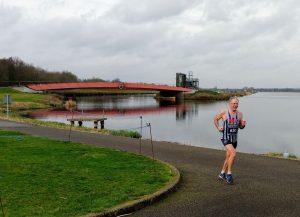 Penny did the two laps round the lakes used for the Olympic rowing in 2012 for 10K in 60 minutes 4 seconds while Jim, who reckoned he needed 13.1 miles after the Fred Hughes event the previous weekend, ran a 6.1 kilometre first lap then three lots of 5K to complete a half marathon in 1 hour 51 minutes 57 seconds.

There was just a little rain.  While the course was almost perfectly flat apart from a bridge there was a January headwind off the water for the second half of each lap.

Fifty five Spartans headed out to seven different Parkrun venues this Saturday. Parkrun continues to see high numbers turning out for all venues. The attendances at Stevenage for the first 5 weeks of the year are now the top five attendances in its history, all reaching over 500 runners every week.

GRACE BROWN was the Spartans top ten finisher this week.  She was third woman at Stevenage with a time of 23 minutes 30 seconds.

The fastest Spartan was Dean CARPENTER at Stevenage with a time of 19:31.

Cathy BAKER achieved a new PB of 33:05 and Lee PIROTH ran his first ever Parkrun.

Paul JENNINGS both tried out a new venue at Aldenham.