As if a “normal” marathon isn’t hard enough Sunday’s Fairlands Valley Challenge offered an off road marathon and an ultra 50 kilometre course as well as shorter, but not short options, of a half marathon and 18 miles.  Nearly three hundred runners started the event which was organised from Stevenage by Fairlands Valley Spartans.

This was the 25th Fairlands Valley Challenge.  The event offers participants the chance to prove themselves against the hills and off road terrain of the Hertfordshire countryside in a friendly and non-competitive environment.

Each distance takes a different self-guided route, starting and finishing at Marriotts Sports Centre.  There were five check points along the way which were manned by an amazing team of volunteers.  A huge thank you to Race Director Tim Robinson on a very successful event.

Spartan SHARON CROWLEY has taken part in all 25 Challenges, 24 of them at marathon distance and one ultra.  On Sunday she finished the marathon in 7 hours 54 minutes 38 seconds.

Relays in the Park

If you are not running this Thursday evening will be a great event to watch.  The action starts in Fairlands Valley Park at 7.45p.m. with each runner racing a 3K stage.  There will be women’s, men’s and mixed teams.  A good place to spectate will be near the bridge between the middle and top lakes where you can see runners at about two kilometres and at the handover point and finish.

A damp evening did not put off four Spartans competing in the Bedford AAA 10K on Friday evening.  SUSAN McANENY ran a new personal best of 50 minutes 13 seconds.  An improvement of 57 seconds.

New Spartans member STEPHEN CURRY took in the Caterham Half on Sunday.  This was two laps around Redhill Aerodrome in Surrey.  He finished in 1 hour 37 minutes 25 seconds. 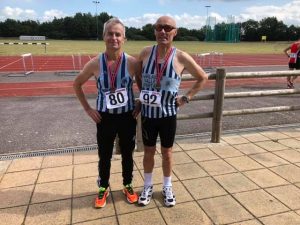 JOHN HARRIS and DAVID BOWKER went to Southend for the EMAC (East of England Veterans) track and field championships.  Dave won the 60 plus 1500 metres in 5 minutes 41 seconds and in a close finish John won bronze in the 55 plus race with 5 minutes 16 seconds.

Dave says it was a nice sunny day with lots of competitors.  That’s apart from one cloudburst which started five minutes before the walk and finished five minutes after it.  Good fun watching it.

With the Summer holidays finally upon us, this Saturday saw 33 Fairlands Valley Spartans running at a total of 16 Parkrun Events across the country. On the Aldenham course MALCOLM MACGREGOR achieved a PB time of 26 mins and 28 secs. While at two separate events female Spartans finished as the first woman: ASHLEY KING at the Barclay run in 21 mins and 35 secs; and, EVA RAMSEY in Stevenage in a time of 22 mins and 47 secs. Also, in the top 10 female finishers at the Stevenage event was VERITY FISHER who came seventh in a time of 25 mins and 04 secs. Attending the Princes event in Liverpool for the first time GAIL MACKIE finished as the second woman in 21 mins and 09 secs. STUART STABLES was seventh overall to complete the Plean run in 23 mins and 12 secs where he too attended for the first time.