585 runners from 20 clubs ran in the Mob Match at Welwyn Garden City on Thursday evening and 84 of them were from Fairlands Valley Spartans.

This was a celebration for the Stevenage based club which was promoted to Division One of the Mid Week League in the last counting race of the reason.

Many Spartans ran together in groups often encouraging new members who were running their first ever 10K race but this did not stop the club finishing third out of twenty beating several who will be in Division One next year.  A very positive indicator for 2020.

The men, with a total of 51 runners, were fifth but scored well enough to contribute to the third place overall.  CALLUM STEWART was third in the race with 33 minutes 48 seconds.  GRANT RAMSAY 38:04; KEITH COUGHLIN 39:03 and DANNY HUKIN 39:29 also beat forty minutes.

(All 84 Spartan times can be found near the end of this release).

Race to the Stones

Ultra took over from 10K at the weekend.  Eleven Spartans took on the 100 kilometre Race to the Stones.  That’s 100km along the oldest path in Britain, The Ridgeway, and finish at the iconic Avebury Stone Circle.

TIM SABAN ran the race straight through on Saturday.  His official time was 11:20:15 giving him 52nd overall and third in his age group.  He says. “I had a brilliant run on a very difficult and challenging course let alone it being over 62 miles long.  Erica Grayson followed me in the car, whilst I ran, offering roadside support and encouragement along the way.”

Jenny Garrett pulled out at 75km after persevering with a damaged calf muscle. 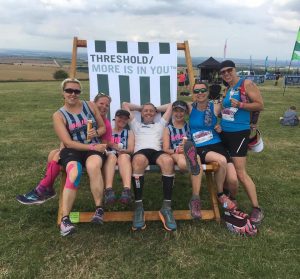 Hazel said the terrain was very tough with many uneven chalky surfaces.  Well the path is 5,000 years old.  Night running was the toughest but we kept moral high by singing and enjoying the spectacular views along the way!  They’d like to thank their fabulous support team (Darren Emmerson and Jenny’s husband Andy).  Without them this would not have been possible.  Darren even put on his running shoes and supported by running 25K of the route!! 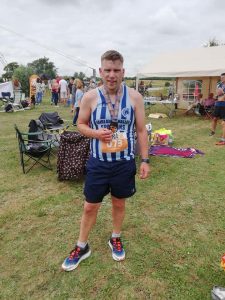 DANNY SCANLON completed the ultra 5K in Box End park today.  The race consists of five 5k races which start at 9 and on the hour thereafter.

He said it was a well organised enjoyable race with lots of food, gels, cakes, drinks and massages included!  It was a tough race and he did find it tough as the races went on as his legs tightened and tightened.  Danny recommends this one.

CHARLOTTE KEARNEY loved the City 10K in Shoreditch and she achieved a new personal best of 1:02:22.

486 runners took part in this year’s Milton Keynes 10K race in the East Midlands Grand Prix series including Spartans Roger Biggs and Paul Holgate who have taken part now every year since 2002.  In fairly humid conditions and in his 254th 10k race, Paul improved on his Stevenage 10K time from 2 weeks ago by 7 minutes and 21 seconds to finish in a Year Best time of 72:54, while Roger, taking part in his 170th 10k race, improved on his Stevenage 10K time by 4:57 to finish in 74:51

The Fairlands Valley Challenge off road events are coming up this Sunday 21st July.  They start and finish in Stevenage.  Have a look at www.fvspartans.org.uk  The Relays in the Park will be on Thursday evening 25th July.  The Stevenage Half Marathon will be on Sunday 3rd November.

Thirty one Fairland Valley Spartans headed out to run at seven different Parkrun venues on a cooler morning. It has been a weekend of newcomer, new venues, milestones and PBs.

Andrew VAUGHAN completed his first Parkrun at Ellenbrooks Field in 19:32.

Three Spartans tried out new venues with Dean CARPENTER and Paul SHELLEY at Ellenbrooks Field and John ROXBOROUGH (22:24) at Aylesbury.

Some other Spartans including YUKO GORDON, CAROL PAUL, PENNY SCHENKEL and JIM BROWN enjoyed the Baldock Cycle Challenge which was organised by Baldock Events Forum and Cycling UK Stevenage.

33 Spartan women at the Mob Match

51 Spartan men at the Mob Match