Fairlands Valley Spartans were out in force on Sunday with 28 runners making the short trip to Ware, for the annual 10K and 10 mile events hosted by Ware Joggers.  For July, the weather was ideal, warm but mostly overcast.  24 ran the ten miles and four the 10K. 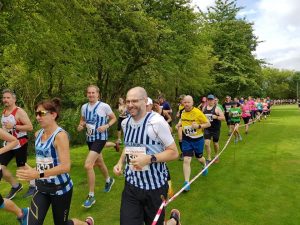 BRIAN WHITE enjoyed the very scenic course which took in two laps either side of the River Lee.  He was second veteran 60 plus and 42nd overall with 1:12:48.  MARK GOODWIN was third veteran 60 with 1:18:08.  He was pleased with his run as he was three and a half minutes faster than last year.

FIONA and MATT CLARKE had a great run at the Ware 10.  Fiona ran her first ever ten mile race in 1:28:50 and Matt finished in 1:24:48.  They said it was a lovely route, with brilliant support from marshals and spectators, and well organised.  Fiona would highly recommend this race for next time.

Another Spartan with a wonderful run was STEVE DOBNER.  He said, “It was on an interesting two loop course with excellent marshals and numerous water stations.  I felt pretty good after managing my pace at the beginning and decided to kick on at seven miles catching and passing the legend that is Andy Jay.  I’m very pleased to have broken through the sub 1hr 30 and a chip finishing time of 1:27:31 gave me a whopping 7 minute 49 second personal best.”

ANTON McCALLA took part in the 10 mile race.  He said it was quite tough in the heat, but a really well organised and supported event.  He had a chip time of 1:36:06.

TIM SABAN was the second fastest Spartan with 1:11:26.

Erica GRAYSON said it was a cooler day than last year and there was an abundance of Spartan stripes.  On her road to recovery she finished in 1:40:56. 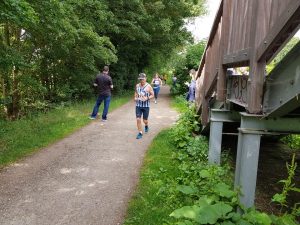 ROGER BIGGS won the veterans aged 70 plus category with 2 hours 19 minutes 34 seconds.  He said the hills started within the first mile.

(All 28 Spartan results can be found near the end of this release).

There was a fantastic turnout of 51 Spartans for Thursday evening’s Handicap 5K in Stevenage.

Winner on the night as he continued his recovery from injury was Paul Maguire in 23:29, with Malcolm MacGregor second in a new personal best (PB) time 26:51 and Mark Collins third in a season best (SB) time of 19:17.

The next Handicap 5k (to be confirmed) is scheduled for Thursday 1st August.

At the half way point, 30th June YUKO GORDON, SUZY HAWKINS, ASHLEY KING, JOHN HARRIS, STUART HAYCROFT, JIM BROWN and PAUL HEWETT were all leaders in one of the Fairlands Valley Spartans club championships but with six months to go some of the leads are tiny and many quick runners have yet to record a full swet of qualifying times.

But in the women’s short distance age related championship Yuko Gordon leads with a score of 96%!  In the open category Suzy Hawkins leads with 71.7% with Yuko on 66.0% and PENNY SCHENKEL on 54.2%.

Ashley King leads in both women’s long distance categories with GAIL MACKIE and ISABEL GREEN not far behind.

On Tuesday JOHN NELMS travelled to Barrow in Suffolk to run in the great barrow challenge.   This is a 10 marathons in 10 consecutive days event but john only ran 1 ( this year).  A very hilly and almost all off road trail run in very high temperatures. John finished in just under 5 hours – using it as a training run for the 100k race to the stones next weekend.

The Fairlands Valley Challenge off road events are coming up soon on Sunday 21st July.  They start and finish in Stevenage.  Have a look at www.fvspartans.org.uk  The Relays in the Park will be on Thursday evening 25th July.  The Stevenage Half Marathon will be on Sunday 3rd November.

At Stevenage it was stripey Saturday with 25 Spartans running.  Stuart Haycroft was second placed finisher (18:31) and Dean Carpenter came fifth in a new PB (19:19).

John Roxborough was in Roding Valley near Chigwell for the first time running 22:15.

A total of 81 runners took part.

A total of 90 runners took part.