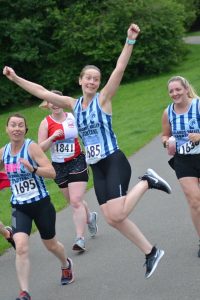 Fairlands Valley Spartans have been promoted!!  The Stevenage based club came from behind in the last counting race of the season to win promotion from Division Two to Division One of the Mid Week League.

The event showed that the club is for all abilities with the faster runners winning promotion and dozens of others doing their bit, enjoying the event and in many cases running a 10K race for the first time or achieving their own personal bests.

Nearly 500 runners ran the two lap 10K course which finished in Fairlands Valley Park.  The amazing thing was that fourteen clubs took part but of the 485 finishers 109 were Spartans – that’s 22.5% of the whole race.  They set themselves a high target of one hundred runners and beat it with something to spare.

After race three FVS were three points behind Bishops Stortford but with this tremendous turnout and many fantastic runs they caught and beat them to climb to second in the league and PROMOTION to division one.  In the end the Spartans had 34 points to 31 for Bishops Stortford and a superior score of 2,388 compared with 2,699.

Fairlands females WON on the night by an important margin of seven places while their men were second.  The veteran men won their category and the women were second.

There were too many great performances for one release but they included GAIL MACKIE taking a big 1 minute 59 seconds off her already impressive 10K personal best (PB) to be second woman overall in 41 minutes 8 seconds.  ASHLEY KING chased her in with 41:26 and fourth place with SUZY HAWKINS sixth and third women (35 plus) in 41:55. 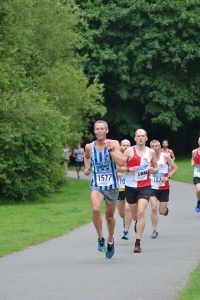 There were two Spartan top ten places in the men’s race.  SIMON JACKSON was fourth in 36:04.  Only thirty seconds behind JASON ANDERSON was tenth in 36:34.  ADRIAN BUSOLINI made the men’s “A” team cutting his personal best by1:30 giving him his first sub 40 time – 39 minutes 52 seconds.  Any improvement at that level on that course was a major achievement.

Both the other local clubs remain in Division Three.  Now’s a great time to join Fairlands Valley Spartans.  Have a look at www.fvspartans.org.uk   Their celebrations will continue at the mid week mob match in Welwyn Garden City on Thursday 11th July plus there are rumours of a party….

(Mid Week Race Four results for all 45 women and 64 men can be found near the end of this release).

Ards Half Marathon – Home for Hazel

On Friday evening, Cathy Craig and Hazel Smith set off to run a hot and hilly half in Hazel’s birth town with their Cathy’s son / Hazel’s brother Paul Craig from Suzhou in China.  The Ards Half in Northern Ireland was on hilly course and started with a three mile hill up to Scrabo Tower.  Hazel was pleased to finish in 2:05:37 with Cathy coming in with 2:26:55.

YUKO GORDON and JIM BROWN enjoyed Friday lunchtime’s Last Friday of the Month 5K race in Hyde Park.  Jim might have been feeling a bit jaded after the mid week race less than two days before, not so Yuko who achieved the highest age graded score in the race 93.7% with a time of 21 minutes 55 seconds.  This time the two lap version of the course was used.  In the warm, sunny and breezy conditions Jim finished with 25:51.

The Fairlands Valley Challenge off road events are coming up soon on Sunday 21st July.  They start and finish in Stevenage.  Have a look at www.fvspartans.org.uk  The Stevenage Half Marathon will be on Sunday 3rd November.

Thankfully the temperature had dropped for the Herts Hobble based in Buntingford.  The 26.7 mile route took in the villages of Anstey, Barley and Reed, going through some glorious Hertfordshire countryside.

Sharon and Mike Crowley walked round together in 7 hours 43 minutess, and Mike Newbit finished in 7 hours 47 minutes.

On a very warm and sunny Saturday morning, 31 Spartans were in action across 11 separate locations.

Congratulations to Mark COOKE (24:12) on completing his first parkrun, running at Stevenage this week.