STUART HAYCROFT led the Spartan contingent in the 10 mile race at the Lee Valley Ten Fest and was 6th overall and second M40 finisher in 1:02:49, a new Personal Best. DEAN CARPENTER finished in 1:05:23 which smashed his previous PB, set in 2013, by over two minutes and ensured he finished 4th in the M40 category. JAMES KAY reported that he didn’t have the fitness to really push on but nonetheless finished in a creditable 1:09:12 for a PB by well over two minutes. 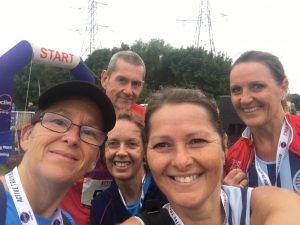 KAREN ELLIS said that it was a wet start but still very warm in running and she enjoyed the lovely two lap course round the park in finishing in 1:23:46 to be second in the W50 category. MARIA THORNE completed the ten miler in 1:44:59.

After finishing Adrian said “We were all happy to take the incessant rain over Thursday’s 38 degree record temperature. There were plenty of highs and lows, mainly in the form of hills; but, as ever, the greatest high from running an ultra comes in the form of the post-race meal: satisfaction on a plate!”

Last Friday of the Month

After failing to finish the last race he started JIM BROWN took the first mile of Friday’s 5K very steadily then joined up with a couple of friends to cruise to the finish in a time of 26 mins 32 secs.

Heatwave gave way to a cooler and wetter Saturday morning but that didn’t deter 39 Fairland Valley Spartans heading out to run at 11 different Parkrun venues.

John ROXBOROUGH tried out a new venue at Gadebridge and Matt CLARKE completed his 30th Parkrun at Stevenage.