Fairlands Valley Spartans women’s team won the four fixture EMAC track and field series for the Central Division and will proceed to the East of England final in Milton Keynes on 22nd September.

EMAC organise events for veteran men and women aged 35 and over in the East of England.  The Spartan men’s team were fourth.

It was surprisingly warm and humid for Sunday morning’s 10K race in St Albans.  It was mostly on a surfaced former railway line with the potential for some very fast times.

LEE PIROTH had a great run with a new personal best (PB) of 55:39.  He was surprised as it was a very hot race!  Lee said it was a great little race with a super cool medal 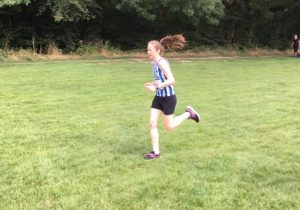 After recent mishaps JIM BROWN was very happy to finish a 10K without too much twanging and yonging.  Negative split but sensible enough not to try to chase down a few in the last 400 metres.  He was third man 60 plus in 52 minutes 9 seconds.

ASHLEY KING was fastest of the ten Spartans.  She was sixth senior woman in 42 minutes 23 seconds.  Ashley was 46th out of nearly 500 finishers.

Showing that her running mojo has definitely returned MARIE COLUCCI won the Spartans Handicap 5K event on Thursday evening.  She finished in 23 minutes 35 seconds, 3:40 ahead of handicap.  Debbie Blantern was second woman (third overall) in a new PB time of 27:53, and Grace Brown was third woman (5th overall) in 25:07, 1:38 better than handicap.

Fastest runner was Ciaran in 17:24, with Paul Shelley second quickest in 19:25 and Grant Ramsay third fastest with 19:49.

There were also PBs for Peter Jennings and John Harding, a year best time for Steve Pike, and Matt Clarke improved on his July Handicap 5k time by 28 seconds.

92% of finishers were within two minutes of their handicap set and the time difference between 3rd – 23rd position was just 3:14.  There were 25 finishers.

The  final Handicap 5K of 2019 will be on Thursday evening 12th September.

In handicap events the slower runners start first with others following at intervals determined by their recent times.

It was Stripy Saturday (first PR of the month in Stevenage wear your stripes!) and Gail Mackie was first lady in 22:34 in her 51st parkrun.  There was a PB for James Kay (19:29) and he finished in 6th place.  Steve Pike and Sarah Pike ran their first parkrun together.

Barry Osborne got a PB (22:50) at Panshanger.  Not a Spartan but Annabel Gummow, the Stevenage ladies record holder, was first overall missing the course record by 2 secs!

In North Wales Nicola Hatherley ran in Plas Heli Cyf in Pwllheli with the course being run entirely on sand.

Furthest afield was John Holmes running in Warsaw joining only 40 others.  He finished in 23:21.

A total of 65 runners took part.

A total of 41 runners took part.