On the day that the Parkrun World Record for women was reduced to 15 minutes 45 seconds by Lauren Reid in Parramatta several Spartans were racing around their virtual Fly 5Ks, (not) Parkruns or enjoying training runs.  This was the Spartans’ Stripey Saturday. 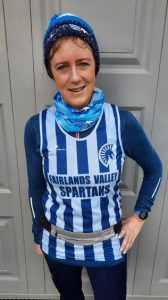 Attendance for the 38th Fly 5K reached a new record of 410 as runners seek motivation in the continued absence of Parkruns and “real” races.

This time there were a magnificent seven Spartans.  This time three of them got into the top half of the field and two reached the milestone of their 20th Fly 5K.  Having followed the Spartans 5K improver programme JIM BROWN was pleased to get under 25 minutes for the first time in a while with 24 minutes 53 seconds which gave him 171st overall and second in his category.  He was running his twentieth Fly 5K.  MARIAN MORLEY was running her first Fly 5K and put in a tremendous effort with 25:06, second in her category and 180th overall.

Next was NICK KLEANTHOUS in 26:08 for 202nd.  NICOLA ANDERSSON was the second Spartan running a twentieth Fly 5K.  She finished with 27:47.

PAUL HOLGATE and LIZ CARVELL completed the Spartan team with 29:29 and 31 minutes 23 seconds.

It was also the day for Fly 5Ks inter-club competition and the Spartans try to get a complete team of finishers.

This was the 11th Fly Inter Club competition and this time each club had to have at least five finishers including at least one female and one male.  The Spartans had four women and three men.  They were 11th in the 11th competition with 595 points. 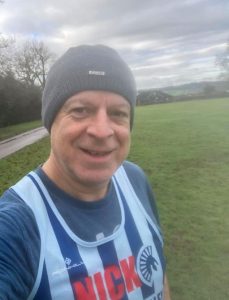 At the end of Week Five into the Virtual Coast of England Challenge, on Sunday, there were now 18 Spartans taking part with BRIAN WHITE continuing to lead the way 772 kilometres into the challenge at Poole on the South Coast.  PENNY SCHENKEL has already completed 640 km and is between Dawlish and Exmouth with SHARON CROWLEY at Plymouth (540 km).  JIM BROWN is between Fowey and Looe in Cornwall on 512 kilometres.  CATHY CRAIG (450 km) and KEN JUDE (444 km) are near Falmouth and PAUL HOLGATE (362 km) is at St Ives. LIZ CROWLEY (346 km), TRACY PEZ (344 km) and LIZ CARVELL (340 km) are between Newquay and St Ives and HAZEL SMITH is coming into Newquay. JON SYPULA (265 km) is at Bude and KERSTIN WEINER (248 km) and LEE PICKERSGILL (229 km) are between Ilfracombe and Newquay. Meanwhile ANDY PRIOR (177 km) is approaching Ilfracombe with WENDY THARANI (158 km), SIMON SYPULA (69 km) and LISA JERROM (20 km) on their way to Ilfracombe.

The challenge started in Bristol and goes anti-clockwise around England.  The total distance will be almost 3,000 kilometres – 2,970 kilometres – running, walking and cycling all count towards the totals.  The team total is already 5,521.4 kilometres but who will finish first?

Virtually nothing stops Fairlands Valley Spartans and they have now run more than 19,000 miles in their race across North, Central and South America.  Lockdown 2 – Briefly Tier 3 – Now Tier 4 and they continue into 2021.

Having covered the USA and Canada they are now on the Pan – American Highway through Mexico.  A tour of South America will follow.

Chichen Itza in Mexico was visited and on Sunday they were due to reach Cancun which has a marathon.