The FVS Cross Country Challenge results are in.  In this event Spartans were challenged to run five kilometres and/or five miles on tarmac in November and see how close they could get to those times cross country in December or January when the ground was likely to be quite soft.

There were 18 finishers in the 5 mile event and 22 for the 5 kilometres.  The women’s event was far closer than the men’s, with some ladies even beating their road times in the mud!

The leading places in the 5 miles were:

Ada Urbonaite-Janusiene won the women’s competition by ONE second beating her road time by 2mins 25 seconds; Linda Nolan was second, 2 minutes 24 seconds quicker; and Jan Fry third with 2 minutes 53 slower.  Normally you would expect the cross country times to be slower.

KEN JUDE won the men’s contest with a cross country time 2 minutes 14 slower than on road.  PETER CARPENTER was second 3 mins 52 slower.  JIM BROWN who took the running in snow on KGV field option was third man at 4 minutes 18 slower

Organiser NIKKI WILBY congratulated everyone who took part – She hoped everyone enjoyed it and that it encouraged some more to go out and get muddy.  The Spartans hope they can get to enjoy some real cross country races next winter.

It was seriously cold on Saturday morning but while overall participation fell from 410 to 307 the Fairlands Valley Spartans contingent increased from seven to eight!  Five women and three men.

JAMES McSWEENEY beat the chill with a new Fly 5K personal best (PB) of 23 minutes 5 seconds.  He was 66th overall.  Despite a short section of walking to negotiate ice on Grace Way JIM BROWN won his category with 26 minutes exactly.

Next came organiser of the day PAUL HOLGATE completing his 38th Fly 5K race in 30:31.  Feeling a long way from the southern hemisphere PENNY SCHENKEL came in with 31:21.

TESSA STEPHENSON was running her second Fly 5K and reduced her PB to 31:37 and BETH FOLEY ran her third in 37:10.

The landmark 40th Fly 5K event is this Saturday.

These are virtual events.  Everyone runs between 8a.m. and 12 noon but in different places and only in ones and twos.

Race Around The Coast of England Virtual Challenge

The 18 Spartans continued their quest to complete the 2,970 km around the coast of England by the 31st December.  Following an anti-clockwise route starting from Bristol, at the end of week six, BRIAN WHITE is through Portsmouth on the South Coast, 901 kilometres into the journey, with PENNY SCHENKEL closing in on Weymouth (720 km) and SHARON CROWLEY close to Dartmouth at 620 km.

In addition to those combining Fly 5Ks three other Spartans ran (not) Stevenage Parkruns.  They were PAUL JENNINGS 27:35; ALISON SHELLEY 27:48 and NICK KLEANTHOUS 29:54.

And in the Vale 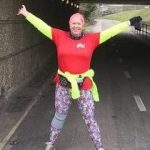 BIGGAR and PAM BENTLEY-TAYLOR followed a single lap course around Stevenage.  They both finished in 3 hours 10 minutes.  It was a first 13.1 miles for them but although it was windy, cold and hard work they both loved it.

Virtually nothing stops Fairlands Valley Spartans and they have now run nearly 21,000 miles in their relay race across North, Central and South America.  Lockdown 2 – Briefly Tier 3 – Now Tier 4 and they continue into 2021.

Having covered the USA, Canada and Mexico they are now close to San Jose in Puerto Rico.