GRANT RAMSAY was quickest of the three with 37 minutes 9 seconds winning SILVER in the veterans’ championship (40 plus) and BRONZE in the open championship.

The next Spartan in was ANDY JAY taking GOLD in the men’s fifty plus race with 48 minutes 48:42 seconds.

The Spartan coming away with the biggest smile on his face was JIM BROWN.  In the absence of anyone of similar ability on the track he time trialled round in 49:52, despite a nagging headwind on the home straight 2 minutes and 1 second faster than the same event last year for DOUBLE GOLD.  Gold sixty plus in the County Championship and GOLD in the East of England event.

Earlier Grant ran the 1500 metres in the Biggleswade Athletics Club open events.  He was first veteran (40 plus) and fourth overall in 4 minutes 47 seconds.  Coming back after an Ironman Triathlon ANN TRYSSESOONE ran the 1500 in 6.45. 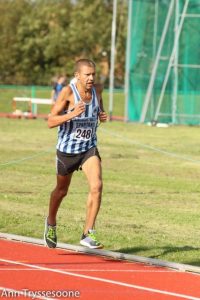 While Germany went to the polls five Spartans were running the Berlin Marathon.  CRAIG HALSEY ran an amazing 2 hours 35 minutes 4 seconds, beating the British Championship qualifying time by nearly ten minutes, to come 195th out of the 28,067 finishers so easily in the top one per cent. 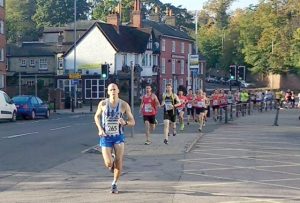 CAROLE SHELDRICK was one happy Spartan saying it was a lovely run, going sub 25 for the first time and finishing with 24:30.

21 Spartans took part in Thursday evening’s handicap 5K.  First to finish, knocking a massive 1:34 off his previous fastest FVS 5K time was JONATHAN PENNELL in a very impressive 17:52, 15 seconds ahead of second placed PAUL MAGUIRE in a course best time of 21:37 and with new member STUART ARCHER third in 20:44, 57 seconds quicker than his previous best 5k time.

The winning woman was ERICA GRAYSON in her first Handicap 5k, finishing with a time of 26:59, with TESSA STEPHENSON second in a rare handicap 5k appearance in a time of 27:36 in her first 5K for 3 years.  SUE HAMER was third in a year’s best time of 28:25.

RUTH REILLY ran a stunning Ealing Half Marathon in 1 hour 37 minutes 10 seconds with JACKIE DOWNES racing round the same event in 1:56:39.

The Enigma Marathon is seven and a bit laps around Caldecotte Lake in Milton Keynes. On a warm day, ROGER BIGGS struggled with the ups and downs of the course, but kept going to finish the marathon in 5:43:50.

PETER CARPENTER reports that the St. Paul’s Waldenburu 10K is a fairly low key event but enjoyable with a beautiful route – not made for PBs but to enjoy the view going up and down hill!

With Spartans racing in Berlin, Hitchin and on the track this weekend there were only two “away” parkrun performances this weekend. TIM ROBINSON visited Pymmes for the first time and was 22nd in 24:46, while DARRYL STEVENS was 50th at Brockenhurst in 40:51.