Now the marathons are coming thick and fast with Spartans at Boston UK, Brighton, Goodwood, Paris, Peterborough, and Rhodes.  Training with Fairlands Valley is really paying off as there was a string of personal bests and first time successes.

TIM SABAN had a great run at the new Peterborough Marathon.  He came in 17th with 3 hours 24 minutes 23 seconds and was second in his age group.  There were 177 finishers.

Because it was the first running of this event the organisers only released around 300 places. So, said Tim, it was more like a mid week league race, just marathon distance.  By mile 5 Tim said he was pretty much on his own the rest of the way.  He was very happy with how he ran, particularly after last week’s effort. 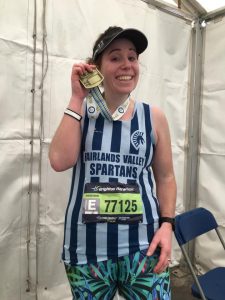 “My marathon journey ended with a 6.20.53 tough run.  But it all started back in January when I began my training with the first run!  I somehow managed to injure myself, which turned out to be a thigh strain. Unfortunately, it was not going to be a quick fix.  I had weekly physio, sports massages (some of them very painful) and lots of strengthening exercises to do. I had to pull out of a 10k race in February and then faced the prospect of not running the Welwyn half in March. I was determined to run it however and between my physio/pt we came up with the plan of run/walking the race. I managed to finish in just under 2 1/2 hours, so was really pleased with that result!

Now the hard work needed to start. I had 4 weeks in which to get from doing 13.1 to 26.2 miles. I had never run anything over 16 before, so it was going to be tough. I did 17.5 miles the following weekend, then 20 the week after that, before starting to taper. That was it, I had done as much as I could. I was going to follow my plan of run/walking and just take it as it comes. The day didn’t start off as planned, I was camping with friends seven miles out of Brighton, which meant a train ride and then a short walk to where some other friends were staying, opposite the start.  We missed a train by a few minutes and had to get the next one (half hour later), then walked the wrong way from the station (when we followed someone who thought she knew where she was going. She didn’t!)  Anyway, we eventually arrived at the hotel and it was a quick dash to get changed.

The atmosphere in the park was amazing and we all set off. I was feeling quite comfortable at my chosen pace and had no worries.  This was fine for about 10 miles, when my watch gave up the ghost and everything changed. I couldn’t follow the run/walk plan properly, so I ended up walking more than I should.  I felt rough and was struggling, but determined to get as far as I could. I got to the halfway point and nearly gave up. I was going to find a medic and stop. But then I thought of all the people following me and all the training I had done.  I battled on, through the strong wind and had a conversation with a couple of lovely guys who were struggling as well.  I got to the 20 mile point and thought however long it took, I was going to finish.  My phone was nearly out of battery and I was relying on messages from my husband who was tracking me at home.  I reached the final stretch and was so pleased that I could see the finish line.  Although I had walked the majority of the race, I did actually manage to run across the finish line.  After that, everything is a blank, until I saw the friends I had come down with and then just burst into tears!  It wasn’t pretty and it wasn’t fast, but I can now say I’ve done a marathon!!

A quartet of Spartans ran the incredibly flat Boston Marathon in Lincolnshire.  The wind blew at times but the temperature was perfect in this it’s fourth running of the event that always takes place the day before the ‘other’ Boston marathon.  There was a really friendly community feel and is definitely an event to consider for those chasing a personal best, in fact two of the four FVS running achieved that feat.

Spartans are taking part in the Boston USA Marathon which is on Monday.

RICHARD COWLISHAW completed his first marathon, in Paris, in just 3 hours 46 minutes 39 seconds.  He said, “Never thought I could achieve that!  There were perfect running conditions cool, blue sky and the sights of Paris.”  Also in Paris ROB WRIGHT improved his personal best by 4 minutes 10 seconds to 4 hours 31 minutes 57 seconds.  Rob said, “Paris marathon – what an amazing marathon to do!  Definitely one to tick off your bucket list for marathons to do!  The crowds are amazing and give you great support such a friendly atmosphere!   Can’t wait to go back for the 50th.”

ROGER BIGGS was in Rhodes at the weekend to run a marathon on his 34th different island.

The marathon took place on the Northern part of the Island, within Rhodes Town. Hugging the coast, the course was Basically 2 laps, where each lap was 2 out and back sections.

In addition there was a short out and back around the famous Mandraki Port (featuring two statues).

Roger completed his marathon in a time of 5:52:40, comfortably inside the time limit of six hours.

Despite a few undulations PENNY SCHENKEL improved her 10K time by 2 minutes 23 seconds at the Flitwick 10K in Bedfordshire on Sunday morning.  She came 401st out of the 729 finishers in 55 minutes 25 seconds.  A well paced run just inside her 5:36 per kilometre target with a high speed swoop down the last 400 metres to the finish.  JIM BROWN was 400th in 55:20.

On Saturday 13th April Sharon and Mike Crowley did the Calderdale Hike.  That was 26.9 miles in 8 hours 29 minutes, with over 3,000 feet of climbing.  It was a cold and blustery day, but dry under foot. The route took in part of the Pennie Way, hills, moors, reservoirs, and crossed the M62.  Sharon was in the top five women.

Valleys and Views Off Road Marathon

Yesterday the gang travelled to Corby to complete the Valleys and Views off road marathon.  As the name suggests the route was beautiful but very hilly in places.  Karen Liddle, Tricia Hopper and Barry King finished together in 6.28.54 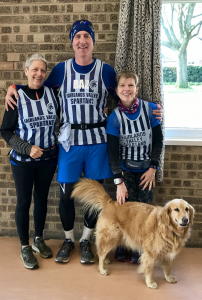 Spartan DAVID BOWKER took part in the Herts County 10K racewalking champs held in Battersea Park.  He was sixth overall in the race and third county finisher in 1 hour 11 minutes 55 seconds with one warning.

The award for furthest flung and top placed finisher goes to Stuart Haycroft.  Stuart was 4th at Uvongo parkrun near Durban in South Africa.  His time 19:58.

Steve and Monica Smithson were first timers at Wimpole estate finishing in 23:30 and 30:06 respectively.

Just one Spartan at Panshanger.  Or more accurately one Spartan and his dog.  Tim Robinson and Oscar came in 27:53.

A total of 76 runners took part.