42 Spartans finished the London Marathon, 45 more FVS volunteers were helping at the finish and there many more around the 26.2 mile course encouraging runners.

The 42 men and women were all ages, abilities and widely different experiences.  More than half the Spartan successes were women.  The club is a fantastic place to go if you want training and encouragement as you prepare for your first marathon.

A 19 minute improvement from an already high level is a fantastic achievement and MICHELLE REEVES took her personal best (PB) down to 3 hours 14 minutes 2 seconds.  That gets her under the 3:15 qualifying time for the British Championship.

The fastest Spartan was JASON ANDERSON who improved his PB by 5 minutes 56 seconds to 2 hours 46 minutes 32 seconds.

GRANT RAMSAY started his London Marathon career with 2 hours 57 minutes in 1999 and that’s what he ran on Sunday.

GAIL MACKIE improved her marathon PB by 7:26 finishing in 3:20:56 and ASHLEY KING ran her first marathon in 3 hours 32 minutes 58 seconds.

KAREN BROOM ran the VMLM for Age UK and had a amazing day. She finished in 5.09.03 which gave her a 10 minute PB and broke her record for the course by 40 minutes. She said, “I feel absolutely amazing and so bloody proud of myself.”

JACKIE DOWNES said, “I had an amazing day with a few tough sections near the end but Jim Brown and Kirsten Weiner gave me some words of encouragement.  I’m absolutely over the moon to achieve an 11 minute PB at my third London marathon especially as this was three weeks following a 50 miler ultra over the South Downs where I achieved a 10min PB under the guidance of FVS ultra legend John Nelms.”

SARAH SAPSTEAD was chuffed to bits with her new PB of 6 hours 5 minutes knocking a whole 43 minutes off last year’s time … gutted I didn’t come in under the 6 hourss on my chip. although that was more than made up for by the cuddles from her boys on the way round.

Despite a bad week following a reaction to an insect bite JIM BROWN’s race went pretty much to plan.  Wearing a 3:55 timing band he finished in 3:52:54 even though he had to stop for four minutes stop at 12 miles.  That’s a Good For Age time with seven minutes to spare and more than thirty minutes faster than in the 2018 event.  This was his nineteenth London Marathon.  He commented on the congestion running in the 3:45 to 4:00 bracket.  “In previous years” he said, “you could expect to be able to get into a steady rhythm after about three miles as the race sorted itself out and you’d worked your way past those who had started I appropriate zones then you’d be weaving around again in the last four miles as people tired.  This year there was no real let up and a lot of energy was wasted slowing down, speeding up, dodging about and suffering a fair bit of barging and collisions.”

LIZ CARVELL completed her second London Marathon in 5 hours 29 minutes.  She said “I must admit I didn’t enjoy this as much as last year despite the heat in 2018.  I got a bit frustrated weaving in and out of people in the first half especially where by the blue start runners merged with the reds.  I was following 5:15 pacer but when we met the reds there was a 6.00 pacer so runners were a lot slower causing a bit of congestion.  Also some groups were taking up the whole road.  Still an amazing experience to do once, but IF I ever do another marathon it won’t be London. Quite happy with time considering I walked a lot at the end.”

LEANNE ANGEL and CHARLOTTE KEARNEY supported each other all the way round and finished in 4:51:02 and 4:51:03. 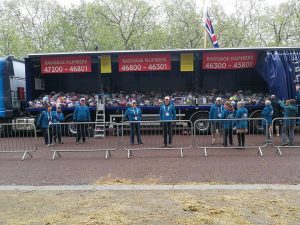 Not only do Fairlands Valley Spartans help to train many people for successful runs at the London Marathon then put a lot into the event year after year to help make it a great day for more than 42,000 runners.  This time 45 FVS volunteers were on the Mall, just after the finish line, helping to make sure runners got their kit back.  It was a long more than twelve hour day from them between getting on the hired coach and getting back to Stevenage.  They were released from duty in the Mall at 6.30p.m.

(Times for all 42 Spartans can be found near the end of this release).

On Sunday NIC PATTMAN completed the second Hoohah race, a 10K around the Childerley Estate just outside Cambridge.  It was the first off road running that she’d done and she absolutely loved it!  Her time was 1:06:36 – not her fastest 10k but not far off.

Now the focus changes a little for Fairlands Valley Spartans.  The track and field season starts with a league match at Sandy on Wednesday 1st May and the County 1500 metres Championships and several veteran events at Stevenage on Monday 6th May; then the club starts its 2019 campaign in the Mid Week Road Race League with an event over about 10K at Harpenden on Wednesday evening 22nd May.

Despite Storm Hannah’s arrival overnight, 27 Fairlands Valley Spartans made it out to the multiple Parkrun events taking place this week.  Finishing first in a field of 195 runners, and with a new PB time, STUART HAYCROFT completed the Grey Goose course in 18 mins and 33 secs.  JOHN HARRIS was 6th overall in Letchworth in 21 mins and 18 secs.  In Stevenage, NICK KLEANTHOUS completed his 50th Parkrun since his return to running in January 2018, dressed as a penguin, in 27 mins and 45 secs.  He was joined by DEBBIE BLANTERN who ran her 20th Parkrun Event in 30 mins and 55 secs.  RICHARD COWLISHAW ran his first ever Parkrun on the Dishley course, coming 16th from 233, in 21 mins and 47 secs.

Attendance at new locations saw JOHN ROXBOROUGH finish 16th overall at the Sunny Hill course in 32 mins and 33 secs, STEVEN DOBNER and DAVID PATTMAN run in times of 26 mins and 54 secs and 26 mins and 55 secs, respectively, at Wimpole Estate, THOMAS SAUKA complete the Jersey Farm event in 27 mins and 30 secs, and TRACY STILES run at Luton Wardown in 32 minutes and 14 seconds.

Spartans at the London Marathon (VMLM) 2019