At the Bedford Autodrome Running Grand Prix DANNY SUTTON completed his 2nd marathon in a new PB of 3:53:10 – a massive 70 minute improvement over his first in London in the spring. He finished 18th of 42 men. The conditions were great and he gritted his teeth to get the exact time he was aiming for! 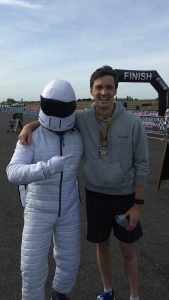 CALLIE CHAPMAN complete the half marathon in 2:13:39

VERITY FISHER completed 10km at the same event in a year’s best of 48:59 with negative splits so was really happy with her time, finishing as 16th lady out of 135. ROWENA RUTLEDGE finished in 57.08 with KYM MARTIN finishing in 1:09:04.

Sixty-six Spartans ran in the Standalone 10k, which this year incorporated the county veteran’s championships. 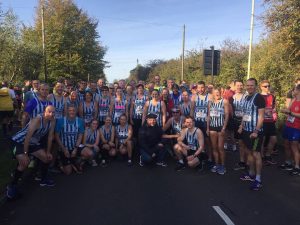 Finally it was tremendous to see a number of Spartans running their first 10k race with the club, including ADAM JENKINS, MATTHEW PATTMAN, HOLLY ARCHER, TAHER THARANI, NICOLA HATHERLEY and NIKI PLUMB, all setting new baseline PBs to work on improving going forward!

Commenting on his result Andrew Smith noted “I was 10 minutes quicker than 2015 .. but I did start drunk that year!”

For Vicky Archer it was both her first ever race and first in stripes after joining the club’s starters group following the Spartans trip to Edinburgh in May where she watched husband Stuart in the marathon. She said “I was very proud to be wearing my stripes! Thanks to the amazing Jenny Garrett I managed 1hr 2mins which for my 1st attempt is amazing and of course a PB. Very proud of myself.”

Speaking about his PB James Kay said: “I was really pleased with my time and for going sub 40. It was great running with Danny Scanlon and Todd Gray who pushed me along. Four Spartans finished within 23 seconds in positions 70-75 all sub 40 mins in great times. A big thank you to everyone who supported along the course as it made a big difference!”

A full table of Spartans results and times can be found towards the end of this release.

TIM SABAN ran the Chester marathon in a chip time of 3:24:36. Tim reported afterwards “I found the hills a little tough towards the end. But I enjoyed it nevertheless. It was a year’s best and course record by 6 mins on previous attempts”.

Also taking in the road trip to Chester’s Roodee was ERICA GRAYSON who ran in the metric marathon, a 26.2k race. She was happy with her time after down-trading from the full marathon after a cold and life meant her training had not gone to plan.

HELEN WHITEHURST reported she was happy with her time of 2:13:19 at the Oxford Half Marathon. Her goal was to complete without walking, and in a time of sub 2:30, which achieved in some style. The runners at the event have yet to receive medals, as they got caught in storm Ali had not cleared customs in time for the race!

Jim ran the Half Marathon, and won the Men’s Vet 60 category in a time of 1:48:27, finishing 54th overall. The race was run down a hill and then run back to Mount Cook Village with a brutal finish. Penny celebrated her birthday by winning the Women’s 40 plus category in the 5k by a wide margin in 28:26.

JONATHAN JONES ran the half marathon at the Bournemouth Marathon festival, scoring a new PB of 2.09.34

HAZEL JONES ran the 10K at the festival and completed in a new PB of 01:14:45. SHELBE MOONBEAM also notched a new PB in the race. In a solo outing she showed determination to complete in 1:02:09, knocking over 5 minutes off her previous PB set in Regents Park a month ago.

Kempton Park is the scene of many memorable chases over the years as Desert Orchid, The Fellow, One Man and Kauto Star won one one of racing’s greatest prizes multiple times. But this week it was the scene of a new “chase”, a 10k event. KAREN and TREVOR BROOM travelled to Sunbury for the first running.

We are both happy with today results as we both ran Berlin marathon only 3 weeks ago.”

Lee Valley Race for Life Half

MARGARET MONTGOMERY reported that Lee Valley was a lovely venue for running despite the hill at about mile 4. “There was lots of lovely support out on course too.”

It was the final race of the Hatfield 5k series on Wednesday night, in much calmer conditions than the middle event was run in. GRANT RAMSAY was the fastest Spartan finishing 6th in 17:06. CHRIS HOLLAND was next, smashing his PB by 29 seconds to set a new mark of 21:21.

A full table of results can be found towards the end of this release.

Parkrun Round Up Saturday 6th October

On the weekend that Parkrun celebrated its 14th birthday Stuart HAYCROFT was first at Stevenage Parkrun in 18:26.  Ashley SCHOENWETTER was first female and fourth overall at Barclay in a time of 21:22.

There were course PBs for John ROXBOROUGH at Heartwood Forest, Michelle MARCHANT in St Albans and Karen ELLLIS in her 4th Parkrun in Stevenage.