The race started in Eastbourne and immediately climbed 100 metres in the first kilometre to Beachy Head.  During the climb the runners are entertained by a bag piper.  From there the course headed inland up and down and across the South Downs, through villages and up steps, before returning to the coast at Cuckmere Haven to complete the final seven miles over the Seven Sisters back to Beachy Head.  One of the UK’s hardest but most picturesque marathon routes. 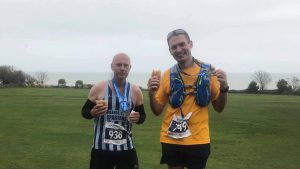 The event was fully Covid secure and the organisers had worked hard to create a friendly and relaxed event while still maintaining precautions.

Tim and Chris’ aim was to complete in 5 hours 30 minutes but with winds gusting to 45mph on the tops of the downs, and heavy rainfall in the days before making the ground very soft in places that was going to be hard.  Progress across the tops of the cliffs was quite difficult in the final miles and the total height gain of over 1,000m took its toll on tired legs.

Nevertheless, the last kilometre was steep downhill and a ‘sprint’ finish saw the pair finish in under six hours.

The Fordy Runs Rock Up ‘n’ Run event was a beautiful Autumnal covid-safe run along the River Lee tow path starting and finishing from Stanstead St Margarets.  It was the first half marathon in a series of six monthly runs from now to March 2021.

Spartan John Roxborough ran the 13.1 miles in 1:44:53.  He said ‘Fitness faded as expected and the last four miles were tough. Interesting race, each runner headed off 30 seconds apart. Most of the paths were wide enough for people to pass on the out and back sections. Lots of puddles to dodge along the route! Worth going back and trying again next month.’

On Saturday JOHN HARRIS ran the Suffolk Ultra 33 miles event in 5 hours 23 minutes on a multi terrain course.  It included a fall in bushes and a water feature.   He was first Male Vet 55 plus.

Sharon and Liz Crowley completed the virtual Snowdonia Marathon in 6 hours 44 minutes. The marathon was cancelled back in July, like many other races this year it went ‘Virtual ‘ 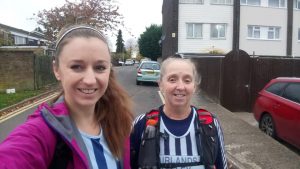 Sharon said “We were still planning to do it in North Wales, but then total lockdown happened so we couldn’t go.  So instead of a run around Snowdon it was a run around sunny Stevenage with the lovely Autumn colours on the cycle tracks.