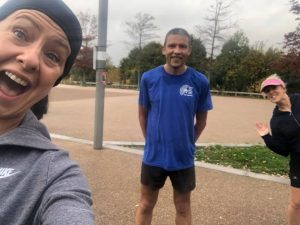 CALLIE CHAPMAN and HAZEL SMITH ran the Olympic Park 10K on Sunday in the final race before new lockdown comes into force.  The race was well managed with waves of four runners setting off at a time to complete four laps of the park.  In the warm but windy conditions Callie completed the course in 1:05:07 and Hazel in an excellent 51:23.

GRANT RAMSAY and ANDY McGUINNESS were also at the Olympic Park.  Grant was twelfth in the race with 38 minutes 13 seconds and Andy 50th in 44:14.  There were 280 finishers.

Spartan VERITY SUTTON FISHER ran a virtual marathon, only her second 26.2 miles event, on Sunday.  To raise money for Huntingdon’s Disease she ran between Stevenage and Letchworth, including the Greenway, and finished in 5 hours 4 minutes 49 seconds.

JAMES McSWEENEY ran the Adnams Virtual 10K in 49 minutes 10 seconds.  That was better than his 10K time from Standalone but this was on the flat Suffolk fens. 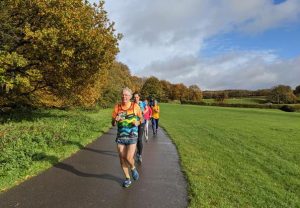 Four Spartans ran the equivalent of a half marathon in Stevenage on Sunday morning.  This was part of an effort to raise some money for the Mayor’s Charities Fund.  On an approximation of the half marathon route LIZ SMITH and JIM BROWN maintained a steady six minutes per kilometre to complete the 13.1 miles in 2 hours 6 minutes 50 seconds; WENDY THARANI went round in 2:08:54 and NICOLA ANDERSSON in 2:14:00 with them finishing in the Autumn tints of Fairlands Valley Park.  This was the first time Nicola had run that distance.  The 22.1 kilometres was verified by GPS.  Thanks to Penny Schenkel, Zander Brown and Peter Eames for making it possible.