Spartan GRANT RAMSAY has beaten three hours for a full 26.2 miles marathon in each of four decades.  His achievement was completed with a 2 hours 53 minutes 55 seconds race at the Bedford Autodrome Running Grand Prix on Sunday morning.  This was his 49th marathon.

Grant was delighted with his time of 2:53:55.  This resulted him in achieving sub three hours marathons across four separate decades (1990s, 2000s, 2010s and 2020s).  Ramsay is now in very small group of UK athletes who have achieved this milestone.

This was Ramsay’s best performance in the marathon since 2017.  The achievement has been all the sweeter following regular injury set backs over the last couple of years.. 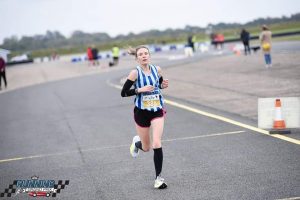 GAIL MACKIE and TOBY ECCLESHALL were running the same event.

Gail clocked in with a time of 3:11:44, a personal best (PB) by nine minutes.  She said “Having dropped out of the Dorney Lake Marathon at just under 17 miles two weeks ago with stomach cramp, I picked myself up and decided to try again.  I’m so glad.  I did it was a tough but fantastic race and I’m delighted with my new PB!”

Toby said “My time was 3:46:57.  Having never previously been able to crack a sub 4 hour marathon, I’m over the moon with the result.  In the end I actually managed to beat my PB by 26 minutes.  The conditions were perfect, course flat and the event was wonderfully organised.  Best of all, it was great to see some friendly Spartan faces on the course.

ED HARE actually set out in the Autodrome Marathon with Dave Pattman (in almost perfect conditions) just to see how far he could go with low expectations but came away with a new marathon PB by a full 19 minutes and it was his first ever sub 4 hour marathon.  He ran through the first 20 miles at a steady 8:40min mile pace with Dave pacing superbly which brought about a 14 minutes 20 mile PB and considered it job done for the day. Then Ed said, “I realised I had enough time in the bag to keep going and it was a matter of how long I could hang on for.  Hang on I did and bagged a 3 hours 55minutes 26 seconds chip time.  I was left speechless to be honest!  My first official chip time since March.  It was great to be back out there racing in what felt a fairly safe, socially distanced event village and of course even better to see some Spartans.

JIM BROWN was second overall in his race!  With his time of 2 hours 51 minutes 25 seconds for 20 miles it’s not surprising he won his age category.  With an acceleration over the last mile he beat the third placed runner by one minute.  He didn’t think he was quite ready for a marathon after a race accident a few weeks ago – now he wants one!

Thirty Fairlands Valley Spartans ran in the virtual Standalone 10K.  Many did not run on what would have been the race day, 4th October, and none used the normal course but a great turnout.

Three other Spartans joined them in the 18th (not) Stevenage ParkRun.