The Fred Hughes 10 was run in ideal weather conditions for penguins but BRIAN WHITE finished first 60 plus and 102nd overall in 67 minutes 45 seconds.  He was five minutes ahead of his nearest rival.

On a day when events like the Windsor Half Marathon were cancelled due to the weather 754 finished the race which included the Hertfordshire County Championships for seniors.

Despite the conditions JIM BROWN was 15 seconds quicker than last year with 1:23:40, just making it into the top half of the field.  GARETH COWELL finished with a useful 1:17:43.

Spartans in Spain succeed at Santa Pola.  While nine Spartans were shivering at the County 10 miles championships in St. Albans two were winning prizes in sunny Spain.

Yuko Gordon and Cathy Craig achieved first and third in their age category at the Santa Pola Half Marathon during a 27 degree heatwave.

This was Cathy’s 10th half marathon in Santa Pola in a row and marks 10 years since she became a runner.  Yuko finished in an amazing time of 1.39 and Cathy in 2.20.

The first year Cathy started running was to run this race.  (the temperature rose to 27C  not the 23C we expected from the weather forecast) and other runners from the UK had to drop out due to the heat.  Yuko was first FV65.  Cathy was 3rd FV65, in 2:20.  It was tough due to the sun and heat but better than freezing in Stevenage. 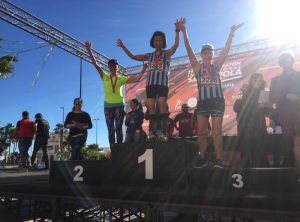 With one race to go the Spartan veteran men are third in the cross country league.  Overall the club’s men are eighth out of the 20 clubs and the women 10th.

Fairlands Valley Spartans Champions Night will be at the Cromwell Hotel, Old Stevenage at 7p.m. on Friday 23rd February.  Tickets £25.  You can find more information on www.fvspartans.org.uk

Do you have an entry to the London Marathon on 22nd April 2018?  Have you thought how you will get to London from Stevenage on the big day? Fairlands Valley Spartans have a coach from Stevenage and there are spare places.  The cost is just £10.  If you would like to join us, please contact Roger Biggs on roger@thebiggs.net.

JOHN WALSH took the parkrun PB honours for the weekend. He notched a new best at Cambridge as he finished in 42 mins 52 secs. Meanwhile VERITY FISHER went to Bedford and completed in 23:35 for a top ten finish. At Peterborough, SIMON BELL just missed a top ten finish in 19:11 while ANNETTE BELL finished 8th woman in 24:40.