After only a week Fairlands Valley Spartans returned to Cassiobury Park, Watford for a cross country race.  Seven days ago it was separate men’s and women’s races for the senior county championships, this time it was all in together over about 9.5 kilometres for a Sunday Cross Country league event. 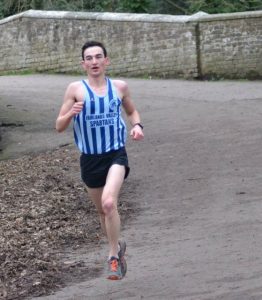 The outstanding Spartan performance came from CALLUM STEWART who was second overall out of more than 400 finishers in just 34 minutes 4 seconds for the six miles or so, but the amazing YUKO GORDON continues to astound.  She’s a veteran 65 plus women and her time of 46 minutes 38 minutes made her first female from Fairlands and eighth out of the 31 runners from the club. 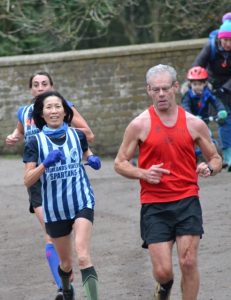 There were 17 FVS women and 14 men.  All the Spartans results can be found at the end of this release.

Fairlands Valley Spartans have entered fourteen runners for the national cross country championships on Saturday 24th February.  They will be on the tough, hilly and usually Parliament Hill Fields in north London.  The club have teams in the senior women’s and men’s races.  The final league race will be on Therfield Heath, Royston on Sunday 18th February.

Running his first ever marathon, Michael Andrews made his way through Walt Disney World, Florida in a very good time 5:14:41. Wife Aimee Andrews also in her first ever marathon persevered excellently to stay inside the seven hours cut-off time, finishing alongside her dad Paul Holgate in 6:57:09.

Do you have an entry to the London Marathon on 22nd April 2018?  Have you thought how you will get to London from Stevenage on the big day? Fairlands Valley Spartans have a coach from Stevenage and there are spare places.  The cost is just £10.  If you would like to join us, please contact Roger Biggs on roger@thebiggs.net.

Fairlands Valley Spartans applied for the England Athletics Club Run scheme in September 2017 and found out at the end of the year that they had been selected.  The Club Run scheme provides a series of three visits from an England Athletics Coach, over a three month period.  The aim is to provide some additional coaching to club members and to support coach development.

The first of three visits from coach Simon Mennell was on Tuesday night.  They was an amazing turn out for a whole club session of over 50 runners.  This was an 800 metres endurance session, with each group having a pace to aim to maintain over their reps.  Everyone enjoyed the session and benefited from Simon’s coaching.  He then spent some time with the coaches, discussing different practices and techniques.  The feedback we have received from members has been brilliant – everyone enjoyed the session and we are really looking forward to Simon’s next visit on Thursday 1st February.  Why not train with the Spartans?  Have a look at www.fvspartans.org.uk?

Best performances away from the “home” venue were by CHRIS HOLLAND, who ran 21:50 in finishing 10th at Pymmes, and DAVE SMITH who was 15th at Linford Wood in a time of 21:18.