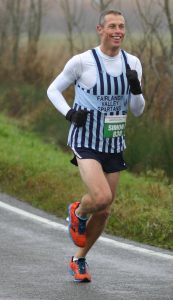 Spartan SIMON JACKSON took a fantastic top ten position out of the 1127 runners and the prize for third veteran in Sunday’s St Neots Half Marathon.  He was ninth in 1 hour 18 minutes 26 seconds.

It was windy and damp underfoot but 29 Fairlands Valley Spartans completed the race, with many great performances.

CHRIS HOLLAND ran a new personal best of 1:42:25, an improvement of 2 minutes 43 seconds.  He gained most of that in the last three miles and means his total PB improvement in two weeks of 5 minutes 57 seconds!

Spartan JAMES KILROY completed number ten of his half marathon challenge this year.

This, in 1:55:25, was his third one back after four months out injured and his times have steadily been going back in the right direction.

This was TIM ROBINSON’s third half in November for Pancreatic Cancer Awareness Month.  He finished in 1:56:08.  You can find him on JustGiving with Tim-robinson11.

All the Spartan times:

It was with some relief that storm Angus did not come too far north and was over by Sunday morning, for Liz, Mike and Sharon Crowley.  Sticking together they completed the 26.2 mile Steppingley Step from Barton Le Clay in 7 hours 59 minutes 23 seconds.  They were pleased to get in under eight hours and in daylight!

At Stevenage parkrun NATALIE LAWRENCE was first woman finisher, crossing the line in 22 minutes 4 seconds.  CLAIRE PULLEN was third in 22:51 and VERITY FISHER sixth in 24:43. CAROL PAUL finished 11th in 25:58. The other Spartan women running were CALLIE CHAPMAN (26:49), HEATHER MALONEY (30:35) and CAREN THAIN (37:08), a new course PB (personal best) by nearly a minute.

At Gunnersbury KELLY McHALE was 12th woman to finish in 24:24, while regular traveller DARRYL STEVENS was at Exeter Riverside and recorded a time of 41:50. Finally LUCY FIELD ran at Oxford, finishing in 27:28.

Many Spartans will be enjoying a busy programme of races, social and training events over the next few weeks including cross country league.  The opportunities include:

Live in or near Stevenage?  Like running?  Fairlands Valley Spartans is your local running club and is on the up!  The club was voted the UK’s Best Running Club in 2010.  It now has hundreds of members and encourages participation by all.  The Spartans have a varied training programme to suit those who want to run 5 kilometres through to full marathons.

The Spartans weekday training sessions are on Tuesday and Thursday evenings.  Go along to the new sports centre at Marriotts School – a Sports College, Telford Avenue, Stevenage (SG2 8UT) at 7p.m.  Up to five running groups go out on training nights – there will be one to suit you!

Try a few sessions before joining.  Membership is only £37 per year, £25 without UKA affiliation.  Concessions are available.  Membership forms are available on the Spartans website www.fvspartans.org.uk  Please ask if you would like a paper copy.  You can also join online.