Records tumbled in the second match of this year’s Eastern Veterans Athletics League due to some fine individual performances from the Spartans Vets team. On her EVAC debut YUKO GORDON produced the most outstanding performance in winning the W60 (women aged 60 plus) 1500 metres in 6:03.4. Not only did this beat the previous club age best by over a minute, it set a new EVAC league record by nine seconds (subject to confirmation). Her age grading of 92.6% was the best by any athlete in the match.

MONICA BROWN got her evening off to a flying start winning the W50 80metres hurdles in a personal best (PB) of 15.4 seconds and breaking her own club record. She also won the high jump in 1.30m and the 100m in 14.1 seconds (87.0% age grading). Second places in the Triple Jump and Javelin and fifth in the Discus meant she collected 36 points out of ladies team’s total score of 127. Her seventh event of the night came in the 400/200/200/400 relay, helping the W50 team to a comfortable 2nd place.

JULIE SIMMONS broke the club record for the 1 mile walk in 9:17.5, coming third in the A string race against some very strong opposition. Previous record holder SHARON CROWLEY won the B string in 11:09.6. Further ladies wins came from IRIS HORNSEY in the W60 javelin and CATHY CRAIG in the W60 high jump. Cathy also produced a fantastic finish to snatch 2nd place in the W60 400 metres. PETA WLSON, ANDREA WESTCOTT and STEPH MAYFIELD made up the W35 team and boosted the overall points total by ensuring every event in the ladies programme was covered.

In the men’s match, CHRIS WESTCOTT ran a fine 400 metres coming 3
rd in 57.1 seconds, a club M35 age best. An hour later he ran even faster (unofficially 55.8) with a brilliant lead leg in the men’s relay; STEVE MAYFIELD and MARK CHEADLE continued the good work and GRANT RAMSAY held on to second place, bringing the baton home in a new club record of 2:57.4, over 6 seconds inside the previous mark.

The club record also fell in the Javelin, with STEVE MAYFIELD throwing a new personal best (PB) of 28.98 metres for second place in the M35 category. He followed up with another PB and 2nd place in the triple jump (8.81m) and achieved season’s bests in the Discus, 400m and 100m. His 100m time of 13.1 seconds was an 83.2% age grading, the highest of the match for the Spartans men’s team.

Host club Bedford & County were comprehensive winners of the men’s match with 152 points, taking their total to 239 points and lifting them to the top of the league. Spartans were third with 97 and slipped to third overall after the two matches, with their combined total of 198 points leaving them 24 behind second placed Milton Keynes.

The Spartans women were a close second, just six points behind match winners Milton Keynes, but with 245 points to 228 Spartans remain first in the league. With third place Luton AC back on 98 points, FVS and Milton Keynes look well placed to earn the two female finalist positions.

Despite being one athlete down, the Spartans “A” team performed exceptionally well, to beat
forty other teams and win with a combined time of 40mins and 12 secs. A new course record. This was over a total distance of 12K, with each leg consisting of 1000m.

KEITH COUGHLIN competed in the Regents Park 10k yesterday, finishing sixth out of 777 with a new personal best of 36 minutes 48 seconds

ROGER BIGGS continued his quest to run a 100 marathons in the United States, with a trail marathon in the Great River Bluffs State Park in Minnesota. This State Park is 20 miles from the Minnesota City of Winona, which borders the mighty Mississippi River.

The marathon started in a thunderstorm, making the trails very muddy & slippery, encouraging the organisers to change the 16 lap course to a better surface and now 17 laps!

By halfway the storm changed to humid conditions as the sun started to come into view. Even in the storms the temperature was around 15C, by the end this has soared to 30C.

Considering the conditions, Roger was pleased to complete the marathon in 5:40:42.

On Sunday Carol Paul and Mike Newbitt ran the off road Poppyline Marathon from Sheringham in Norfolk. It was a lovely sunny day with a bit of a breeze taking in the lovely North East country side of Norfolk. Carol completed the off road marathon in 5 hours 35 minutes and Mike’s time was 6:41.

Down at Panshanger Parkrun, Mark Beasley finished 34th out of 260 runners in a time of 22:27 which is now a Parkrun PB. John Roxborough wasn’t very far behind in 44th place and gained a Parkrun PB in a time of 22:49. There was one more Parkrun PB with Tim Robinson finishing 53rd in 23:49.

Live in or near Stevenage? Like running? Fairlands Valley Spartans is your local running club and is on the up! The club was voted the UK’s Best Running Club in 2010. It now has hundreds of members and encourages participation by all. The Spartans have a varied training programme to suit those who want to run 5 kilometres through to full marathons.

The Spartans weekday training sessions are on Tuesday and Thursday evenings. Go along to the new sports centre at Marriotts School – a Sports College, Telford Avenue, Stevenage (SG2 8UT) at 7p.m. Up to five running groups go out on training nights – there will be one to suit you!

Most long Sunday morning training sessions start 9a.m. sharp. Spartan track training sessions are held at Ridlins Athletics Track, Woodcock Road, Stevenage most Saturdays from 9.15a.m. There are events to enter every Sunday. Newcomers are very welcome – those who have not yet done very much running might prefer to start with a Thursday, Saturday or Monday session.

Try a few sessions before joining. Membership is only £37 per year, £25 without UKA membership. Concessions are available. Membership forms are available on the Spartans website www.fvspartans.org.uk Please ask if you would like a paper copy. You can also join online. 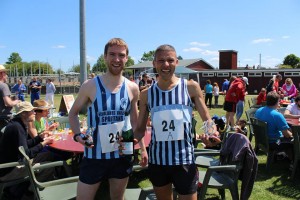 Grant and Ian collecting the team prize for themselves and Samantha Pretty – congratulations to you all.